Zero degrees separate these Upstate residents from their famous friends

Editor’s Note: Dolly Parton and Bee Gees co-founder Barry Gibb have teamed up for a remake of the Bee Gees’ classic song “Words.” The single was released on Jan. 1 and will be included on Gibb’s upcoming album “Greenfields: The Gibb Brothers Songbook, Vol. 1” to be released on Jan. 8. In celebration, we’re re-posting this story about two Upstate residents who know Dolly and Barry well.

There were so many photographs of her mom with the Bee Gees around when she was young, that Faye Ward’s daughter thought the Brothers Gibb were members of her family.

Jonathan Brashier has enjoyed many memorable moments with Dolly Parton, but the meal he shared with her in her Tennessee mountain home is the most remarkable experience of his life.

Many of us have met a celebrity or two, but few have forged relationships like Ward, of Mauldin, and Brashier, of Greenville, enjoy with megastars Barry Gibb and Dolly Parton.

“I’m an admirer and one of Dolly’s most visible fans that has been fortunate to get closer than most,” Brashier says. “I’ve been lucky enough to spend time with her and I treasure every moment we’ve shared.”

Ward agrees. “The Brothers referred to their fans in general as friends, but over the years, our group really felt that was the case.” 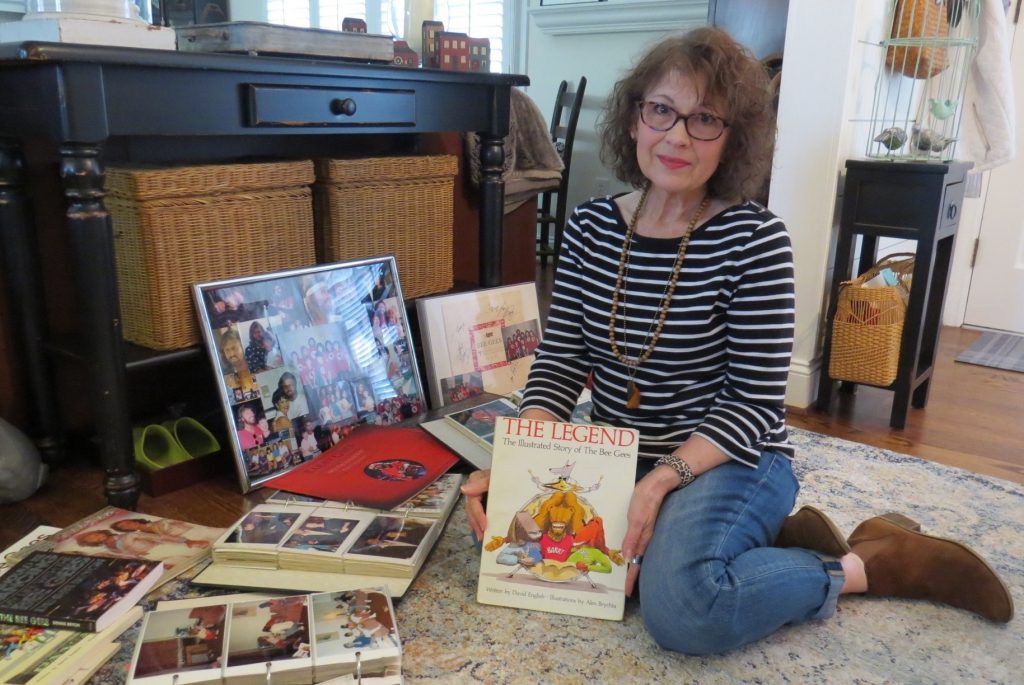 Faye Ward displays some of her Bee Gees memorabilia. 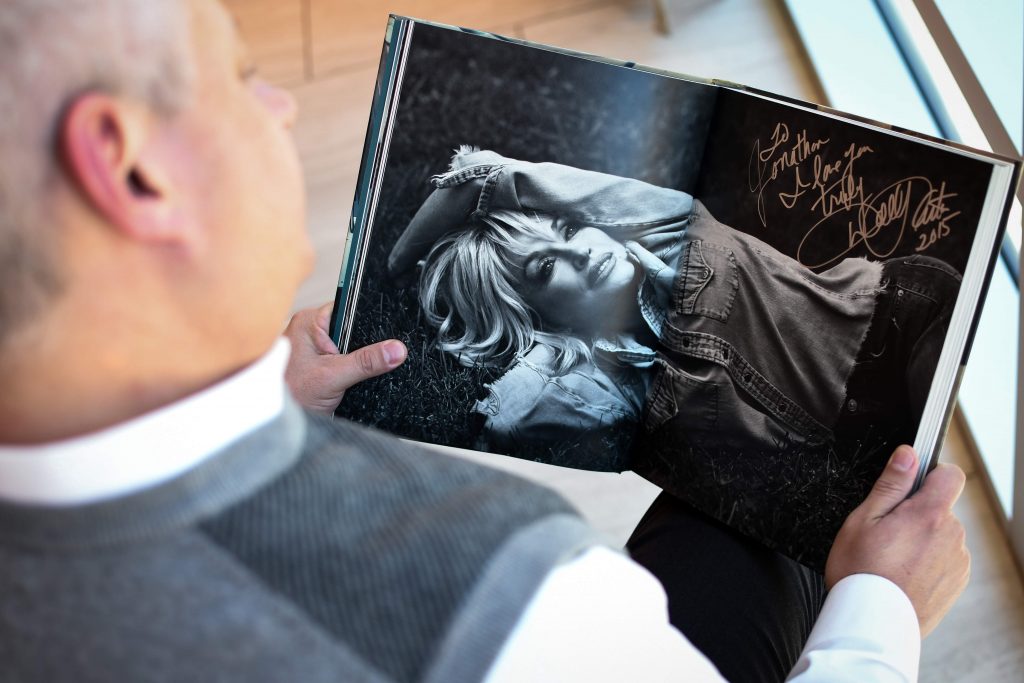 Jonathan Brashier with one of his favorite Dolly photos.

Ward remembers enjoying Bee Gees tunes in the 60s and early 70s; but with a husband and four small children, she paid little attention to the men behind the music. Then came the group’s Main Course album in 1975.

“When Main Course was released and Jive Talkin’ became a hit, I realized that was the same group from a few years earlier,” Ward remembers. “Then I saw Barry and thought that I needed to be paying closer attention.”

Ward joined the official Bee Gees Fan Club and became close with several club members. She attended two concerts during the 1979 world tour and got to know other fans. In 1981, Ward saw an opportunity to do something personal and heartfelt for a group whose songwriting and sound had so impressed her. She decided to reproduce the cover illustration of The Legend: The Illustrated History of the Bee Gees in embroidery.

“I spent so much time and effort on it that I didn’t want to just mail it off and risk it not being seen,” Ward explains. “So, I got permission from the group’s personal manager to meet with Barry’s wife and present the finished piece personally.”

Whatever her words and however she delivered them, Ward and two fan club friends would soon be on their way to Miami to meet Linda Gibb, Barry’s wife, and deliver the needlework.

“We went to Barry and Linda’s home,” Ward recalls. “Linda came out and we talked for a while, then we arranged to meet Barry the next day at the recording studio in South Beach. The rest, as they say, is history.” 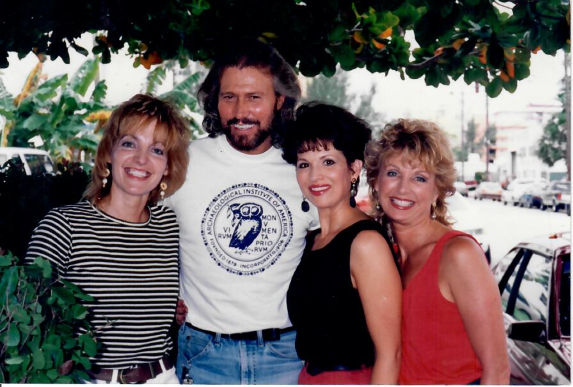 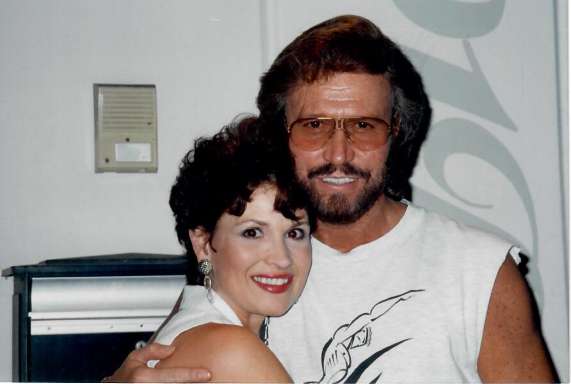 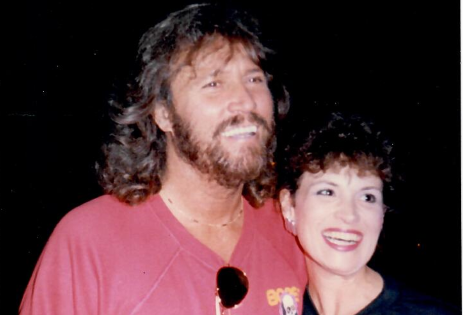 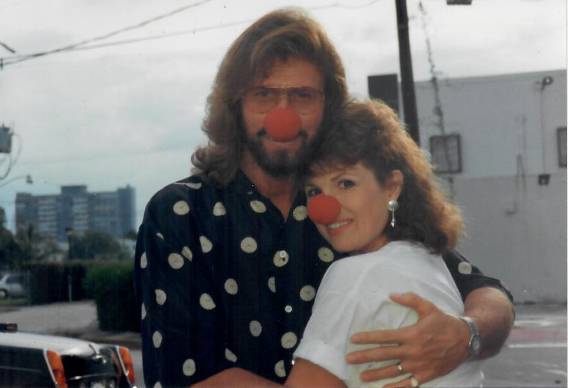 Ward would return with her friends to the Middle Ear studio many times over the years and to Miami to attend Love & Hope tennis tournaments Barry hosted, then later, the Love & Hope Ball, to benefit the Diabetes Research Institute Foundation. She and her closest fan friends dubbed themselves The Possum Patrol, complete with an official logo, t-shirts and letterhead.

“One of my fondest memories is being at the meet and greet before the 1989 Detroit show, and Mo (brother Maurice Gibb) exclaiming, ‘The Possums are here!’ Then all three brothers sprinted over to visit, leaving the local media without a backward glance.”

As an honorary member of The Possum Patrol, Barry received one of the group’s red, logoed t-shirts, and as promised, wore it on stage during the next concert. 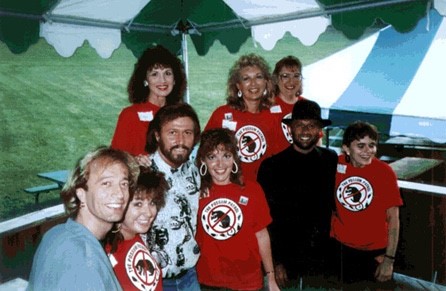 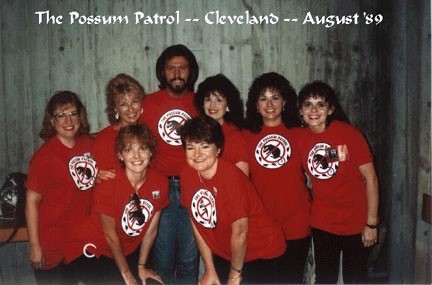 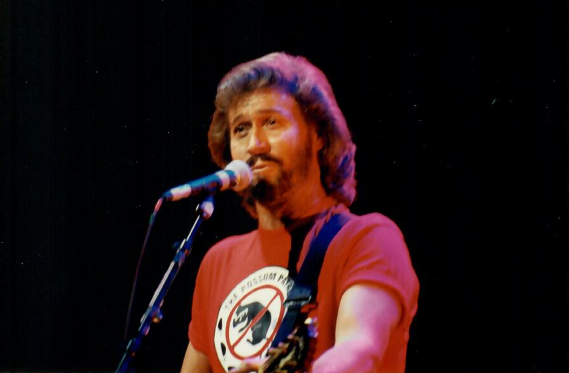 While front row seats, backstage passes, and invitations to smaller events were all Possum Patrol perks thanks to their friendships with people who worked for or with the Brothers, Ward says it is the lengthy visits they had with Barry at the South Beach studio she remembers most.

“We were just friends hanging out and talking about all kinds of things,” Ward says. “It became the most natural thing in the world.”

Brashier’s love affair with Dolly Parton began at the age of nine when he watched an HBO special starring Dolly with his grandfather.

“I remember being captivated by this person who seemed larger than life,” Brashier recalls. “I thought she was the most beautiful thing I had ever seen. From that point on, I wanted to know everything about her.”

In 1985, when Dolly and Kenny Rogers held a concert at Clemson’s Littlejohn Coliseum, Brashier was there, leaning over the railing on the front row of the balcony—captivated.

“The man sitting next to me worked at the arena and he went backstage while Kenny was performing to get an autographed picture of Dolly for me. I almost died right there.”

By the age of 12, Brashier—who knew the lyrics to every Dolly song—was a full-fledged member of the Dolly Parton Fan Club. Then, Dollywood opened. “Suddenly, we had a place to go that centered around this magical being,” he said. The Pigeon Forge, TN theme park was the place he would meet Dolly for the first time. 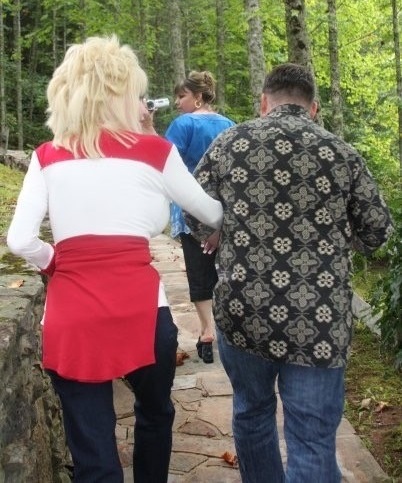 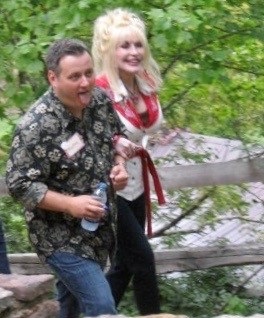 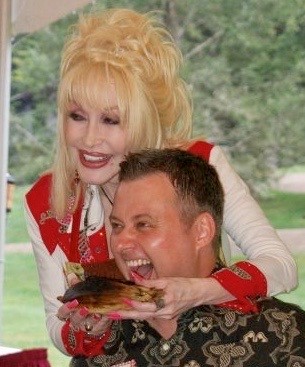 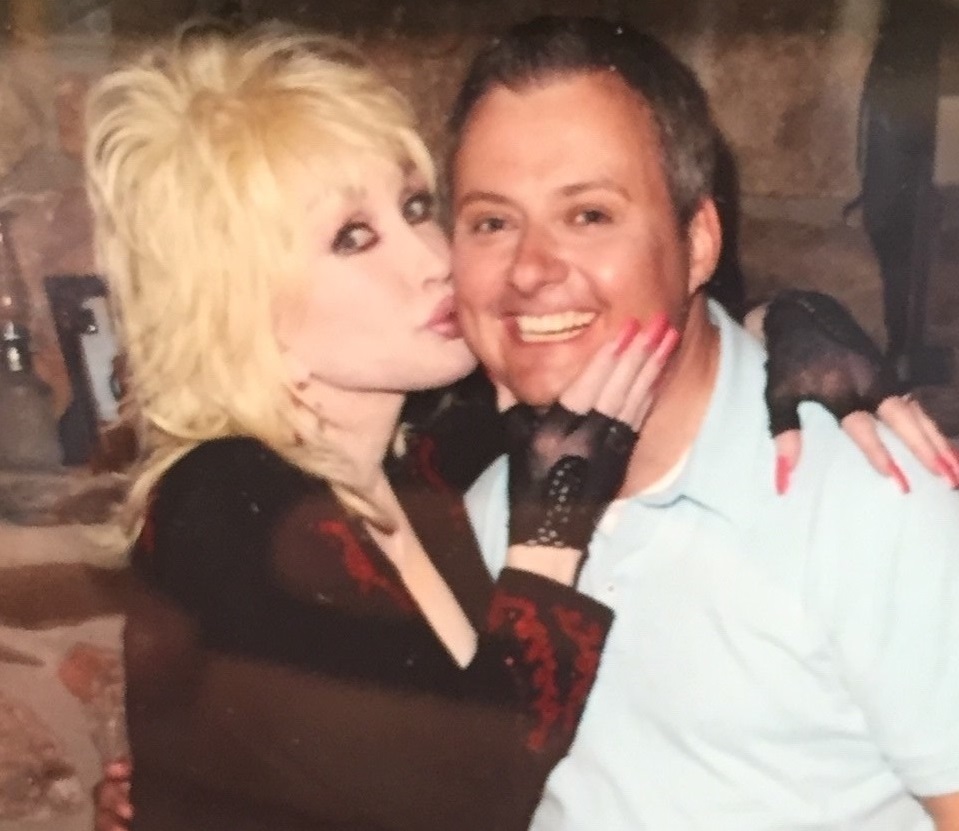 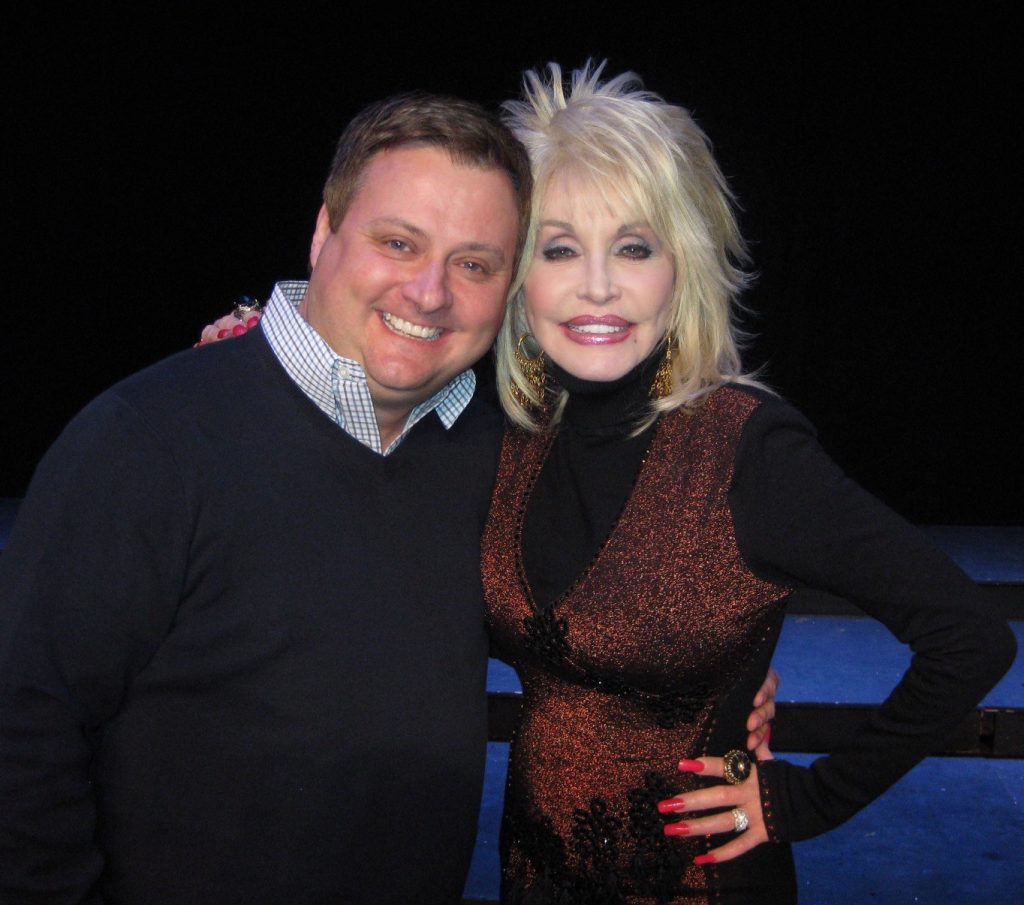 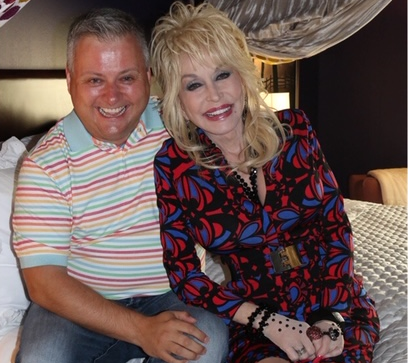 “I was a snaggle-toothed kid the first time I met and had my picture taken with her,” he recalled. “I remember looking at the photo later and realizing that she had her hand on my shoulder and being taken aback that she had touched me.”

The next year, he returned to Dollywood certain that The Queen of Country wouldn’t remember him. “I turned to the woman standing next to me and whispered, ‘she won’t remember me,’ then Dolly looked right at me and said, ‘yes, I do remember you.’”

Brashier attended fan days at Dollywood for the next 10 years and has never missed a Dolly appearance at the park. He’s traveled to concerts from Los Angeles to London, numerous New York talk show appearances, and the premier of 9 to 5: The Musical. He’s met several members of Dolly’s family and she has met his. “After meeting her, my family better understands why I admire her so much. One of them said it was like meeting the real Santa Claus.” 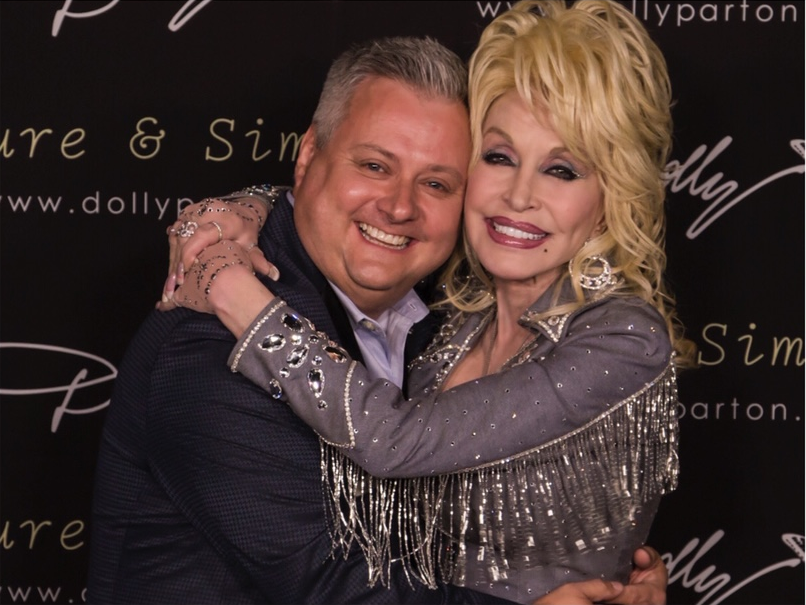 In recent years, Brashier has been an ardent supporter of the Dollywood Foundation, raising funds for Dolly’s Imagination Library and convincing his employers to back it, as well. That support garnered invitations to several special events and fundraisers, one of which led to that magical evening at Dolly’s home.

“We attended an auction where several of us bid on an evening with Dolly at her home,” Brashier said. “She cooked for us, sang for us and took us on a tour of her property. I remember driving home down I-40 thinking about the whole experience and saying, ‘My life is complete, I can die now.’”