Ward’s Grill in Saluda Takes us Back to Simpler Times

Ward’s Grill in Saluda, North Carolina will make you feel as if you have stepped back in time. We took a trip to the Saluda mountains where there was something in the air that filled our souls with nostalgia.

Saluda, North Carolina is where the foothills end and the Blue Ridge Mountains begin. This is where we found Ward’s Grill. 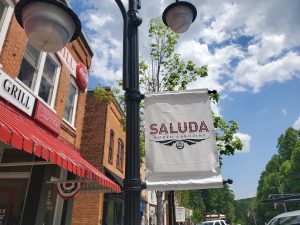 As soon are you enter the room, you will feel a sense of community. This diner will take you back to 1960 where it all began. Ward’s Grill became an addition to the historic General Store and quickly became a gathering spot for locals and tourists in downtown Saluda.

Sadly, in 2020, the iconic grill had to close their doors due to the pandemic, but this week, new owners Josh and Taylor Holmes who teamed up with the original owners reopened Ward’s . They are bringing the grill back to life where they plan to keep the long standing history, nostalgia and community alive.

So, if you are craving a burger or hot dog, stop by for lunch. If you want to get your day started off right, Ward’s offers your breakfast classics and don’t forget the milkshakes. They will not disappoint.

If you are longing for simpler times like we all are – step back in time, head to Saluda and give Ward’s Grill a try.