Sandy Hanebrink has been an advocate for the disability community for almost as long as she’s been using a wheelchair. On Sept. 22, the Mauldin native now living in Anderson, will become the first person in South Carolina to receive a medical exoskeleton from SuitX, enabling her to stand and walk on her own for the first time in 34 years.

“Because of my role with Touch the Future, as an occupational therapist and as a person with a disability, I’m always looking at different technologies,” said Hanebrink, 56. “That’s the world I work in, helping people find the right technology for themselves.” 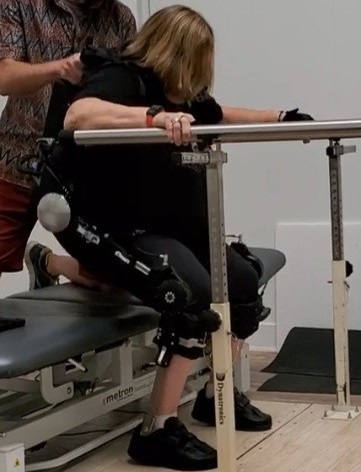 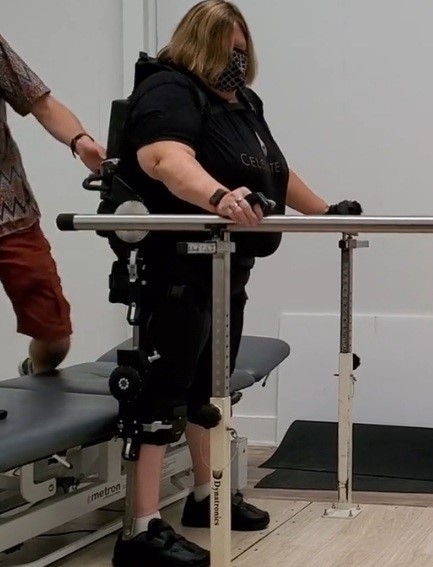 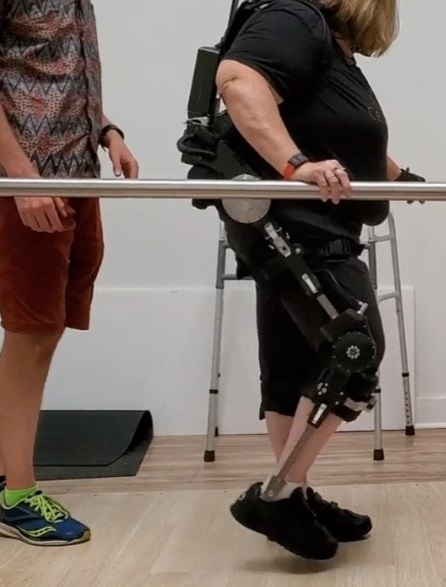 From C-brace leg orthosis to first generation exoskeletons, Hanebrink has tried most every assistive technology device of the past several years. While most of them were developed for use in clinical settings, the leaner, more user-friendly PhoeniX device by SuitX has received FDA approval and hopefully will soon have a Medicare code, making it available and more affordable for home use.

The PhoeniX suit features a backpack that acts as the device’s brain and robotic actuators at the hip and knees. The modular device is controlled by a Bluetooth switch and an app, and has a quick release that allows the backpack to be easily removed and stored in the overhead bin on an airplane, for example.

“I’ve been on this search and trying different things for over eight years now,” Hanebrink said. “Through a lot of advocacy work, a lot of research and lot of other efforts, the PhoeniX should have a Medicare code soon, which means that insurance will cover a portion of the cost.”

The price tag on a PhoeniX Medical Exoskeleton by SuitX is approximately $65,000. Knowing that new, promising technology was on the horizon, Hanebrink began saving for the life-changing device eight years ago. She also applied for grants and has done some personal fundraising, but she needs to raise $18,000 more.

While the Executive Director of Touch the Future Inc. – a nonprofit organization that provides assistive technology products, programs and training – is comfortable fundraising for the needs of other disabled individuals, it has been hard to ask for herself.

“I’m cool with who I am and proud to be a disabled advocate, disabled occupational therapist and Paralympian,” Hanebrink said. “I’m all about helping the other person and being the one trying to change systems and change the community. To go out there and ask for help myself is really hard. It’s been a reality check that puts me in the mindset of the people I serve, and it takes me back to when this all began.” 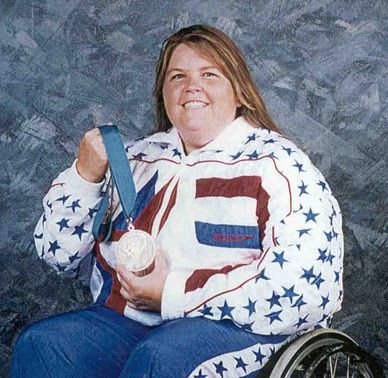 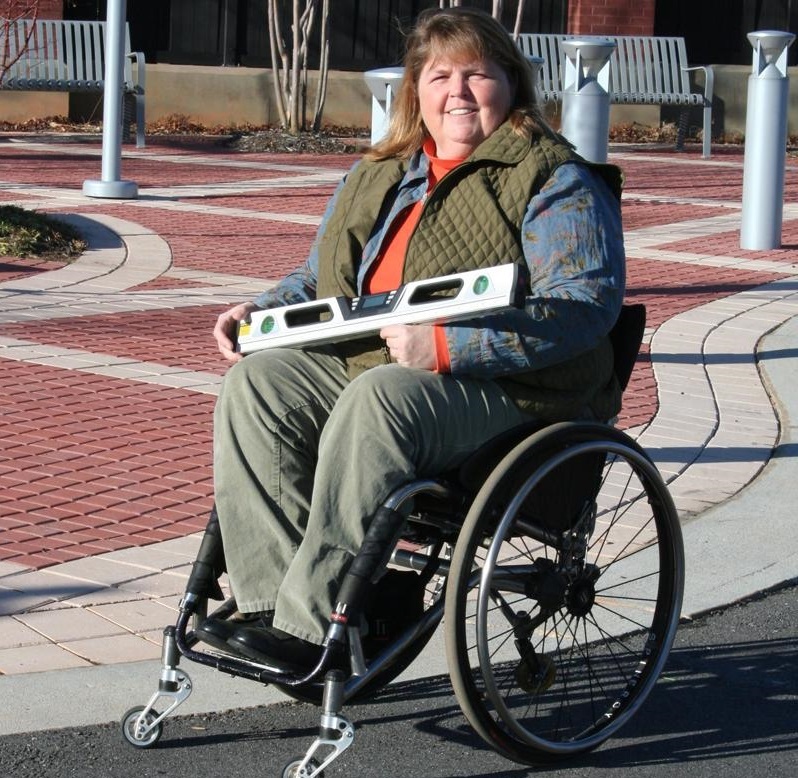 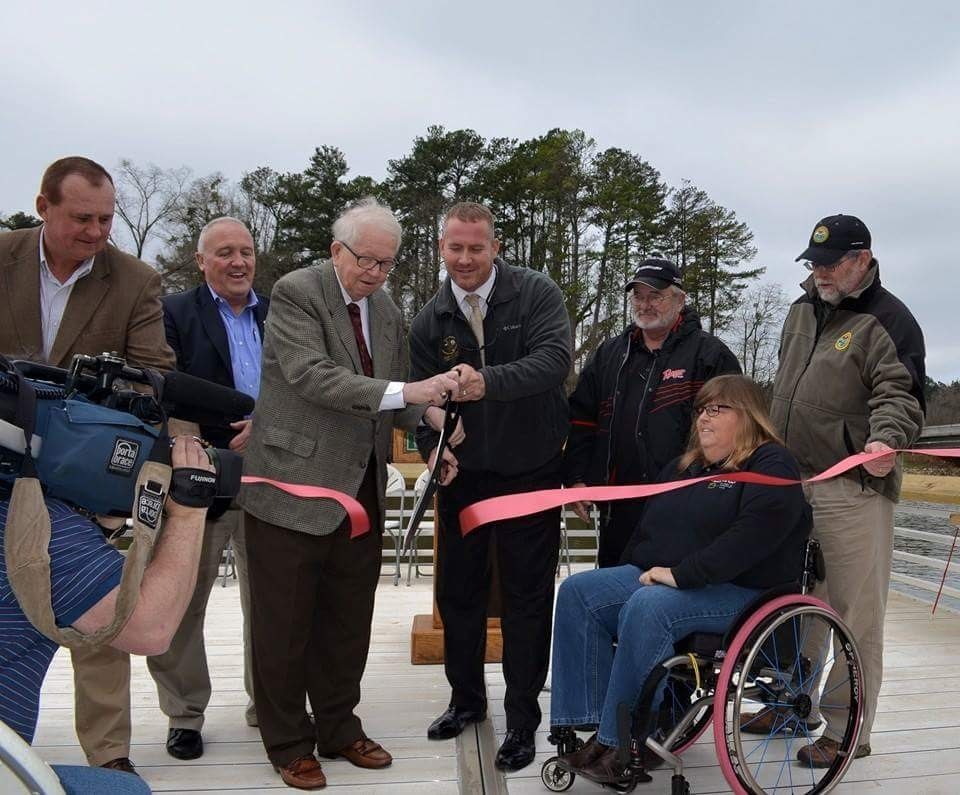 For Hanebrink, it all began one rainy afternoon in Florida when her car was rear-ended while she was running an errand for the University of Florida women’s volleyball team, where she was a scholarship athlete. Injuries sustained in the accident required two shoulder surgeries. During a third surgery to repair her jaw, she had an allergic reaction to medication that caused paralysis.

Hanebrink’s advocacy for the disabled began almost immediately as she encountered barriers to education, employment, transportation and other services for herself and her late brother, Tommy, who became paralyzed the same year due to brain and spinal tumors. 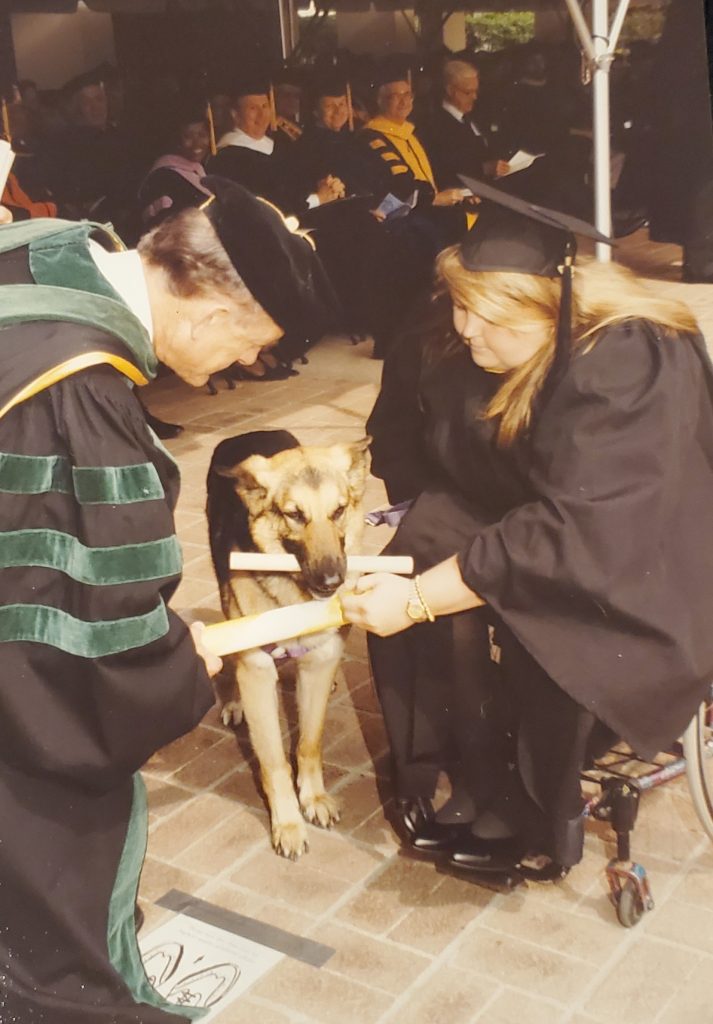 It took Hanebrink eight years to get accepted into an Occupational Therapy program, but in 1997 she became the first person in a wheelchair to graduate from the Medical University of South Carolina. Her service dog, Jazz, also received a diploma.

“My wheelchair hasn’t stopped me from seeing the world or enjoying a career. It’s actually provided some opportunities, like Paralympics,” said Hanebrink, who has won gold, silver and bronze medals in wheelchair basketball, tennis, swimming, shot put, discus and javelin.

But the opportunity to help those who are disabled achieve a life of independence has been Hanebrink’s true reward.

“Assistive technology has been a game changer for employment, education and health and wellness,” she said. “Technology for people with disabilities is the whole world. For some people it’s communication, for others it’s physical fitness, and for some it’s just life itself. That’s what this exoskeleton device changes. It moves it from being a therapeutic intervention to something that is purely functional that improves quality of life and independence.”

In addition to allowing disabled persons to stand up and walk about, the exoskeleton device will reduce the number of medications those with paralysis take to improve circulation and bowel and bladder function, and help with cardiovascular, bone density and autoimmune disorders.

“It’s hard to explain all the health benefits that will come from this,” Hanebrink said. “It’s more than just being paralyzed and wanting to walk.”

To assist with Sandy Hanebrink’s Walk2Walk Fund, you can mail a check to Touch the Future Inc., 2123 N. Highway 81, Anderson SC 29621, go HERE to donate online or scan the QR code below. 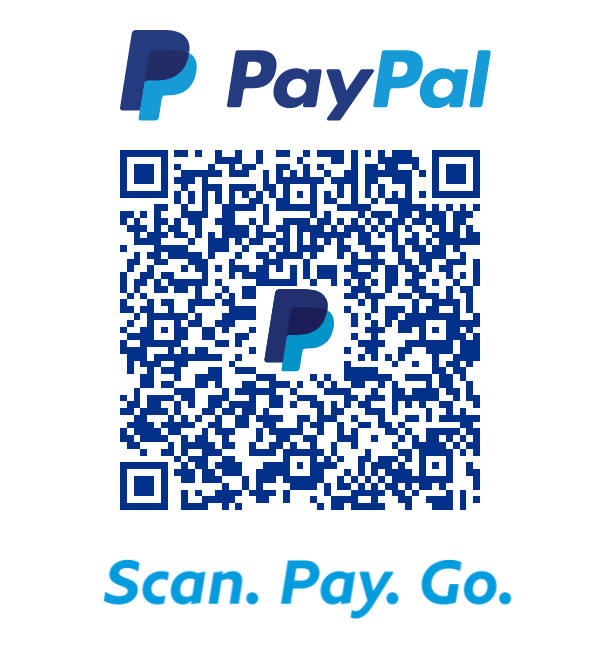