The title of Kathryn Smith’s latest book, Baptists & Bootleggers, was inspired by her father, Bruce Yandle, a well-known economist and Dean Emeritus of Clemson University’s College of Business and Behavioral Science.

His book, Bootleggers & Baptists, explores his theory of economic regulation. Her book is a Prohibition expedition through the South . . . with cocktail recipes.

A fun and informative look at the era of the 18th Amendment that banned the manufacture, transportation and sale of intoxicating liquors, Baptists & Bootleggers is a first-person account of Smith’s travels researching the history of Southern rumrunners and moonshiners and the temperance movement crusaders that fought them.

The Anderson author even traveled to Miami Beach where she secured a boat with driver to take her by the house where American gangster Al Capone lived and died. And she visited the Kentucky birthplace of Carry Nation, aka Hatchet Granny, a member of the temperance movement who is famous for attacking alcohol-serving establishments with a hatchet.

“My other books have been about Franklin Roosevelt and other people who lived the high point of their lives in the 20s, 30s and 40s. It’s my favorite era,” Smith said. 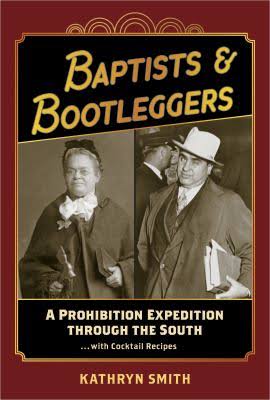 Readers of Baptists & Bootleggers will not only learn the history of Prohibition, they also will find short expeditions they can take to speakeasys and distilleries, and cemeteries where bootleggers are buried. A nearby excursion referenced in the book is a stop at Palmetto Distillery in Anderson, South Carolina’s first legal moonshine distillery.

“I learned a lot from Trey Boggs, one of the owners here,” said Smith, during an interview at the West Benson Street distillery. “Anyone who talks with him will learn an awful lot about moonshining.”

For those who prefer to be armchair travelers, Baptists & Bootleggers is packed with cocktail recipes you can make at home.

“Some of them are old ones from that era and a lot of them were given to me by modern bartenders,” Smith said. “Then, there are mocktails because, after all, there are Baptists who might read this book.”

Acknowledging that the wrangle between religion and alcohol still exists, Smith reminds us that the 18th Amendment banning alcohol was the only amendment that limited freedom in the United States.

“All the others expanded it, and it’s the only Amendment that has ever been repealed so what does that tell you,” Smith said. “We like to make our own choices and our own mistakes.”

You can meet Kathryn Smith at a book signing event at Palmetto Distillery, 200 West Benson Street in Anderson, on Friday, November 5, from 4 p.m. until 7 p.m.

You also can follow Smith’s daily blog at bootleggers.substack.com.