With the cancellation of traditional fundraising events due to COVID-19, United Way of Anderson County will stage the greater Anderson area’s first-ever virtual singing competition and fundraiser.

Anderson Sings presented by The Peoples Bank will celebrate the musical talent from Anderson County while raising funds for the United Way of Anderson County. 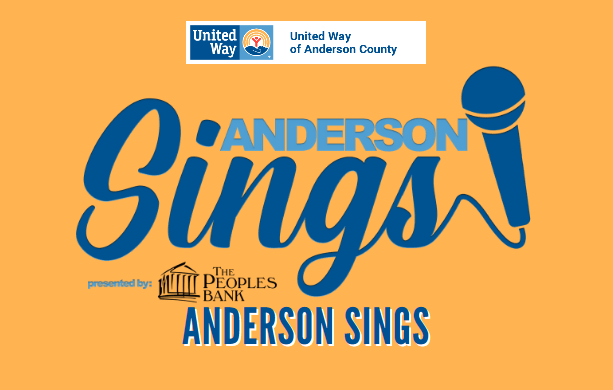 The virtual singing competition is for vocalists and bands who are local to or affiliated with Anderson County. The Grand Prize winner will receive $1,000, an appearance at Celebrate Anderson 2021, and the chance to record a track at the legendary Capricorn Music Studios in Macon, GA where the likes of the Allman Brothers, Lynyrd Skynyrd, Otis Redding and many others have recorded hits.

“Throughout history, music has helped to unify and heal people. We hope Anderson Sings will inspire some fun and friendly competition, all while boosting spirits and raising funds for our community,” said Carol Burdette, CEO of United Way of Anderson County. “At a time when COVID-19 has seemingly taken away so much, we are thrilled to bring a virtual event to Anderson County that we know will not only lift spirits during the course of the competition, but will have an ongoing impact in our community.”

Anderson Sings will be organized as a single elimination bracketed tournament. The winner of each round is based on the number of votes received in the United Way Anderson Sings online fundraiser. Each $1 contributed counts as one vote.

Musicians must register for the tournament by 10 a.m. on August 27, with the bracket and first round match-up dates announced soon after. Entrants will be asked to submit a YouTube link to a video that can be used for the first round of the competition. Original music and covers will be accepted.

Anderson Sings entrants must be 16 years old by December 31, 2020. The solo artist or at least one member of a band or musical group must be local to or affiliated with Anderson County.

Artists can go here to register.