The Wait is Finally Over – Unity Park is Open to All

This land came from a troubled past, but the future holds hope in unity. The land sat between the predominantly whites-only downtown and the Southernside neighborhood.  Meadowbrook Park in downtown Greenville was created, but for whites only. Then came Mayberry Park for the black community. Fast forward many years and now we have Unity Park created for ALL. 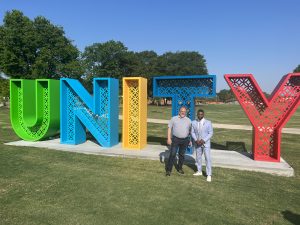 Three pedestrian bridges span the Reedy River, which flows through the middle of the park. The Swamp Rabbit Trail, a popular 23-mile walking/biking trail, runs along both sides of the river and the park contains five additional looped walking trails totaling 2.5 miles. For those who prefer to pedal, there are seven bike rack stations conveniently located throughout the park.