The Pelzer Light People are back in 2021

Editor’s Note: The Pelzer Light People are back in 2021! See them on Lebby Street in front of Historic Pelzer Gym on Fridays, Saturdays and Sundays, November 26 through December 19, from 7 p.m. until 9 p.m. Hours on Friday, December 3, are 8:30 p.m. until 10 p.m. Weather permitting for all dates. For updates, follow @lightpeopleofpelzer on Facebook. The following article was posted in December 2020 to mark the return of The Pelzer Light People after a six-year hiatus.

Louise Watson would be proud. Proud that her legacy of light is once again shining in her hometown of Pelzer.

For 24 years at Christmastime, thousands of cars, vans, buses and even limousines streamed down Adger Street through the mill village where Mrs. Watson lived to behold people dressed in suits of colorful lights. The Pelzer Light People, as they came to be known, waved, danced and gave out candy wanting nothing in return but to spread joy and happiness during the holidays.

The lights were unplugged in 2014 as the aging matriarch became unable to participate and the family experienced the loss of Mrs. Watson’s son, then her daughter. In 2018, Mrs. Watson died at the age of 92. But in 2020, amid a worldwide pandemic that has created a veil of emotional darkness, the Watson family decided there was no better time to bring back the tradition of The Pelzer Light People.

“Every year, we thought about bringing it back, then something would happen – another death in the family,” said Michelle Watson, who is married to Louise Watson’s grandson. “We decided this was the perfect year to try to give a little light.”

The reprise of The Pelzer Light People is sticking as close to the original as possible, although they’ve moved from the mill village to the Historic Pelzer Gym on Lebby Street to better accommodate a line of vehicles that often stretches past the traffic light in West Pelzer. The human light display even features one of the original suits that Mrs. Watson crafted by fastening strands of lights to clothing with safety pins.

“There were more than 1,000 lights on the original suit but when Granny put it on, it was too heavy,” Michelle Watson said. Perfecting the outfits over time, Mrs. Watson devoted a room in her home to housing the suits. At performance time, Pelzer neighbors, friends and even passersby would don a suit, step outside and plug in with extension cords. 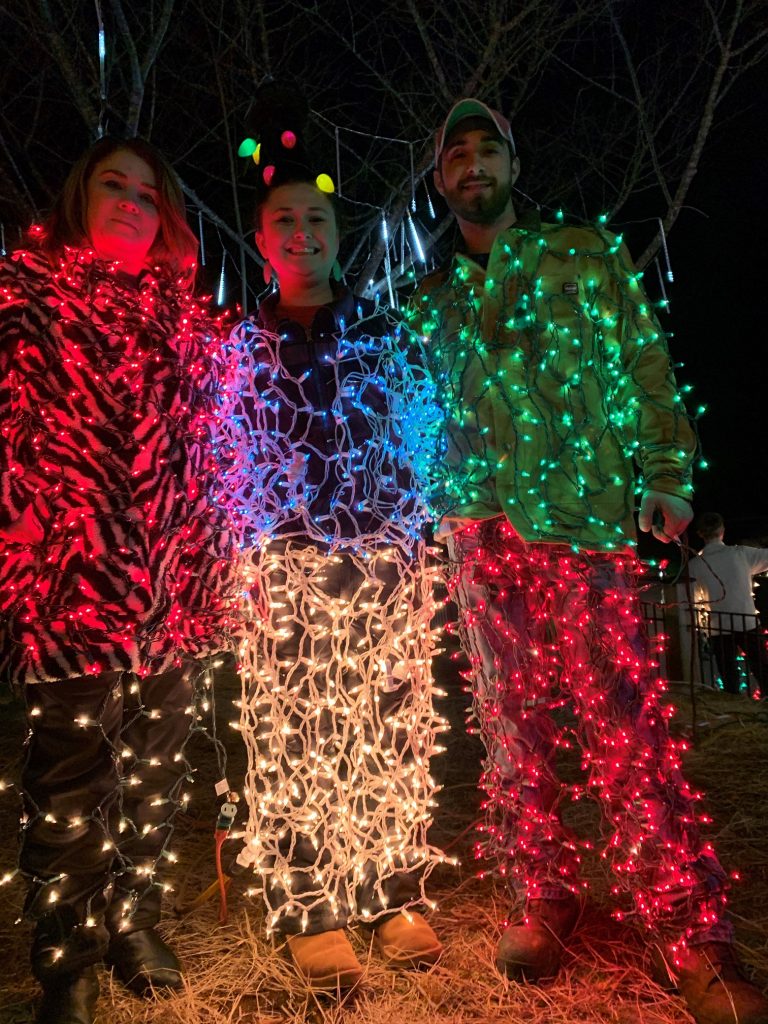 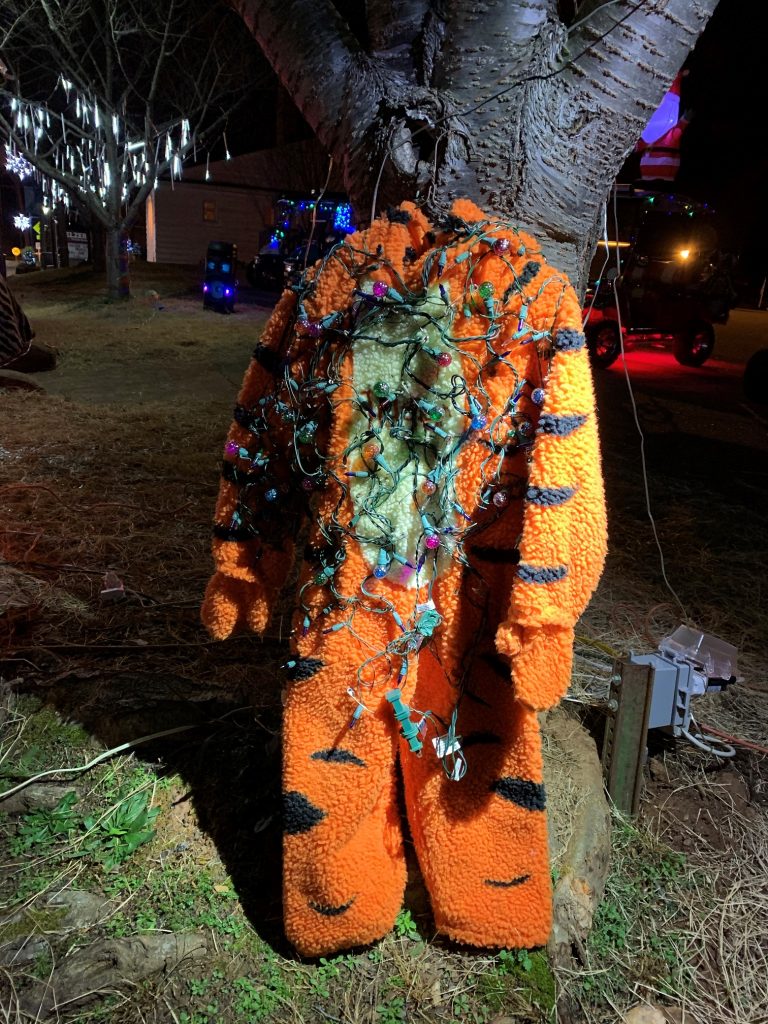 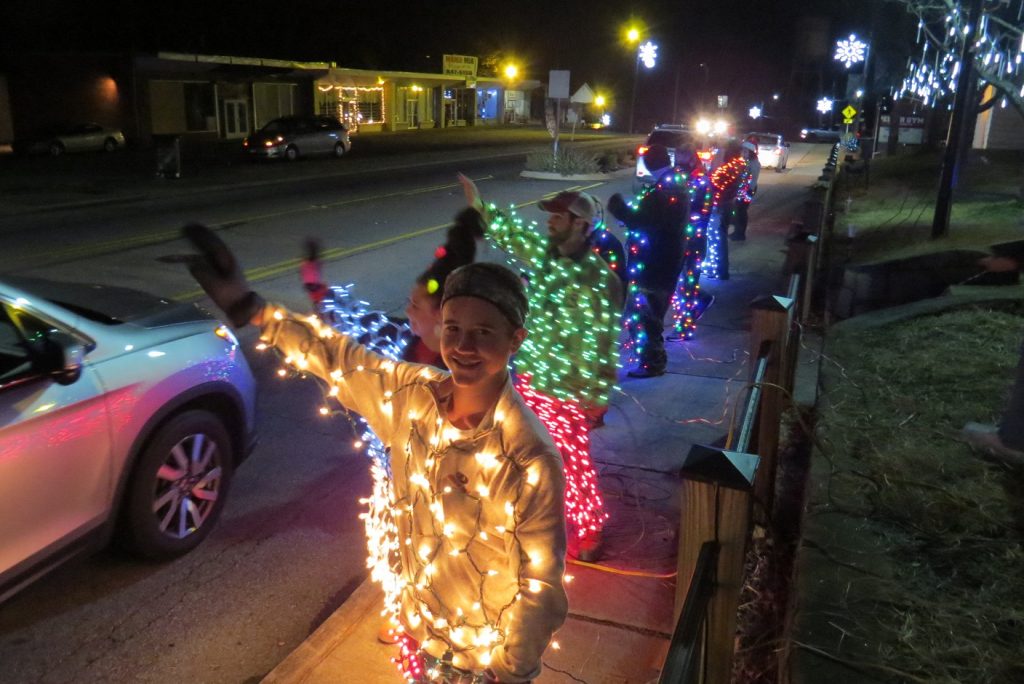 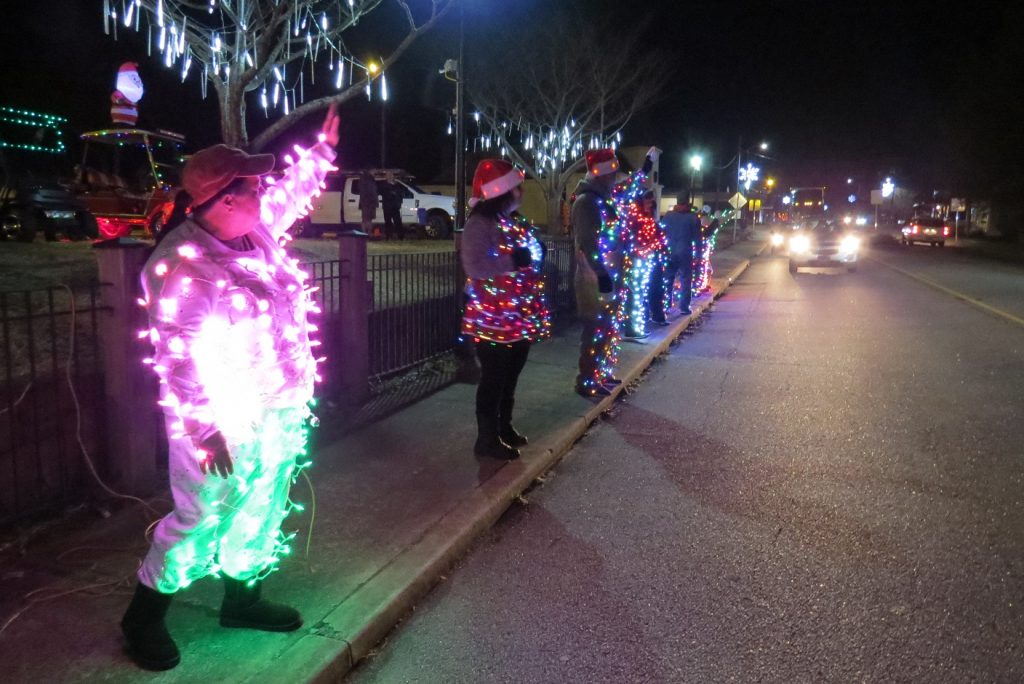 Louise Watson’s Pelzer Light People shone a national spotlight on the small Anderson County town, grabbing the attention of news media across the country and at least one celebrity, Michelle Watson said.

“One night, someone ran into Granny’s house and said Paula Deen was there,” Watson said. “Granny told her to come on in and grab a suit, and when she left, Granny said, ‘now, who is Paula Deen?’”

For the Watsons, Knights, Tuttles and Smiths, suiting up four nights a week to spread a little joy at the holidays is a tribute to Louise Watson’s desire to give back to her community in a creative and meaningful way. In addition to their public appearances on Lebby Street, The Light People this year will take the show on the road, visiting Southern Oaks Rehabilitation and Healthcare in Piedmont and NHC Healthcare in Anderson. The group also took first place in the recent Pelzer-West Pelzer Christmas Parade.

Pelzer Mayor Will Ragland said the town is delighted to see the tradition reignited.

“The Light People represent what’s best in Pelzer – neighbors working together to give others joy,” Ragland said. “I just may ‘get lit’ myself!”

Added Watson, “Seeing the smiles, the joy and the excitement on people’s faces is what this is all about. So many people have told us how much they missed us.”

See The Pezler Light People in 2021 on Fridays, Saturdays and Sundays, November 26 through December 19, from 7 p.m. until 9 p.m. Hours on Friday, December 3, are 8:30 p.m. until 10 p.m. Weather permitting for all dates. For updates, follow @lightpeopleofpelzer on Facebook.