Diane Kilgore-Condon wasn’t trying to be a trailblazer, she simply needed a new spot for her studio.

Working full time as merchandising manager for Belk department store, Kilgore-Condon had an art studio in downtown Greenville where she painted part time. When her landlord decided on another use for the space, she began searching for a new place to paint.

“I sat in a meeting that the city held to talk about how they needed a space for artists,” Kilgore-Condon recalled. “I was there because I was about to lose my space and I wanted to see what kind of art space was going to be available.” But she knew the ideas tossed around that day wouldn’t fly with working artists. “You can’t constantly expose artists to other responsibilities like showing tourists around,” she said. “The turnover would be constant.”

In 2001, the Village of West Greenville didn’t exist. Only a handful of retail and restaurants remained open along the west end of Pendleton Street, with empty storefronts and homes in decline dotting the landscape of the once thriving textile mill community. 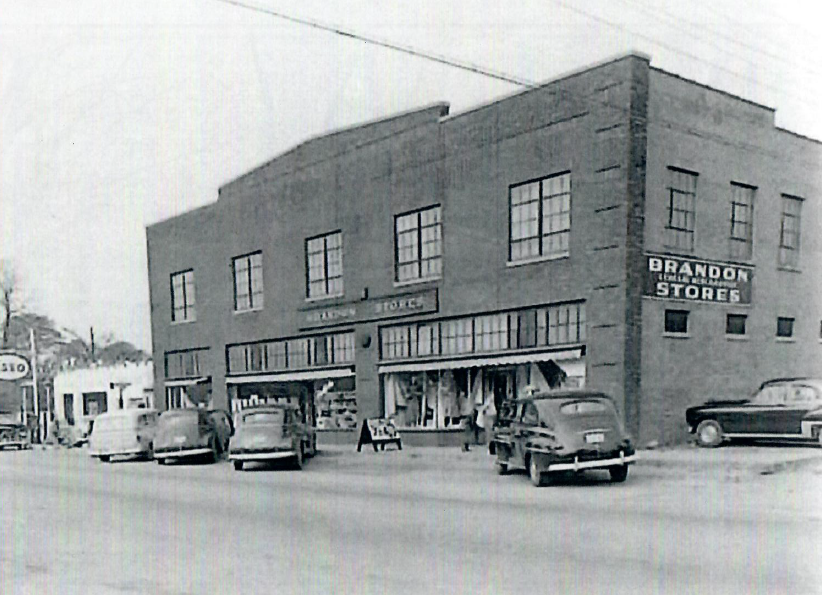 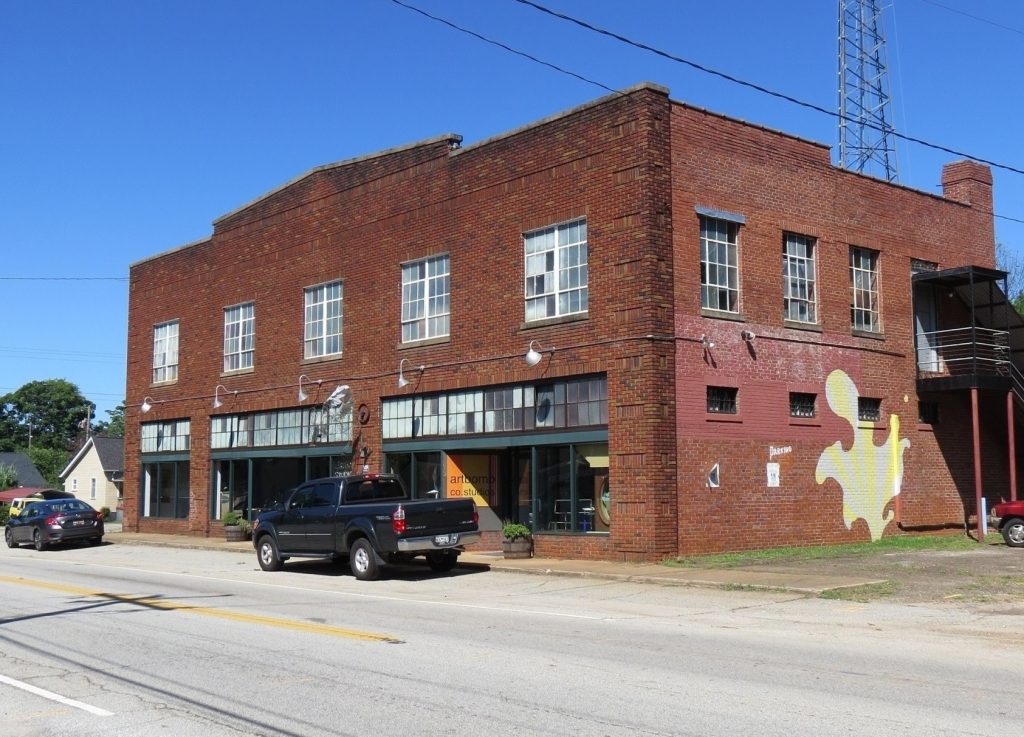 When Kilgore-Condon stepped inside the two-story brick building that originally housed the Brandon Mill Company store, she did so with an open mind.

“The place is pretty big, and I remember thinking that maybe I should ask a few artists to come along,” Kilgore-Condon recalls. At the end of the conversation about leasing the building, the owner said he’d be willing to sell it. “I said I would buy it, then I thought, ‘how am I going to do that?’”

Loans available to those making improvements in blighted communities and a visionary loan officer at BB&T gave Kilgore-Condon the funds to buy the building. Having left her job at Belk to become a full-time artist, Kilgore-Condon formed The Art Bomb Company, a nonprofit organization, and invited other artists to move their studios to 1320 Pendleton Street.

“I formed a nonprofit for a few reasons,” she explained. “Psychologically, it’s important that the people coming into a project of this size know that you’re not doing it for personally advantageous reasons. I keep rent incredibly low and it pays the expenses.” 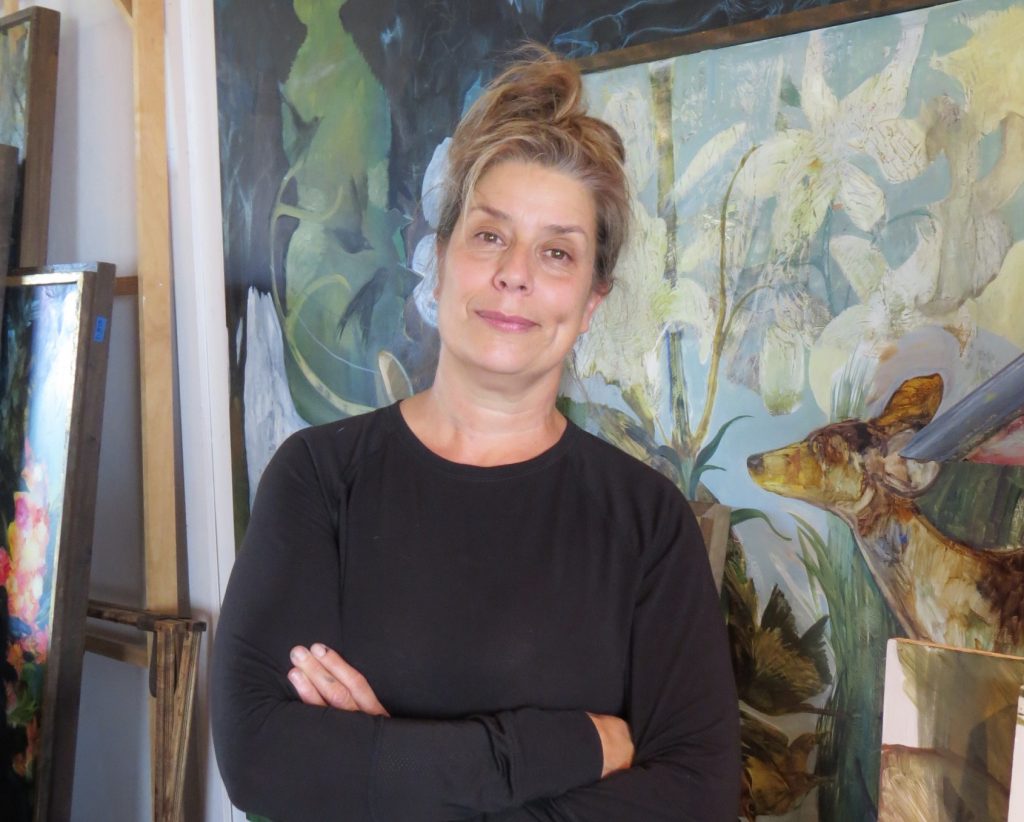 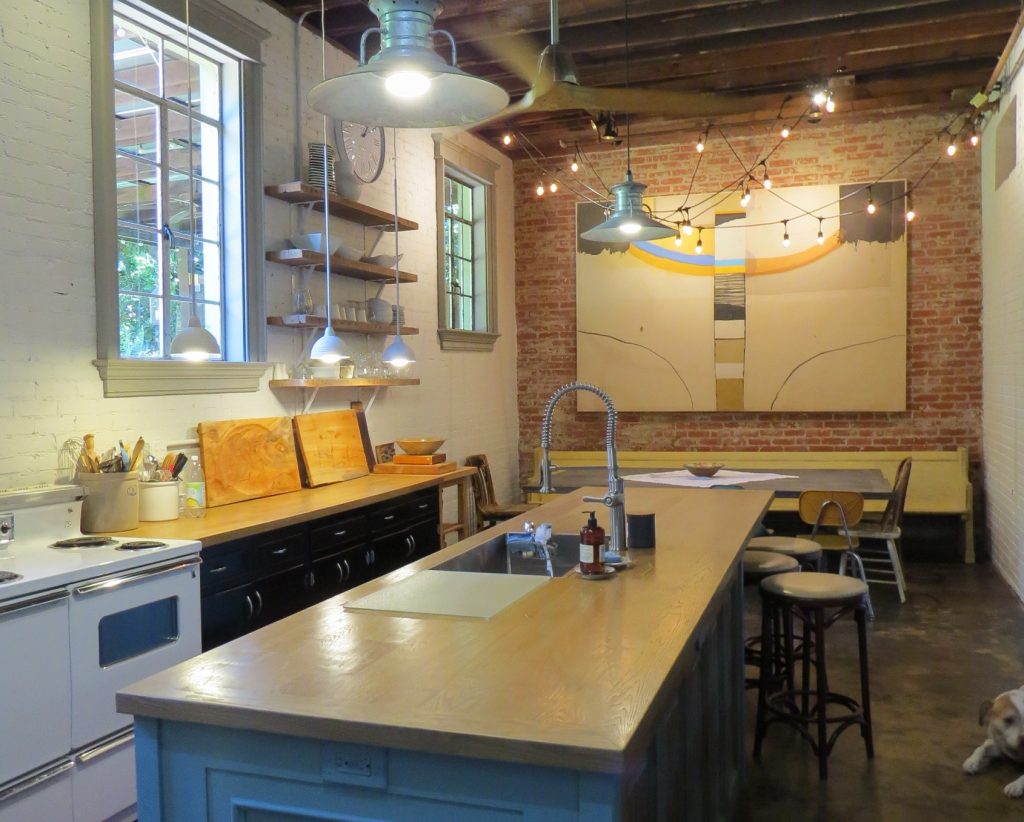 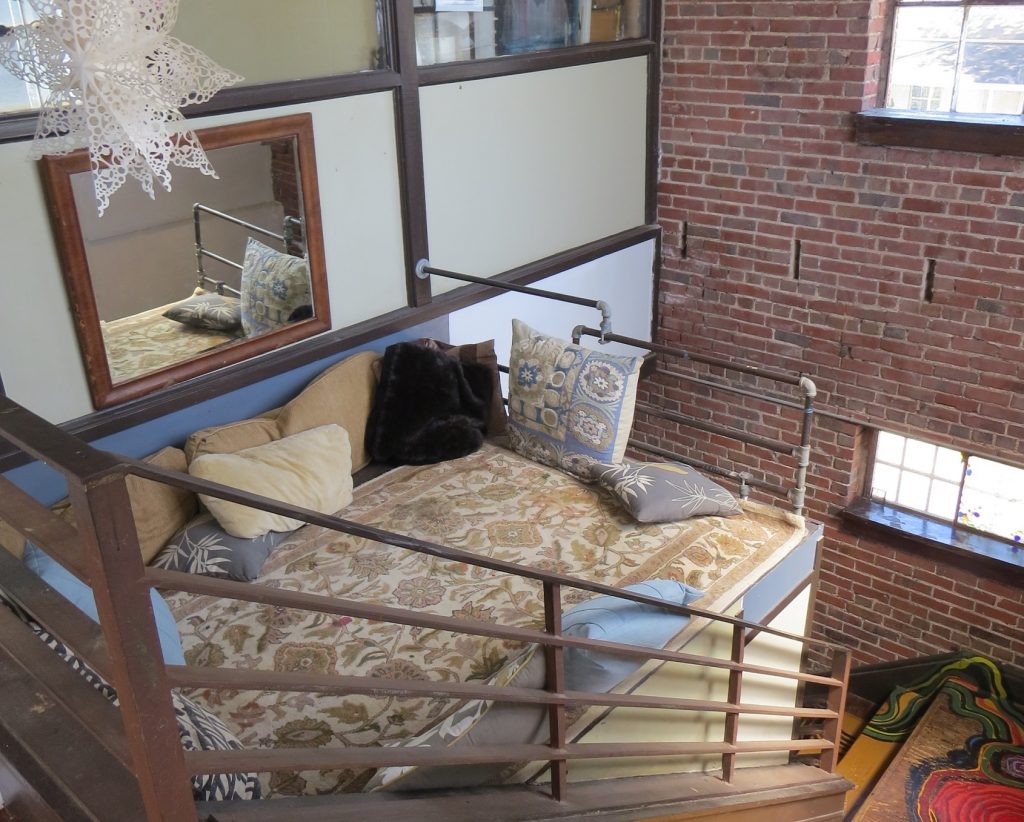 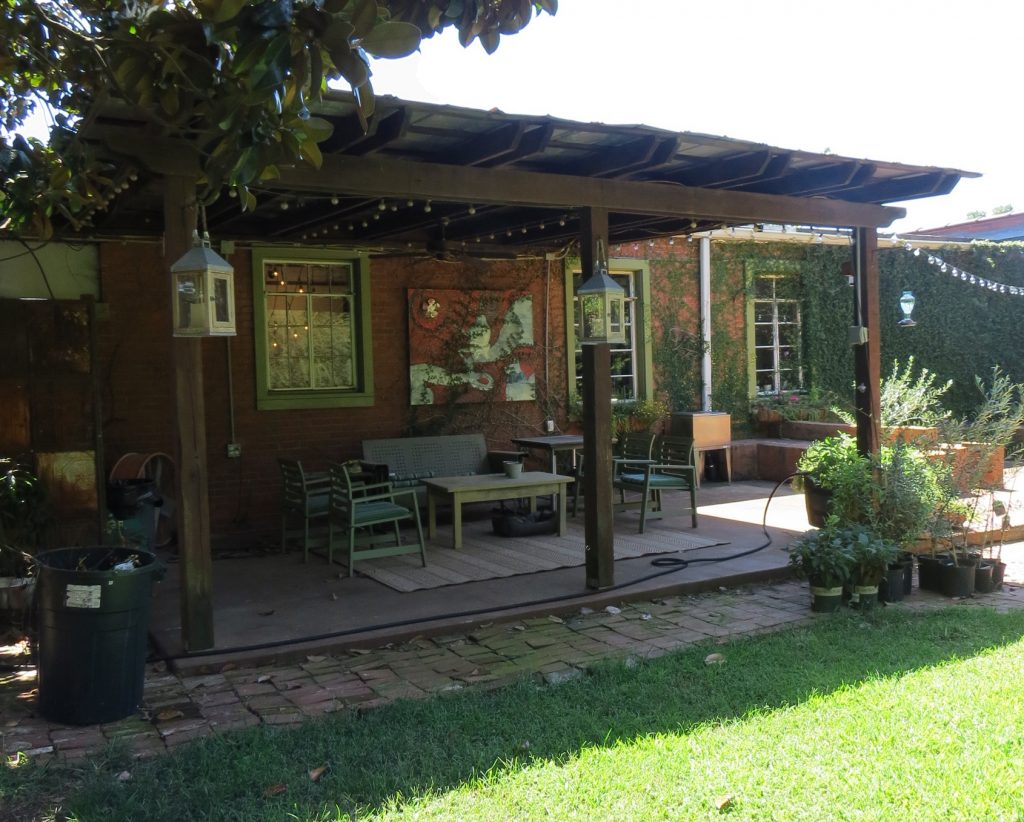 Art Bombers built the back deck. 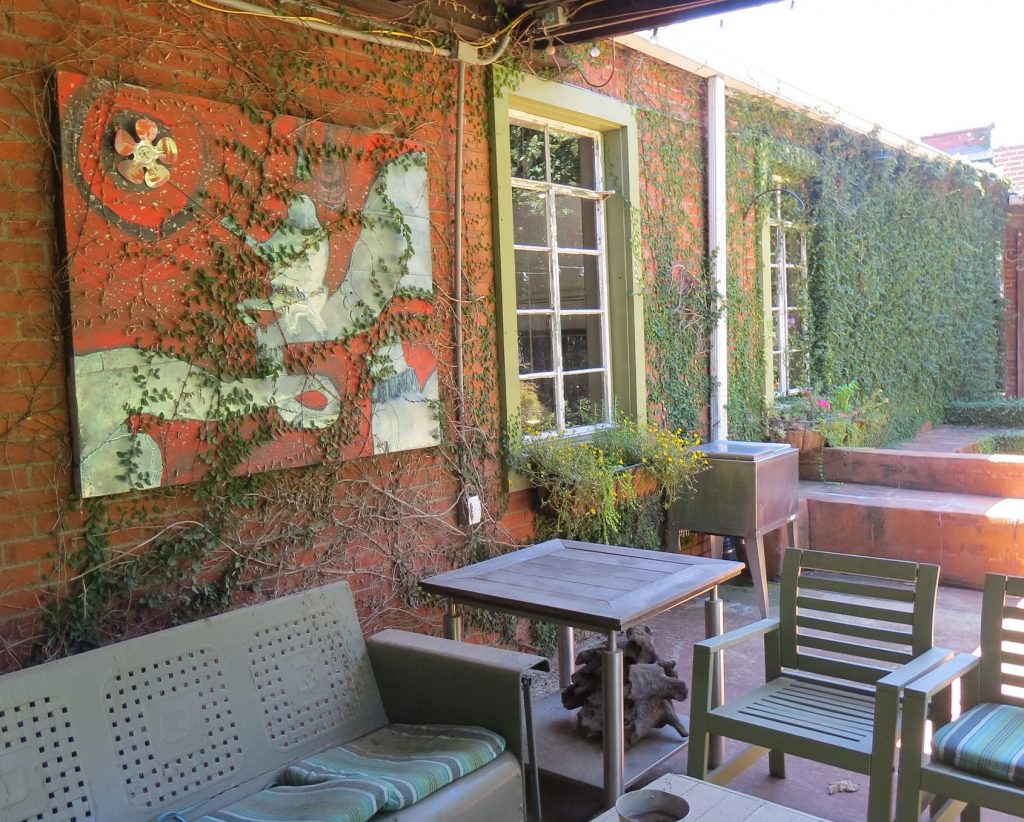 The Art Bomb’s back patio. 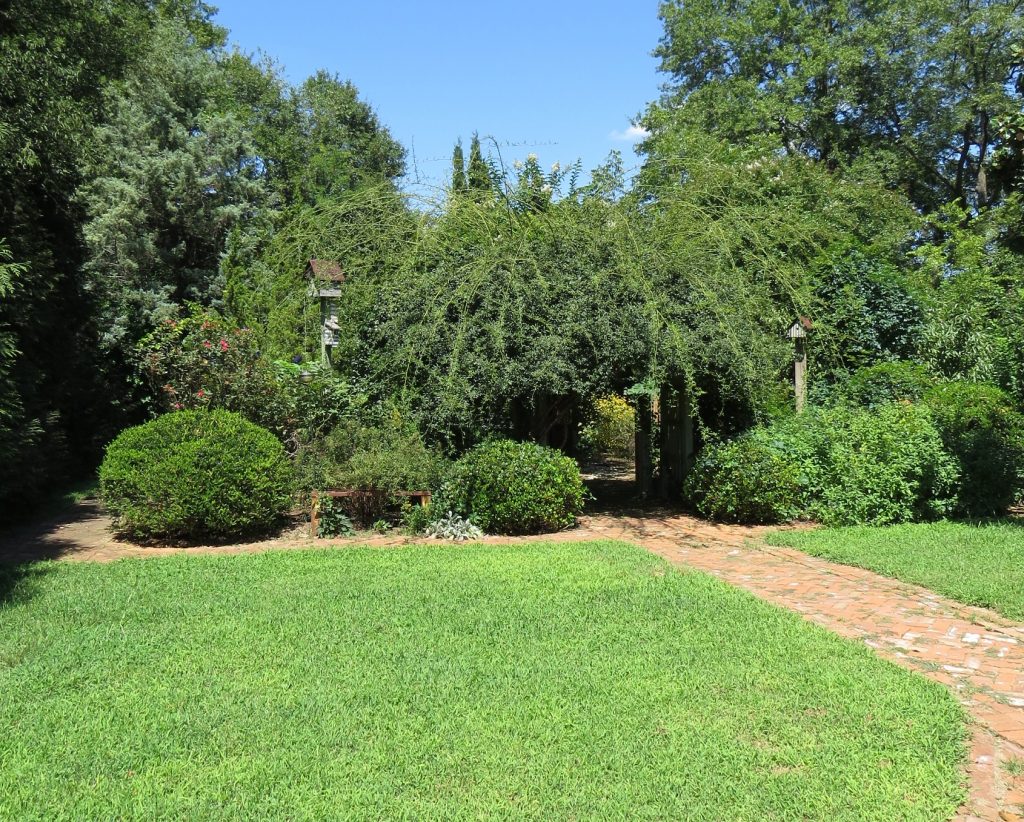 The artists also invest sweat equity into The Art Bomb, holding periodic workdays to make improvements or to clean when the studios will open to the public. Projects have included tarring the roof, building a new kitchen and converting the backyard into an English garden. A new kiln is on the fall project list.

As art galleries in the Upstate have come and gone, The Art Bomb has maintained its slate of 15 artists with very little turnover and a healthy waiting list.

“If we depended on public art sales to survive, we wouldn’t make it,” Kilgore-Condon says. “The work goes on the walls here for the public to enjoy during our shows and some of those pieces occasionally will find a home. But for the most part, our work goes to galleries around the country that individual artists have garnered relationships with on their own.” 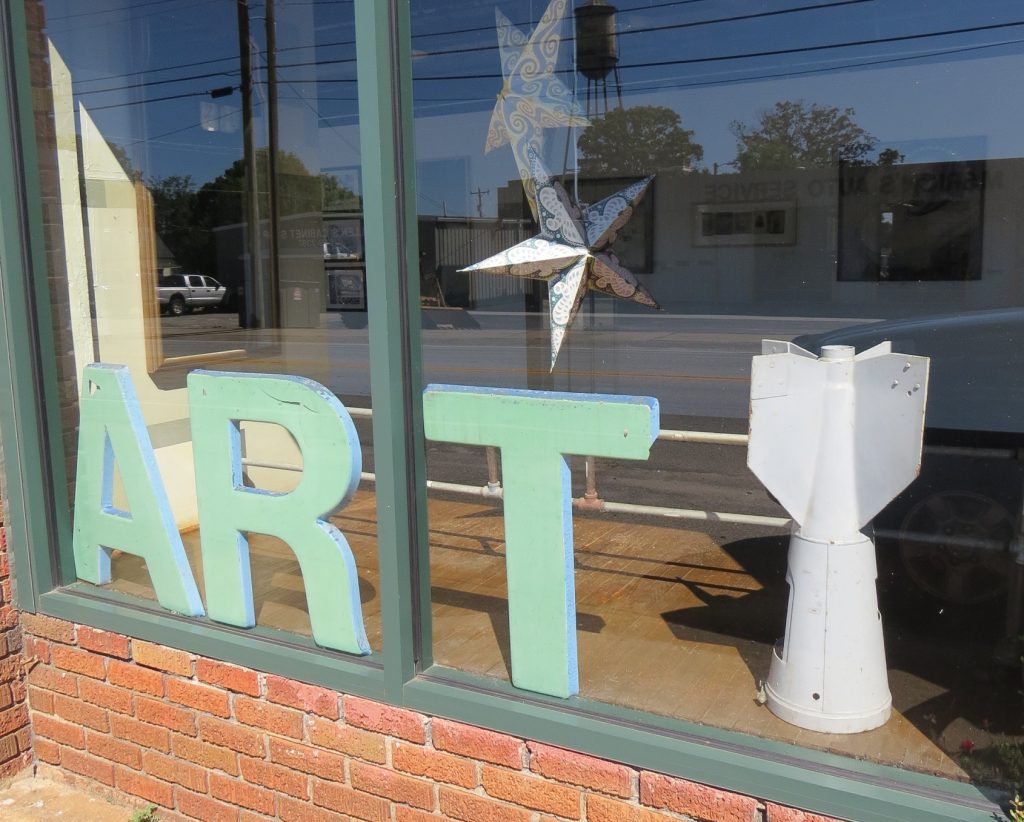 Katie Walker works in her studio. 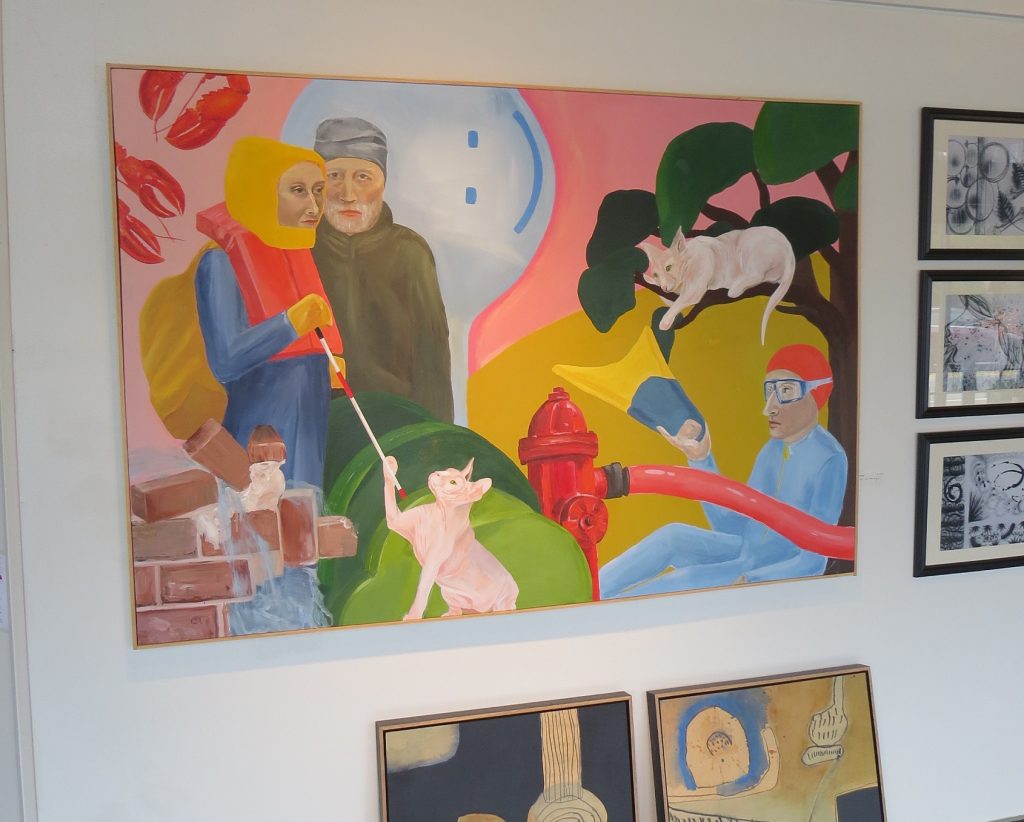 A work by Caroline Wright hangs in The Art Bomb lobby. 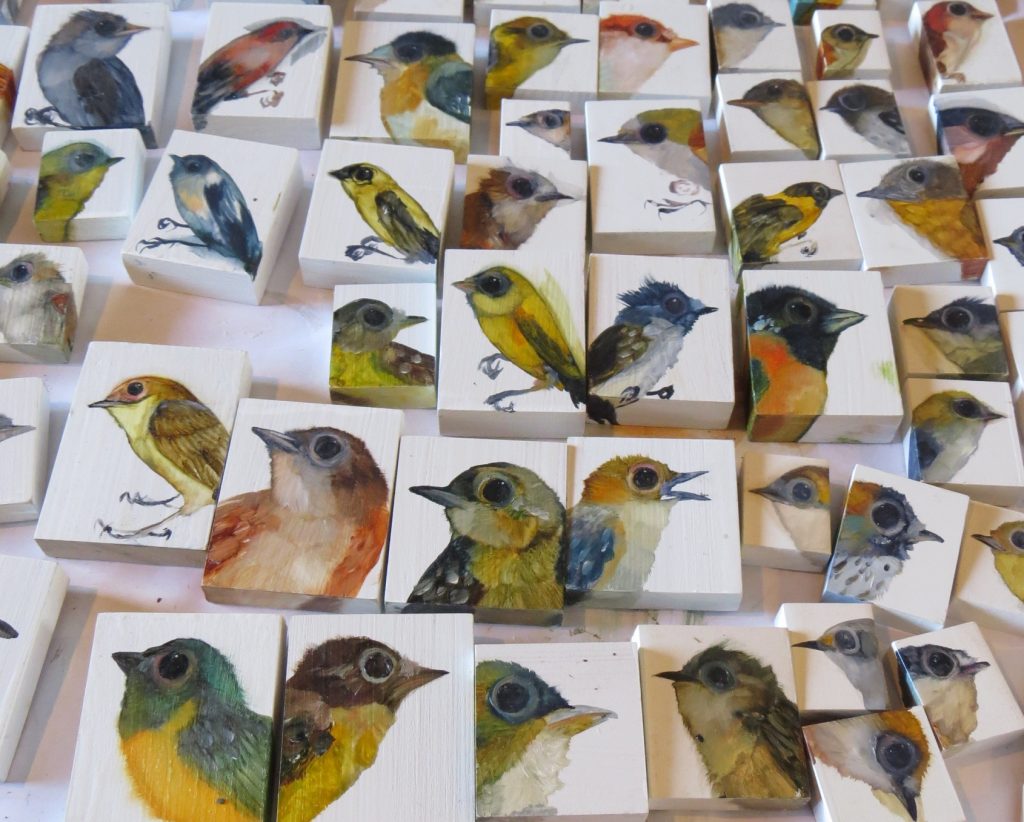 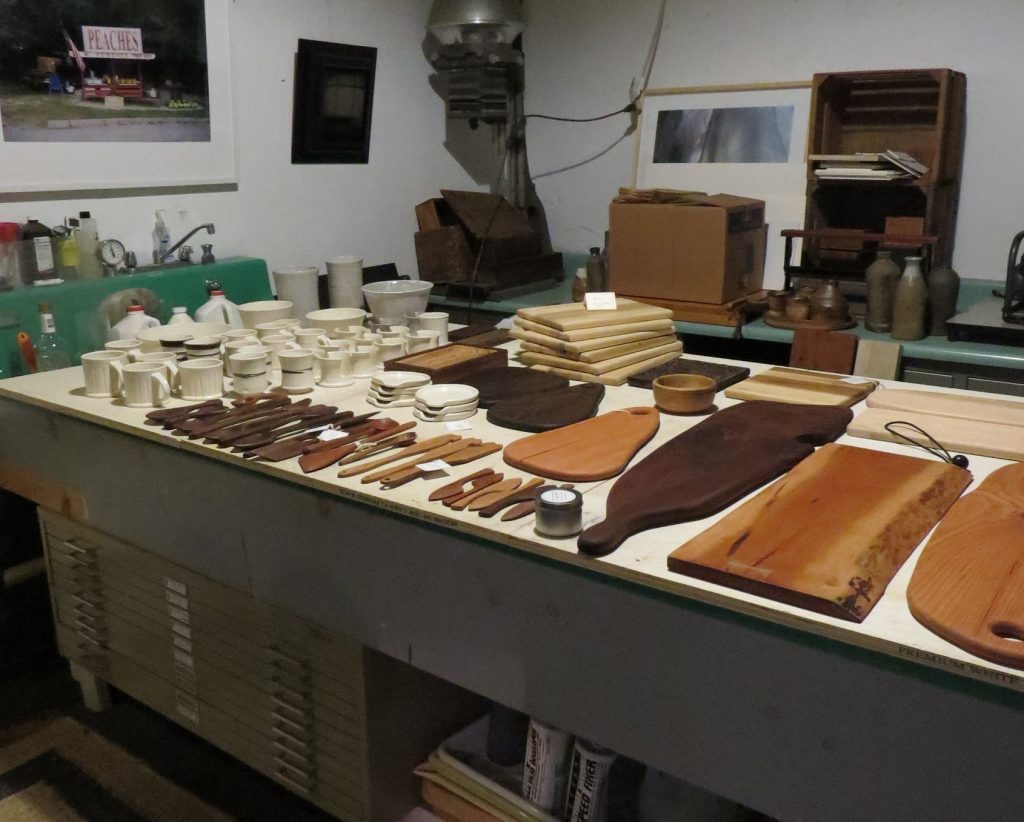 A look inside Blake Smith’s studio. 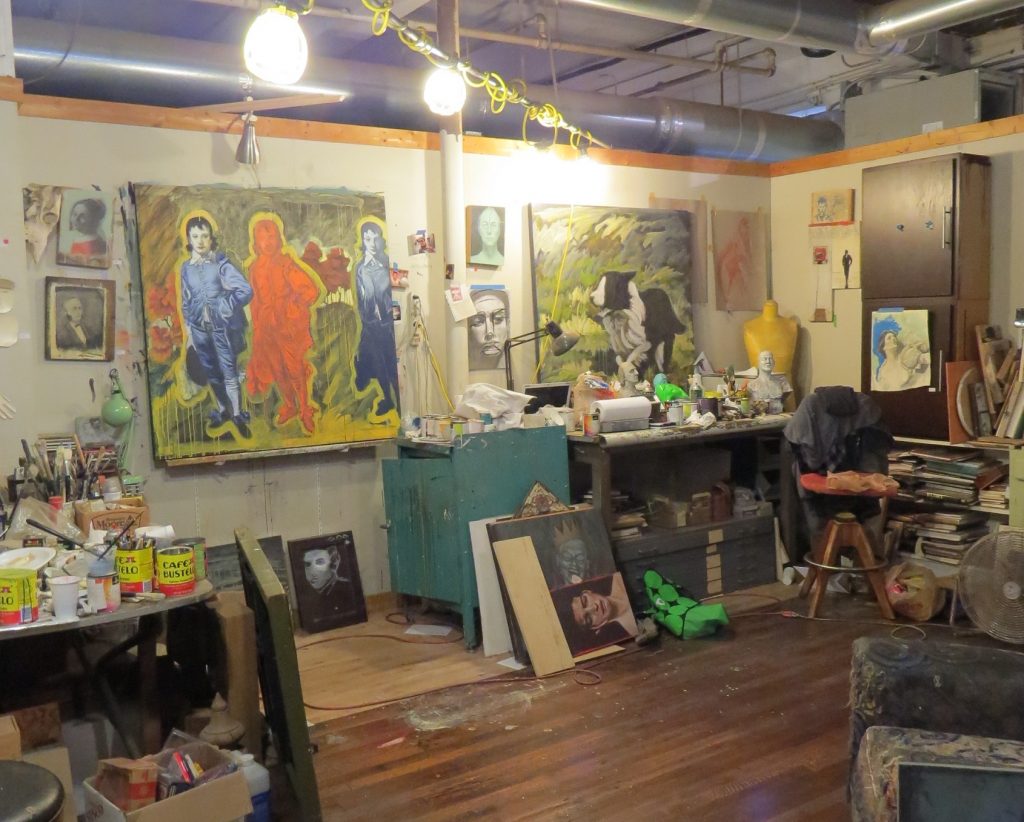 As a working studio, The Art Bomb is open to the public during shows and by appointment. Otherwise, it’s a sanctuary where artists enjoy privacy, autonomy and camaraderie.

“There are no restrictions on what we can create,” says 11-year Art Bomb member Tim Speaker. “That allows an artist to take a risk and gives them the ability to try something new and different.”

But it’s the non-commercial aspect of the studio that’s the secret sauce, according to Speaker. 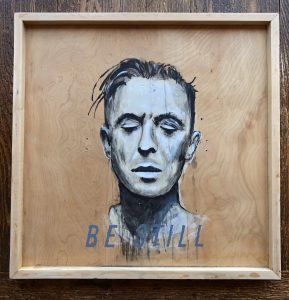 Be Still by Tim Speaker. 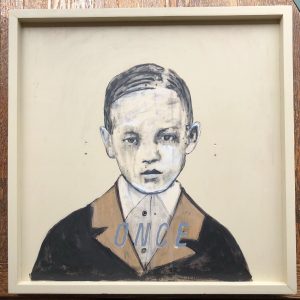 Once by Tim Speaker. 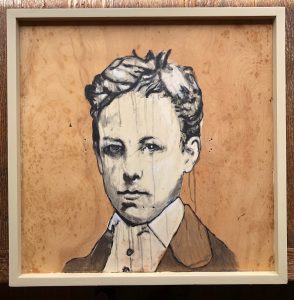 “Diane’s vision was to create a place that is purely about the work, a place that’s not commercially-driven and where ego levels are low,” Speaker said. “A place like this is incredibly rare.”

A genuine desire to see each other flourish is another part of The Art Bomb’s success, according to Jo Carol Mitchell-Rogers, a member for 15 years.

“We have a tribe-like mentality,” said Mitchell-Rogers, who is Associate Dean of the SC School for the Arts at Anderson University. “We’re all genuinely good friends that root for each other and are thrilled with each other’s success.”

For example, Art Bombers band together each year during Flat Out Under Pressure, a 24-hour juried competition sponsored by the Metropolitan Arts Council in Greenville. 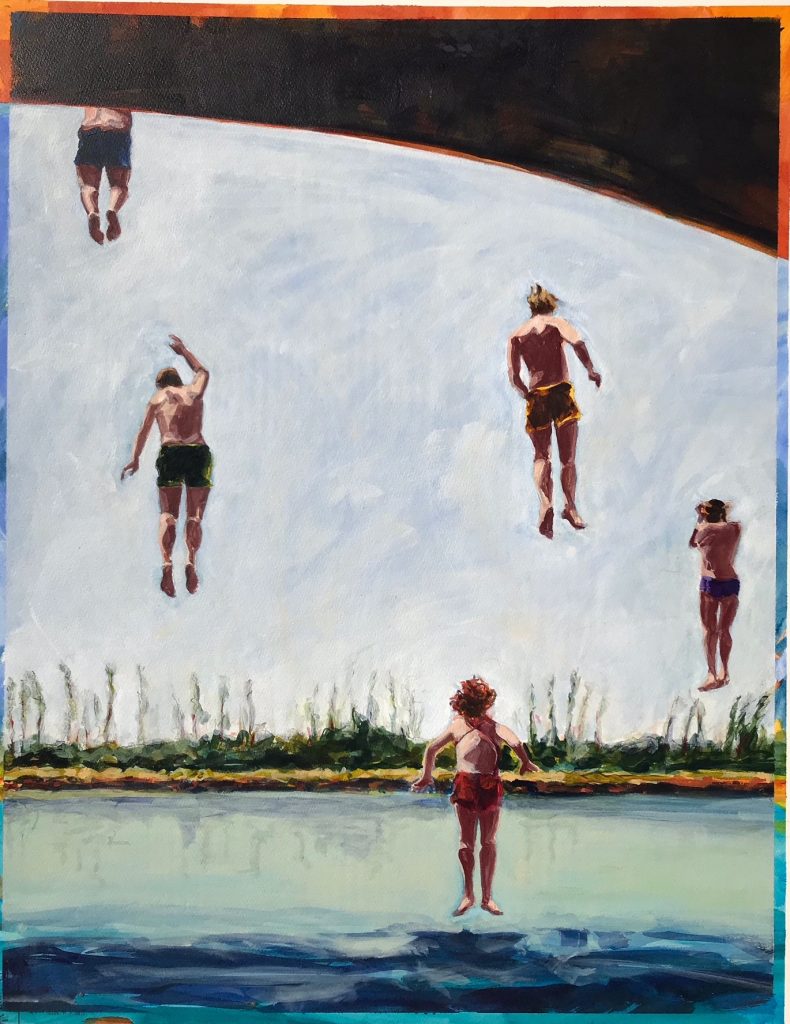 In All Their Vim and Glory by Jo Carol Mitchell-Rogers was entered in MAC’s Flat Out Under Pressure.

“It’s like we’re back in college studying all night,” Mitchell-Rogers said. “Everyone is here working and encouraging one another, and we all take pride when an Art Bomber wins.” That has happened four times in Flat Out Under Pressure’s 10-year run, with Kilgore-Condon winning twice and Paul Flint and Katie Walker each winning once.

For Speaker, who moved to the Upstate from Madison, WI to take a teaching job at Anderson University, The Art Bomb gave him an instant family. “It made Greenville home for me immediately,” he said.

Art Bomb was the catalyst

As for trailblazing, there was no mention of The Art Bomb in a recent story about The Village of West Greenville on the New York Times website. Greenvillians and art enthusiasts shared their outrage on social media, but Kilgore-Condon takes it all in stride.

“We’re not open to the public, so it makes sense that they wouldn’t necessarily include us,” she said.

But many credit The Art Bomb as being the catalyst for what is now the trendy, artistic and entrepreneurial district called The Village of West Greenville. 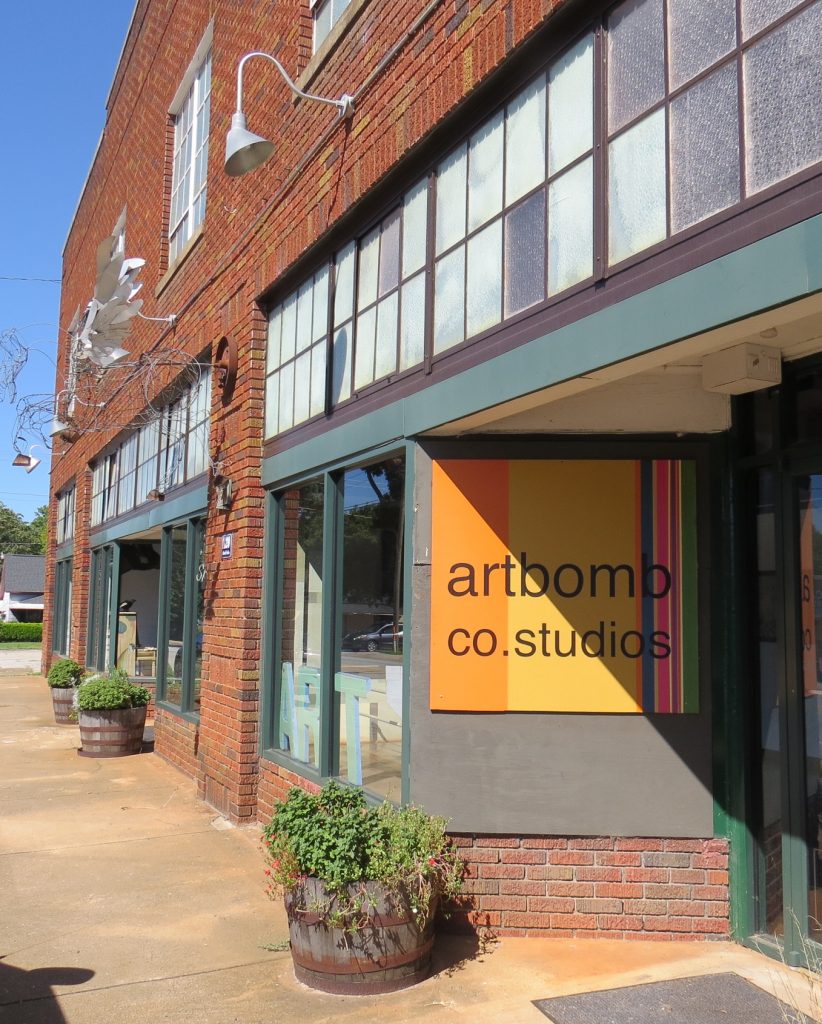 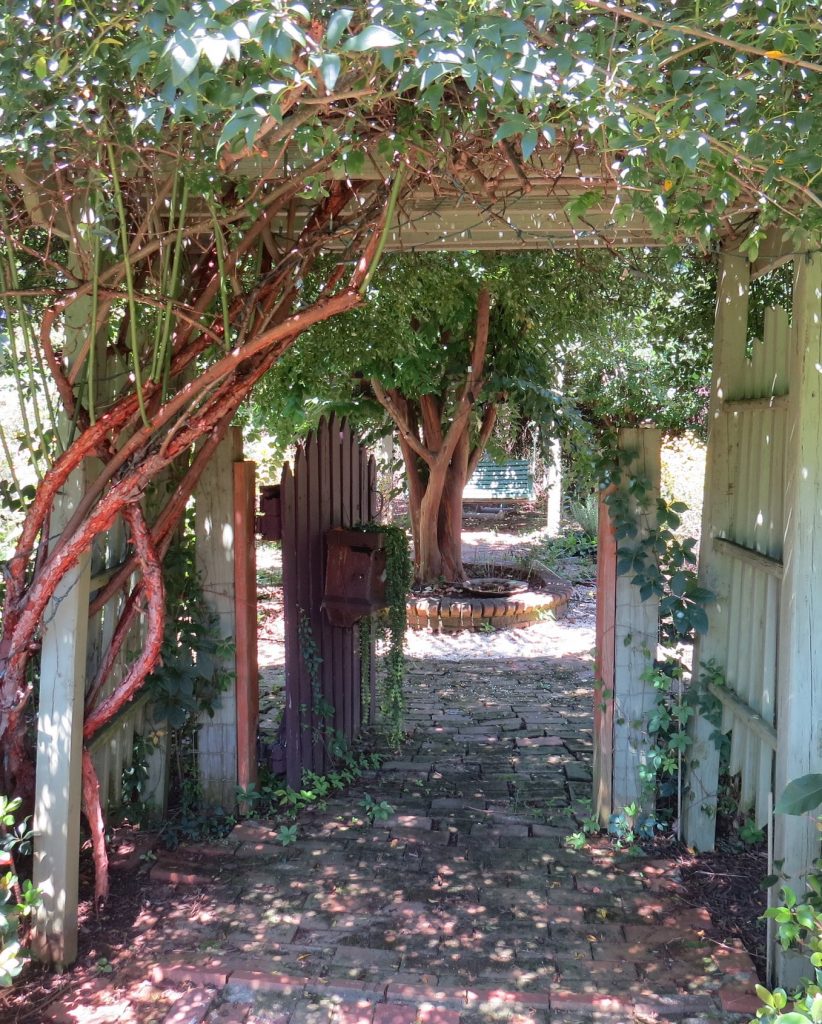 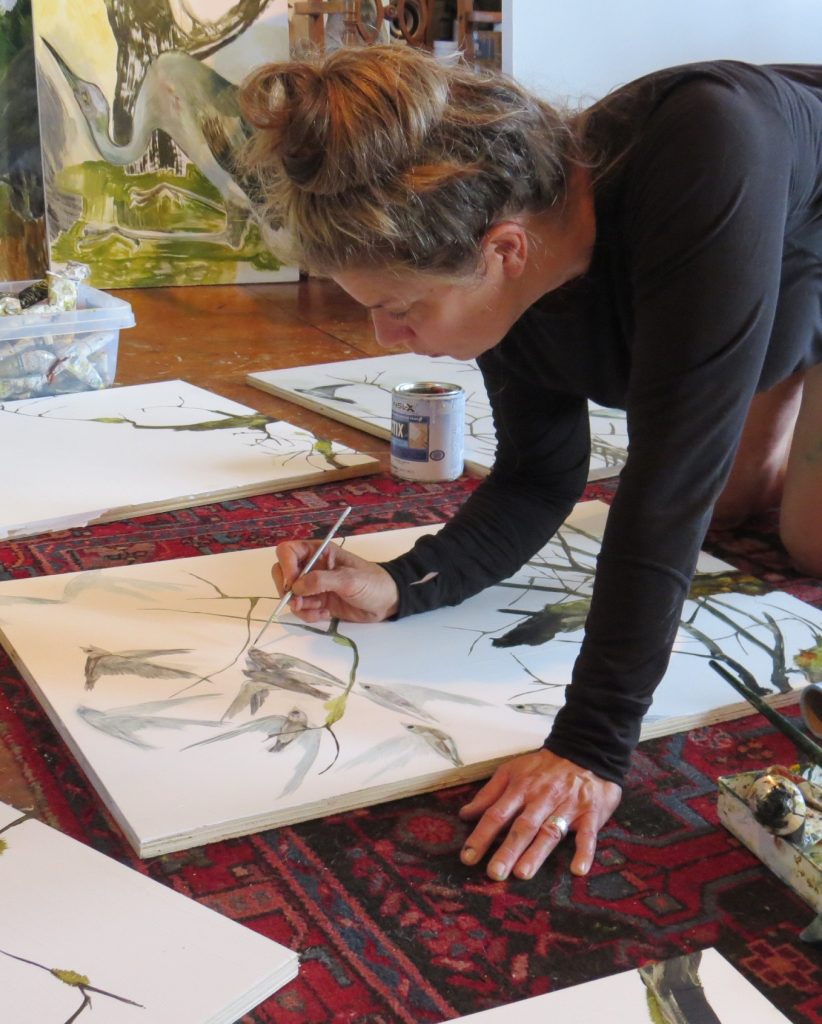 “It’s great that we now have places nearby to grab a coffee, a beer or a meal,” says Speaker, “but I don’t believe any of this would have happened without The Art Bomb.”

Despite the newfound celebrity of the neighborhood, The Art Bomb will continue to be a sanctuary where artists can create in their own space and time, and a place where lasting friendships form – some of the four-legged variety. 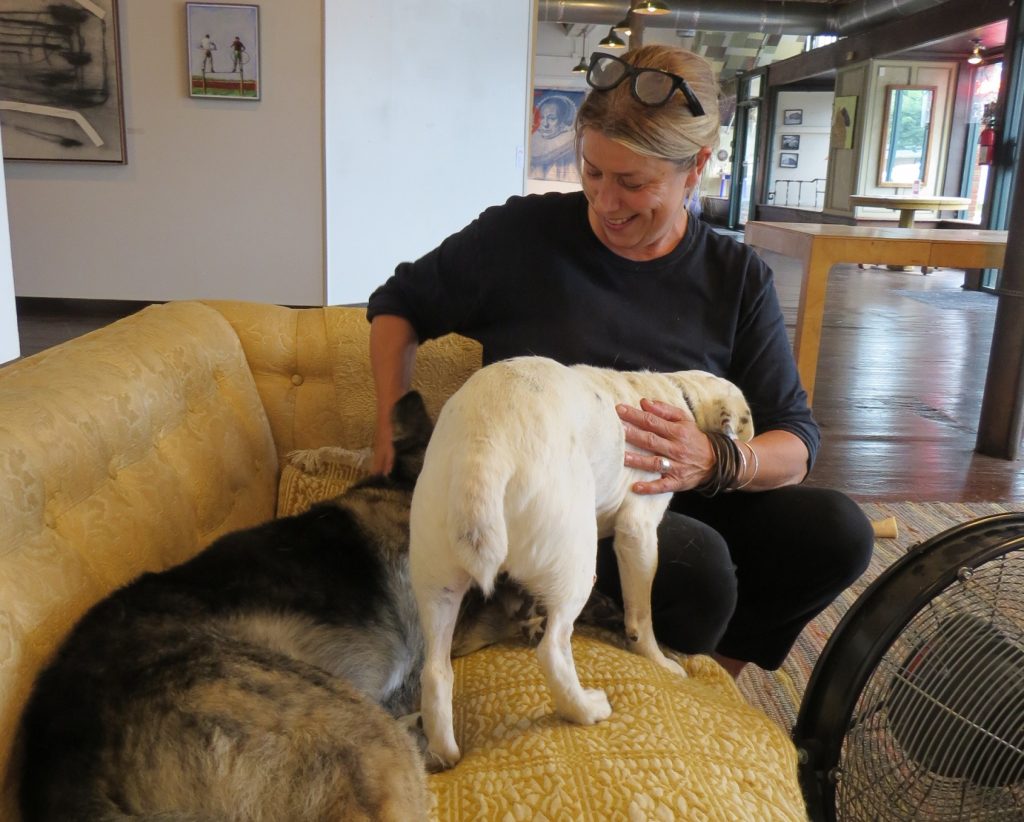 Diane with recues Dixon and Hammy. 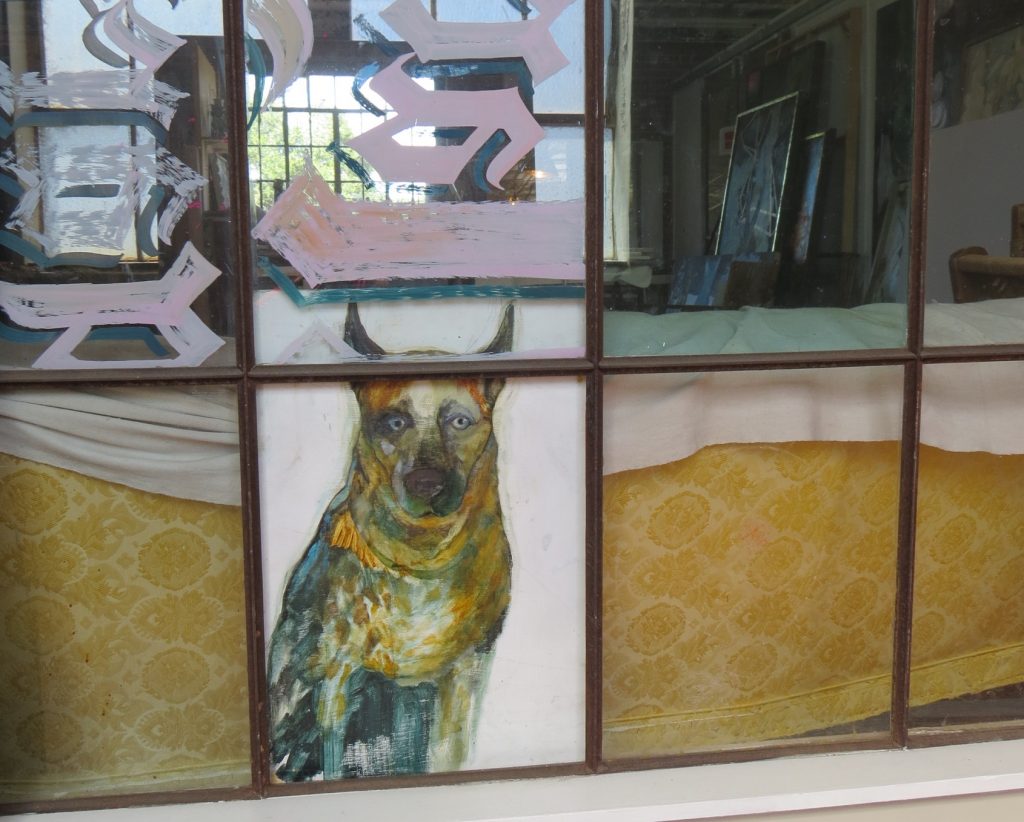 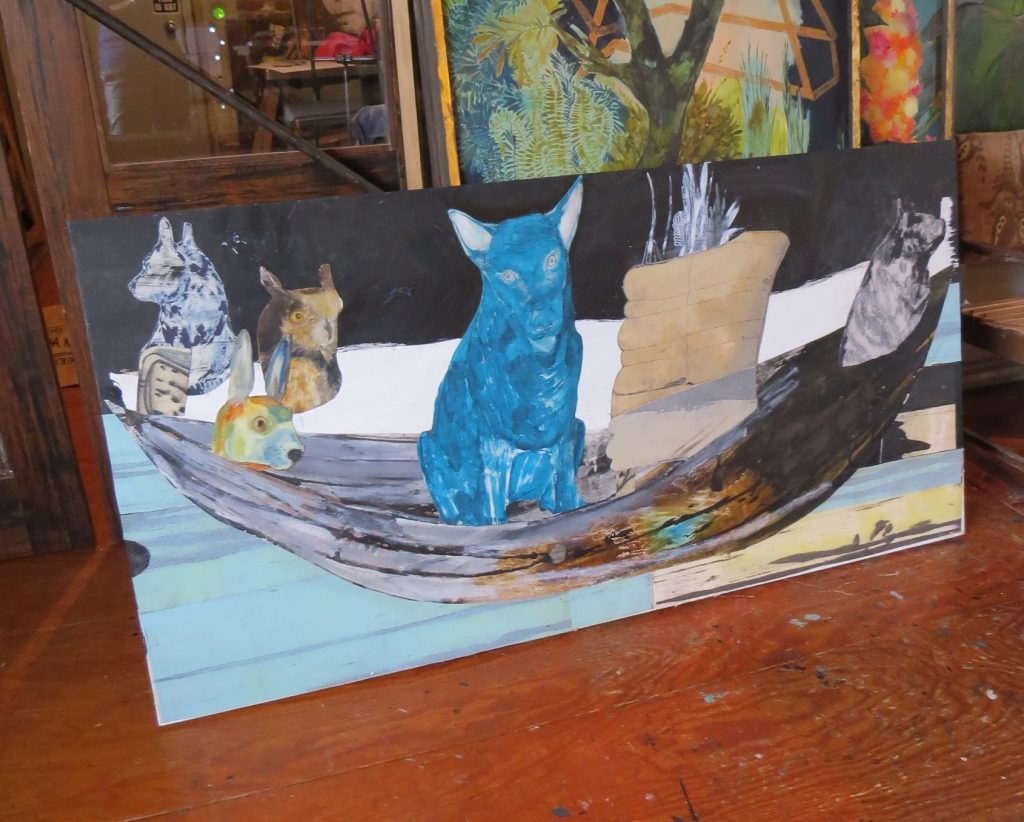 Elsie was the inspiration for this Diane Kilgore-Condon painting.

In almost  20 years, The Art Bomb has rescued 44 dogs from the streets of West Greenville. “We bring them in, get them fixed up and fixed, get them on heartworm preventative and flea meds, then put the word out. Our artists and a lot of our friends have taken them in,” Kilgore-Condon said. Kilgore-Condon’s beloved Elsie, a puppy she found abandoned on a nearby street, was her constant companion for 14 years and a muse for many of her paintings.

Open to the public on exhibition evenings and during Greenville Open Studios November 8 – 10, 2019. Please call 864-220-3131 for an appointment to view or purchase work.