Shirley Temple Is Missing and other Smith and Durham mysteries

Kathryn Smith and Kelly Durham first crossed paths in the principal’s office at Daniel High School in Central. She was there to receive a writing award, he for a much different reason.

It would be 30-plus more years before their next encounter led them to collaborate on a series of novels known as the Missy LeHand Mysteries.

Published in August of this year, FDR’s Convention Conspiracy marks the fourth book in the fictional series inspired by the very real Marguerite LeHand, the private secretary to President Franklin D. Roosevelt.

The series got its start after Smith wrote The Gatekeeper, a non-fiction book about LeHand, in 2016. Smith subsequently has given more than 200 talks about LeHand and the Roosevelts at venues around the country including the FDR Library and Museum in Hyde Park, NY, and the National World War II Museum in New Orleans. Dressed in period costume, she gives audiences a sassy and humorous low-down on life with the Roosevelts.

“I just love Missy so much as a person,” Smith said. “I started thinking about how fun it would be to turn her into a fictional character.”

That’s where Durham comes in. But first, a little background.

A Wendy’s franchisee for 30 years, Durham didn’t begin writing until the age of 50. A newspaper reporter on the front end of her career, Smith went into nonprofit work for 17 years and picked up writing again after stepping down as executive director of the Cancer Association of Anderson.

The author of eight thrillers set against the backdrops of World War II and the Golden Age of Hollywood, Durham crossed paths again with Smith as he was working on his third novel. The meeting was aided by Smith’s mother who had purchased one of Durham’s books and after reading it, passed it along to her daughter.

“Dot called Kathryn and said, ‘you know, Kelly’s a pretty good writer but he could really use some help with punctuation and grammar,’” Durham recalls. “I now realize that anything I do is better when Kathryn reviews it and gives me a critique on it.”

Now, back to our story.

“Kathryn called me one day to say that she had an idea for fictionalizing Missy LeHand and this was the idea: Shirley Temple is missing,” Durham recalled. “That was it.”

But the idea unfolded and became the first of four books in the Missy LeHand Mystery Book Series by Kathryn Smith and Kelly Durham. 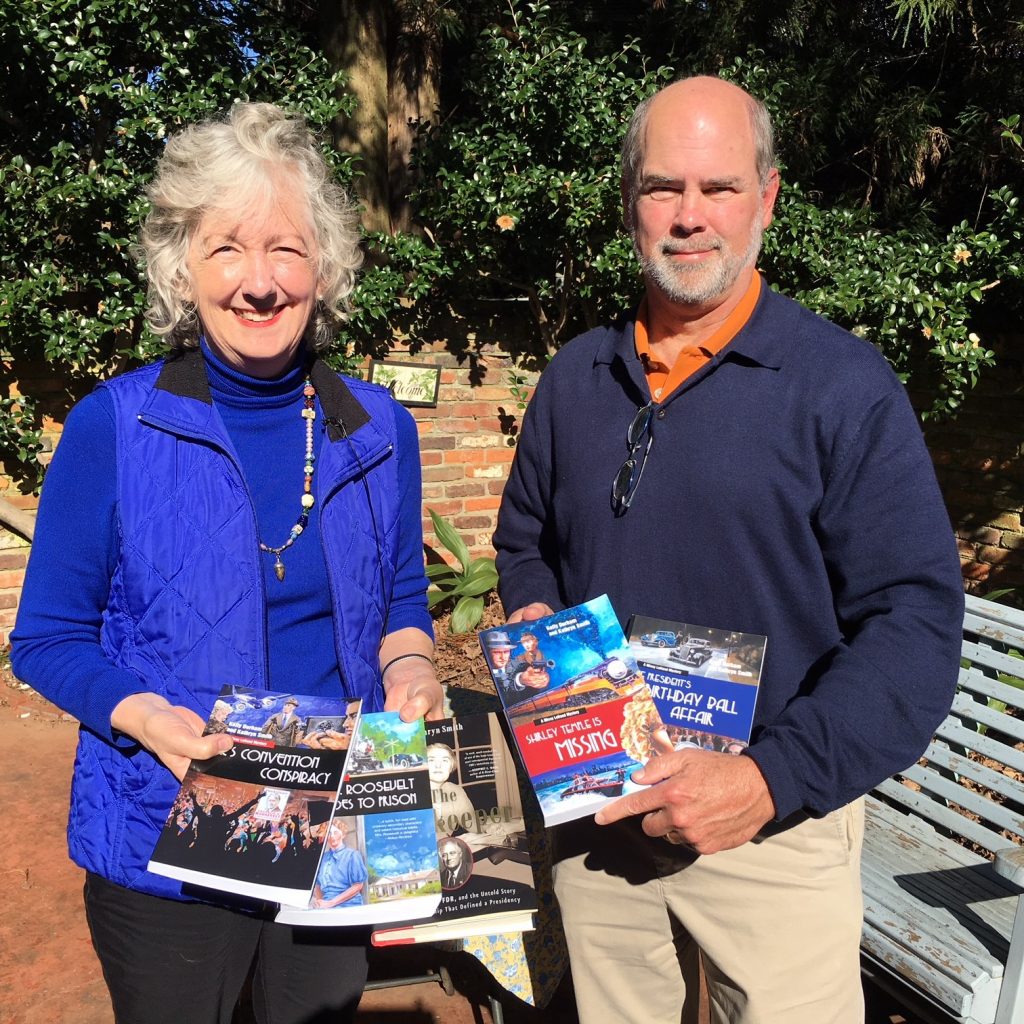 The writing process begins with the authors meeting to discuss a plot, then Smith pens chapters with characters she knows best and likewise with Durham. There are three major characters in the Missy LeHand series: Missy, President Roosevelt’s multi-talented private secretary; Corey Wainwright, a good-looking FBI agent who is Missy’s love interest; and a bad girl Hollywood reporter brought over from Durham’s Pacific Pictures book series.

“When we get to the point in the story where we have to put chapters together, then we negotiate who is going to write what scenes and what those scenes will be,” Durham explains.

A common thread in each Missy LeHand book is a Hollywood starlet like Shirley Temple, Ginger Rogers and Ida Lupino. The pair’s latest collaboration, FDR’s Convention Conspiracy, delivers action, mystery and glamour in the midst of a tumultuous re-election campaign at the 1936 Democratic convention – with the help of Bette Davis.

“We root these stories in fact,” Durham said. “Then we take that little kernel of truth and create a web from it.”

Adds Smith, “There was a lot going on behind the scenes at that 1936 convention and we made a lot more go on.”

For Smith, the fulfillment of being an author is in the writing. “You just can’t take away from the fun and satisfaction of writing a book.”

Adds Durham, “I don’t want to speak for Kathryn but if we didn’t sell any, I would still do this because it’s fun. It’s just fun.”

Books by Kathryn Smith and Kelly Durham are available on Amazon and can be purchased locally in the Whitner’s Mercantile gift shop at the Anderson County Museum.