Editor’s Note: This is a follow up to Upstate disability advocate Sandy Hanebrink readies to walk for first time 34 years posted on Sept. 6.

Growing up in the Upstate, Sandy Hanebrink and her family spent weekends on mountain trails discovering the region’s many waterfalls. This week, Hanebrink went on her first waterfall adventure in more than three decades, walking the trail at Table Rock State Park with her new SuitX exoskeleton assistive walking device.

“For the last 34 years, I haven’t been able to do that because trails aren’t very wheelchair friendly,” said Hanebrink, who was paralyzed after an allergic reaction to medication used during surgery to repair a jaw injury. “I can only see waterfalls that I can drive by in my car or that are on a paved, relatively flat surface but that’s not where waterfalls exist. Now, I’ll be able to get back out and do trails. It will also help with the consulting work that I do in the community because I can actually get on the trails instead of crawling or having someone drag my wheelchair through the muck.”

“It’s been about an eight-year journey to find the right technology,” said Hanebrink, who is Executive Director of Touch the Future Inc., a nonprofit organization that provides assistive technology products, programming and training to help disabled individuals achieve independent living.

“Knowing that it was the countdown – how many days, how many hours until I was going to be meeting Michael to get everything set up. To be able to do that, I don’t know, it’s pretty emotional,” Hanebrink said. 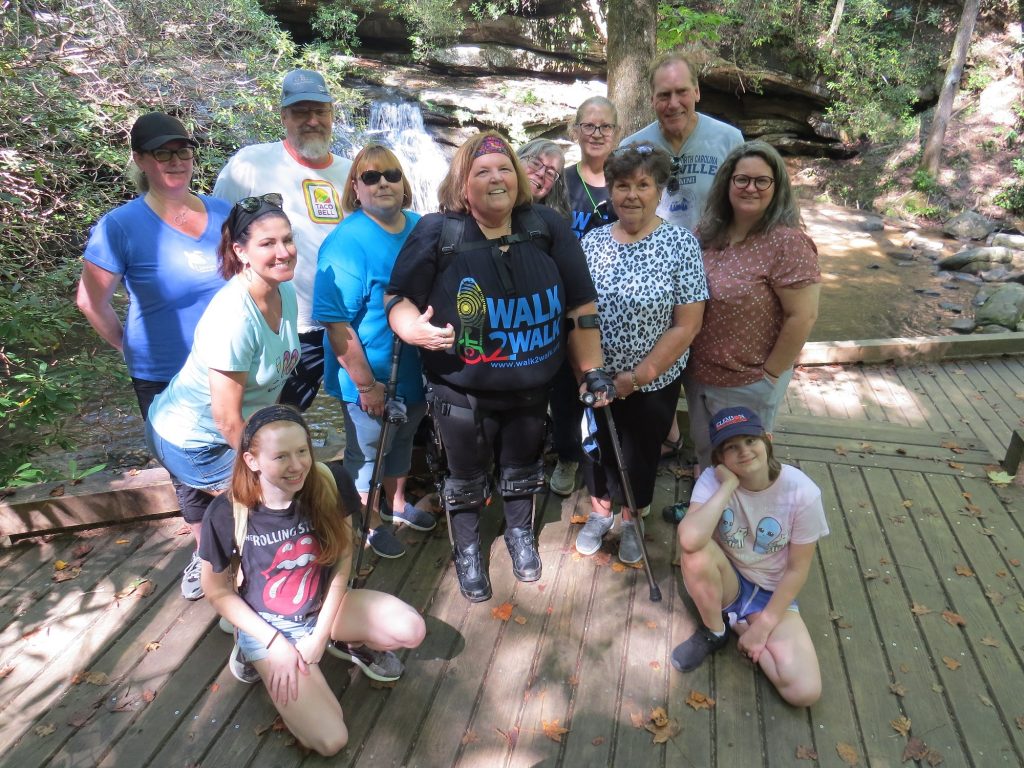 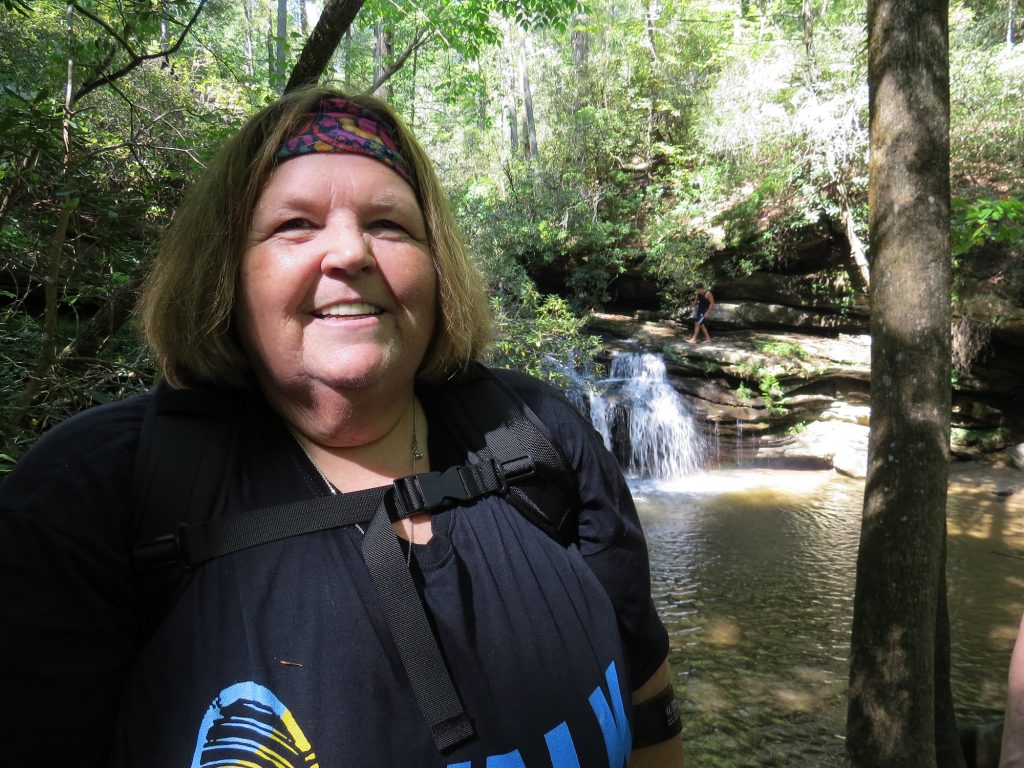 Hanebrink applied for grants, held fundraisers and put her life savings toward the $65,000 price tag of her exoskeleton, and still has about $10,000 to go. The cost of many assistive devices puts them out of reach for most, so that’s why Hanebrink and others in the disability community are advocating for insurance codes from the Centers for Medicare & Medicaid Services.

“It’s critical to get (CMS) codes in place so that this amazing technology will be available for everyone,” Hanebrink said. “And it’s not just the walking. There are so many health benefits – bone density, your bowel and bladder function, skin integrity, cardiovascular. The fact that you’re moving. Even if I have a trace muscle twitch, this has the potential of strengthening that, because if you have it, you can get it stronger.”

Michael McKinley, co-founder of Emeryville, CA-based SuitX and a developer of the assistive walking technology, was in the Upstate last week to ready Hanebrink and her team of physical therapists for real-world use of her exoskeleton.

“We know that this is a system that was designed from the ground up as something that could be easily adaptable to many individuals and it’s a perfect tool to leverage residual function and to get to the next level of your ability,” McKinley said.

Designed to be more like a Lego set, PhoeniX exoskeletons can be quickly altered for different users and varying conditions by using simple tool-free adjustment mechanisms. And an accompanying tablet app can quickly change walking parameters. 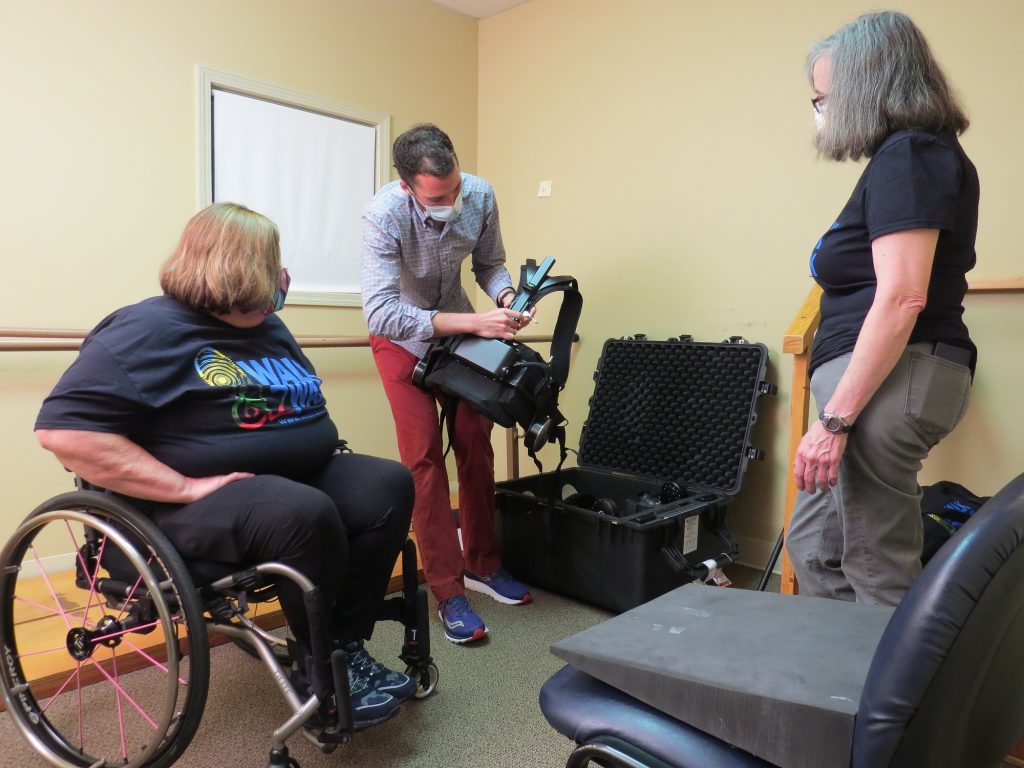 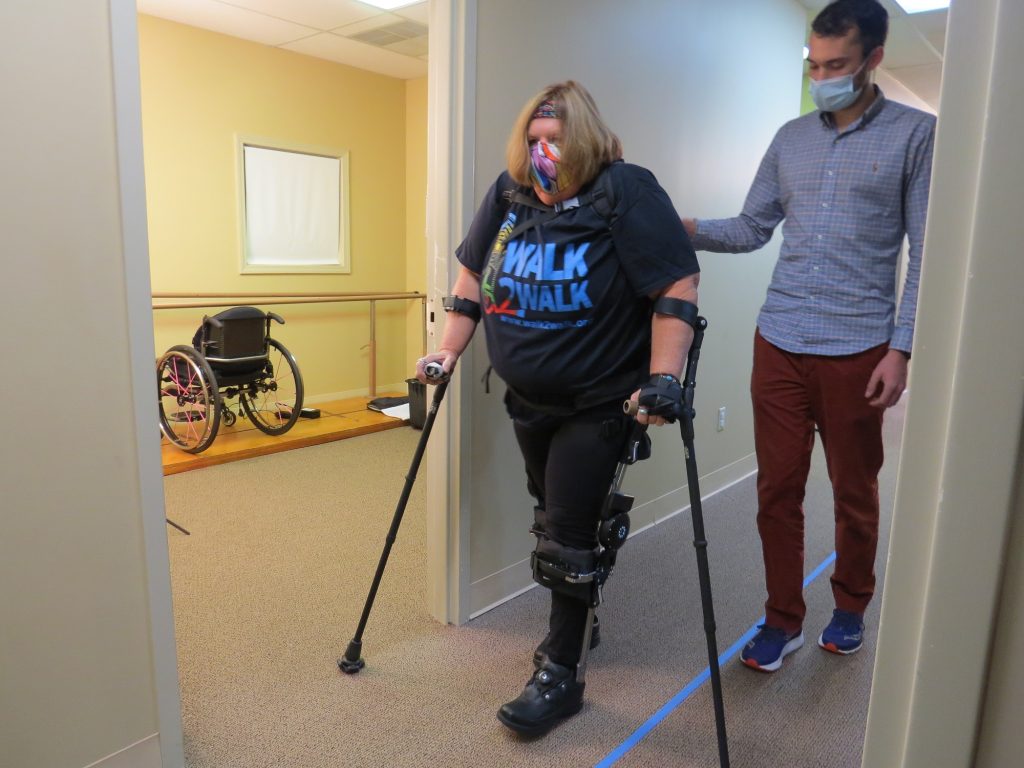 “Everyone has a different fingerprint in their walking” McKinley explained. “By the time Sandy goes from day one through day 100, (the technology) will be evolving the walking gait so that it better suits her needs.”

Assistive walking technology previously has been available only in major rehab centers in larger cities, making it inaccessible to those in smaller communities. Partnering with as many small clinics and rehabilitation centers as possible, PhoeniX hopes to raise the awareness and the availability of its exoskeleton.

“What’s nice about what SuitX has done, they’ve gone into local, little clinics where most people live,” Hanebrink said. “To be able to access it at your local Hanger Clinic (in Anderson) or your local hospital’s outpatient rehab opens the opportunity for so many more people.”

For its part, Touch the Future has launched a program called Walk2Walk to generate awareness of various approved home use walking technologies and to raise funds for those wishing to obtain the technology that Hanebrink is the first in South Carolina to receive.

“Technology makes the impossible, possible,” Hanebrink said. “And what technology does for people with disabilities is life itself.”

Go HERE to help and to get more information on the Walk2Walk campaign.