Riverstead symposium explores sustainability and resiliency in the Upstate

The exploding popularity of local farmers’ markets and farm-to-table dining has made terms like “locally-sourced,” “sustainable,” and “resilience” part of today’s lexicon.

Developers across the country are turning this trend into a true lifestyle with communities called agrihoods that feature a working farm as the focal point of the community rather than a golf course. Riverstead, a 418-acre agrihood off Freeman Bridge Road in northern Greenville County, is not only creating sustainable living for its residents but also is spreading the word about how the Upstate can become more resilient in the face of changing weather patterns.

Last week, Riverstead hosted a Sustainability and Resilience Symposium featuring a panel of experts that included farmers, educators and a former U.S. Director of National Intelligence who discussed every aspect of climate change from food sovereignty to national security. The symposium was hosted by Patrick McMillan, PhD, the Glenn and Heather Hilliard Professor of Environmental Sustainability at Clemson University and director of the South Carolina Botanical Garden.

“This is one of the most remarkable panel of experts that I have seen gathered to speak on every aspect of resilience and how we achieve sustainability in a resilient landscape,” McMillian said.

Local food production and the capacity to grow our own food is vital to sustainability and self-reliance and something more and more Americans believe to be important, according to panelist Robert Turner, Executive Director of the Creekside Farm Education Center and author of Carrots Don’t Grow On Trees.

“We’ve got to cut down on the 1,500 miles that the average vegetable travels to get to the grocery store and develop a greater connection to local food sources,” Turner said. He added that he sees hope in the more than 9,000 local farmers markets that exist around the country today – a jump from 1,700 just two decades ago, and the 200 agrihoods that have been developed around the U.S.

Teaching young people about the important role agriculture plays in our daily lives is another way of spreading the sustainability and resiliency message, according to symposium panelists Bruce Adams, Farm Manager at Furman University, and Patsy Wood Smith, Director of School Based Programs at the Youth Learning Institute of Clemson University.

“Sharing information about our food system and having students put their hands in the soil teaches them life skills,” Adams said.

Furman’s quarter-acre farm grows a variety of produce that is sold to Furman’s on-campus food service provider and others, and food waste from the Furman Dining Hall is composted to create nutritious soil to fertilize campus crops. “Our farm program goes full circle,” Adams said.

“All of our students attend a physical education class every day and they also have a 20-minute recess period,” Smith explained. “We have found that a connection to the outdoors improves our students’ academics and creates young adults who can better weather life’s storms.”

The South Carolina National Heritage Corridor is aiding sustainability and resiliency by addressing the state’s leadership crisis, according to President & CEO Michelle McCollum.

“Those in business and industry told us that they need a next generation workforce that is environmentally sensitive,” McCollum said. “No one is talking with our young people about environmental science and the responsibility they have in protecting the environment.”

In response, the SC National Heritage Corridor has launched YES (Youth for Environmental Sustainability) to teach environmental science and to raise awareness among high schoolers about career paths that allow them to earn a living while protecting the environment, McCollum said.

“A warmer climate brings about floods and droughts,” McConnell said. “Modest rainfall means that crops dry up and water becomes scarce. Those things lead to a change in living conditions in certain countries, which leads to migration and mass immigration.” 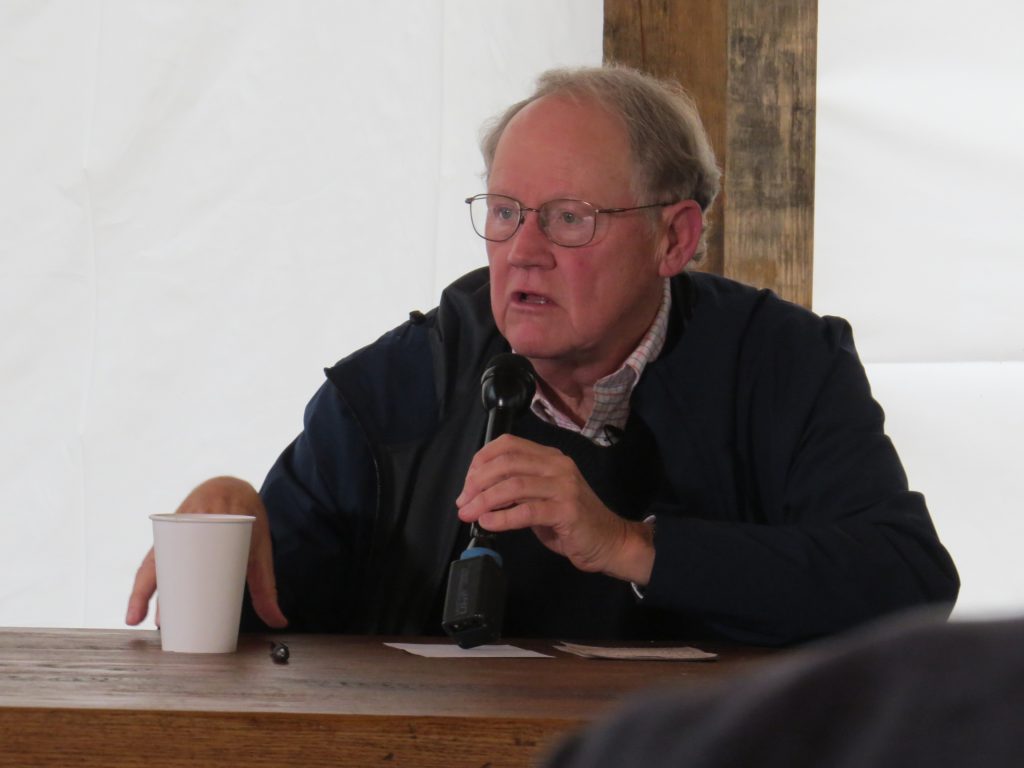 McConnell earned an undergraduate degree in economics from Furman University, serving 29 years in the U.S. Navy and retiring as a Vice Admiral in 1996. In 2007, President George W. Bush tapped McConnell to become the second Director of National Intelligence. McConnell said he is returning to his South Carolina roots to serve on the board of The Carolina Crescent, a nonprofit organization that advocates for sustainable, resilient growth and educates Upstate citizens on the unique nature of this naturally resilient region.

Committed to conservation and open spaces

As the Palmetto State’s first agrihood, Riverstead has set aside 250 acres for nature conservation and open spaces. More than 17 acres is devoted to agriculture including a working farm with organic growers who are on site daily caring for land, crops and animals.

Agrihood-grown fruits and vegetables, meat, eggs, milk, butter and honey are available each day from the community’s Harvest House located inside the Family Barn. Edible landscaping like vineyards, orchards and berry fields are scattered throughout the community and 53 large homesites ranging from one to five acres allow plenty of room for personal gardens.