Partnering with Upstate Pickleball, UCAN has added three pickleball clinics for those in the Upstate with a physical disability. One of the few area providers offering adaptive sports, Prisma opens its programs to anyone with a disability whether they received rehabilitative treatment at Roger C. Peace or at another facility.

“We’re always trying to find new sports that we can introduce to people with physical disabilities to keep them active and engaged,” said Recreational Therapist Kristen Caldwell of Prisma Health. “You can’t just run to the local YMCA and sign up for an adaptive pickleball program. That’s why we’re always trying to partner with local providers like Upstate Pickleball. They’re the experts but we can bring some of the adaptive equipment that is necessary for these folks to play the same sports that you or I would want to play.”

Sandy Halkett of Upstate Pickleball believes the game provides physical and mental therapy for those with disabilities, given the social aspects of pickleball.

“I’m just thrilled that they’ve entertained offering pickleball,” said Halkett, who also serves as an instructor for adaptive golf. “We did a trial (pickleball) clinic, and the folks did not want to leave. Right now, we’re at three clinics per year and we hope to grow it with them.”

In adaptive sports, modifications are made that allow people with disabilities to participate. For example, the wheelchair pickleball player is allowed two bounces of the ball on his or her side of the net, and the second bounce can be anywhere inside or outside of the court boundaries.

For former tennis player Barry Jenkins of Piedmont, pickleball reminded him of a game he and a buddy devised several years ago which was played inside the serving boxes on the tennis court.

“I was very athletic until my body started falling apart at about age 40,” said Jenkins, a double amputee. I didn’t know how hard (pickleball) would be for an amputee but I’m enjoying my first try at it. I think with more times doing it, I’ll get a little better.” 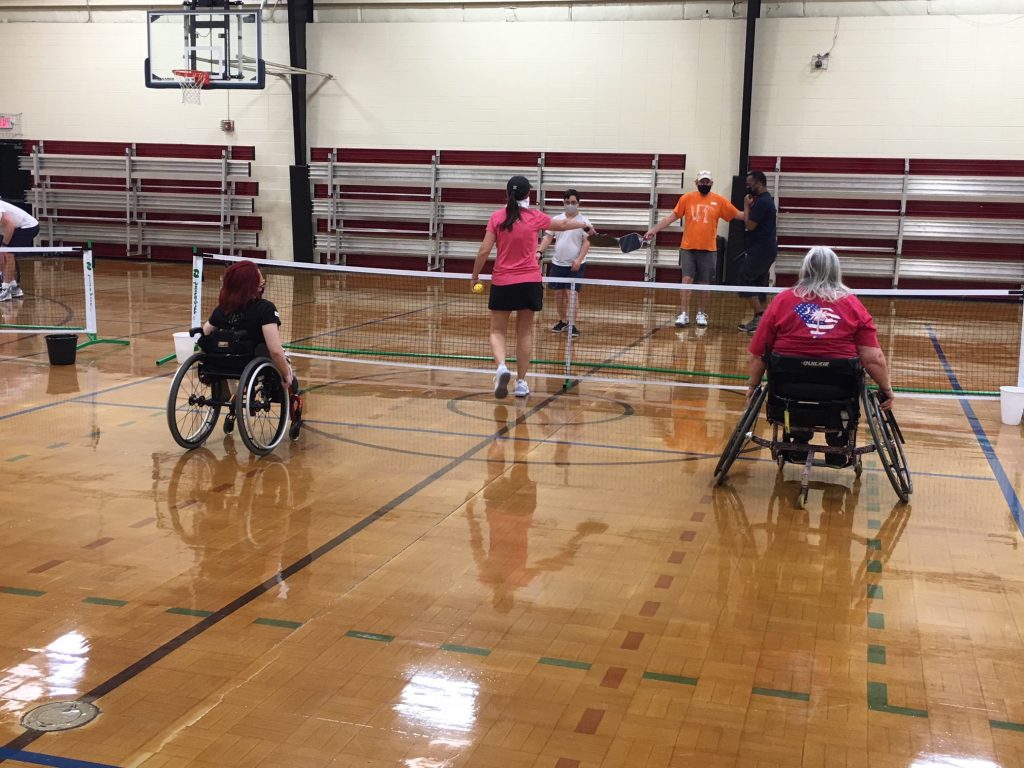 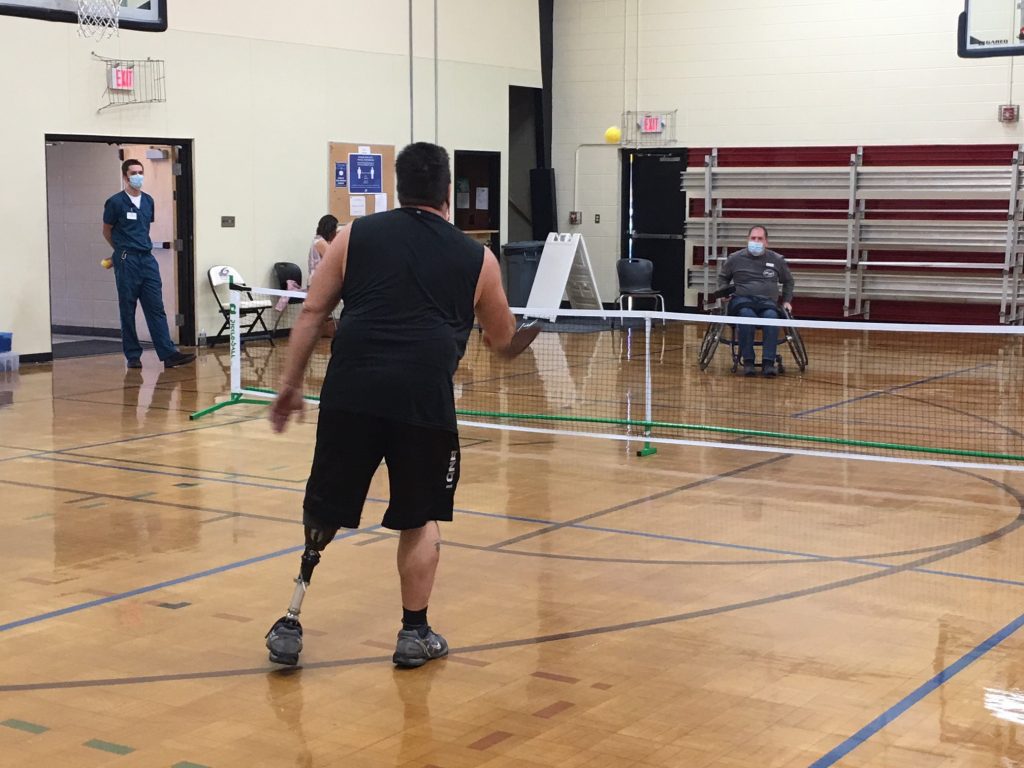 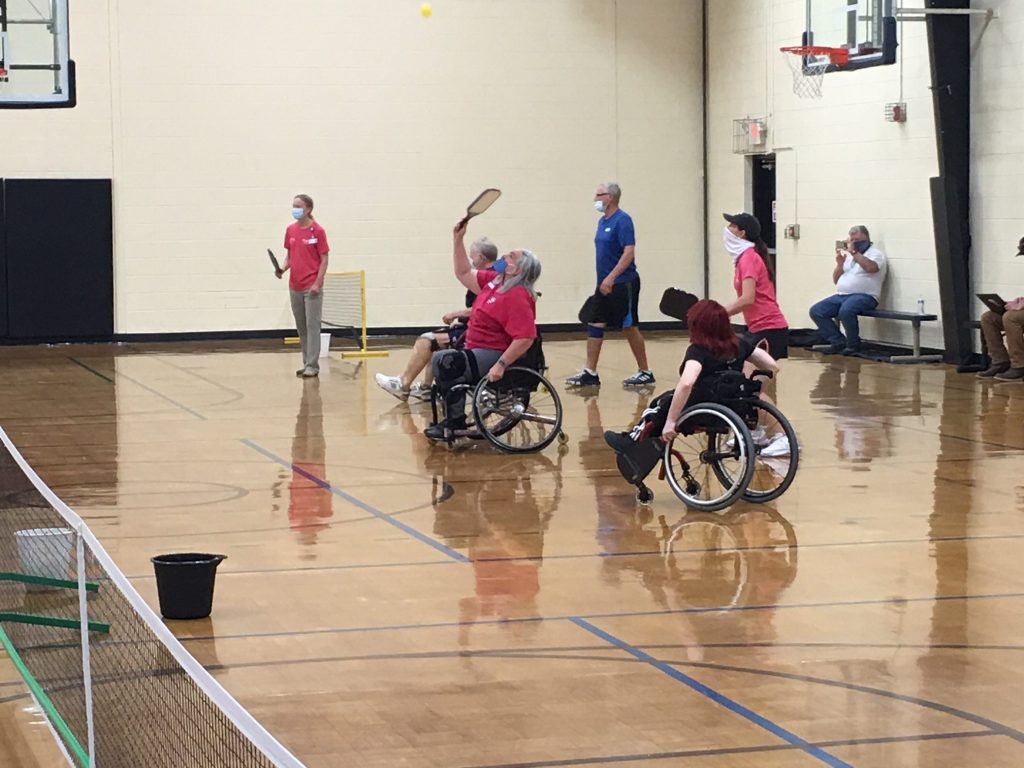 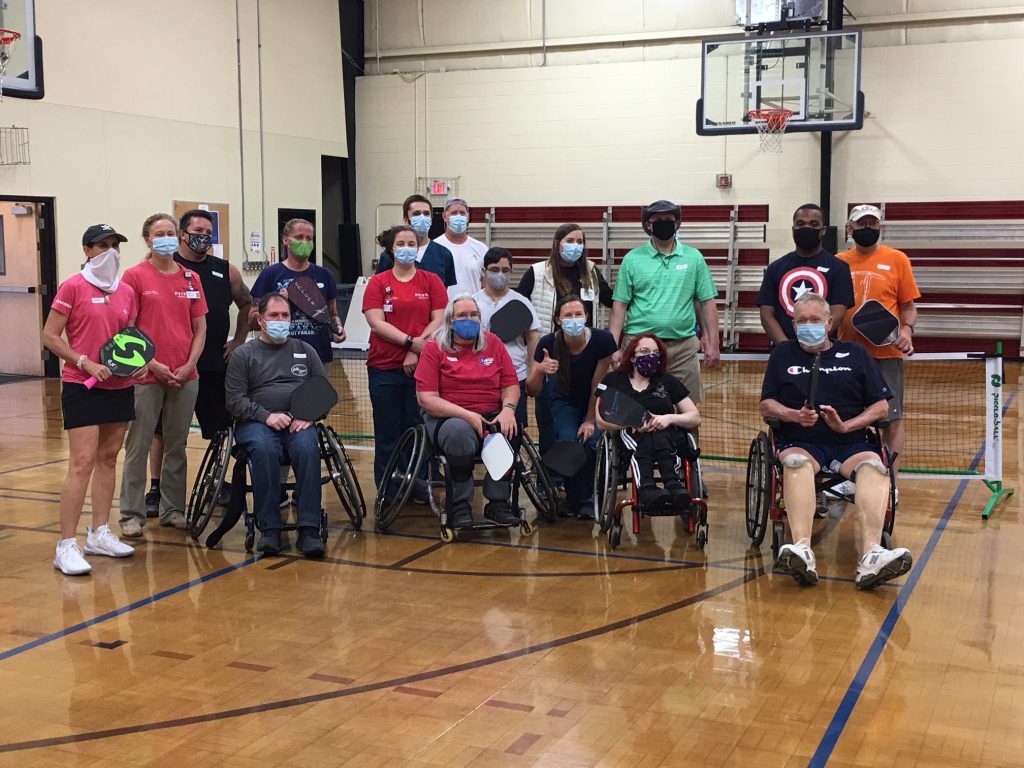 Jenkins, who also has tried adaptive tennis and sled hockey, says pickleball is his favorite so far.

Abney Osborne became active in wheelchair sports two years ago. Asked to rank her first pickleball experience on a 1-10 scale, she gave it an 11.

“Anyone who has a disability and is looking for a sport of any kind, this is definitely a place to go,” Osborne said. “Being out there and playing the sport, there’s nothing like it.”

Adaptive sports participants range from those who have never played a particular sport to those who played prior to an injury but now need to play it in a different way, Prisma’s Caldwell said.

“You often can see their skills shining through, even though they’re now sitting down to play that sport,” Caldwell said. “One of the gentlemen here today has an amazing backhand because he used to play tennis.

“I would love it if someone wanted to sponsor more clinics,” Halkett said. “If we could do this once a month or more, I’m very interested in entertaining that.”

For more information on how you or your business can support the continuation of UCAN activities and events, contact Danielle Fitzmorris, Supervisor of Recreational Therapy, at (864) 455-7711 or dfitzmorris@ghs.org.