The National Historic Landmark plaque on display in the Piedmont Community Building declares the historic significance of this unincorporated community on the banks of the Saluda River. But like many textile towns across the Upstate, the silencing of the mills sounded the death knell for Piedmont’s Main Street.

Recent announcements by local Realtors and developers, and the formation of the Piedmont Historical Preservation Society are working together to restore the vibrancy of this once bustling textile community on both sides of the Saluda River in northern Anderson and southwestern Greenville counties.

Last month, Coldwell Banker Caine in Greenville announced that it would be managing sales and marketing for Piedmont Village, a new community by Greenville-based Red Oak Developers. The development will feature 60 townhomes and single-family residences, 25,000 square feet of commercial space that includes a brewery, restaurants and retail, and a trail system with public river access and kayak landing, according to the Coldwell Banker Caine website. Development is scheduled to begin in the first quarter of this year.

The Piedmont Village announcement comes on the heels of the renovation of the J.P Stevens cotton warehouse on the Anderson side of the Saluda. The historic building has been converted to an event venue.

And at the edge of Main Street on the Greenville side of the Saluda stands the mill’s old company store which was purchased for redevelopment by Greenville-based KDS Properties. Plans call for a complete restoration of the 25,000-square-foot building to house retail, a restaurant, coffee shop and artist studios galleries on the ground floor, and eight apartments on the upper floor. 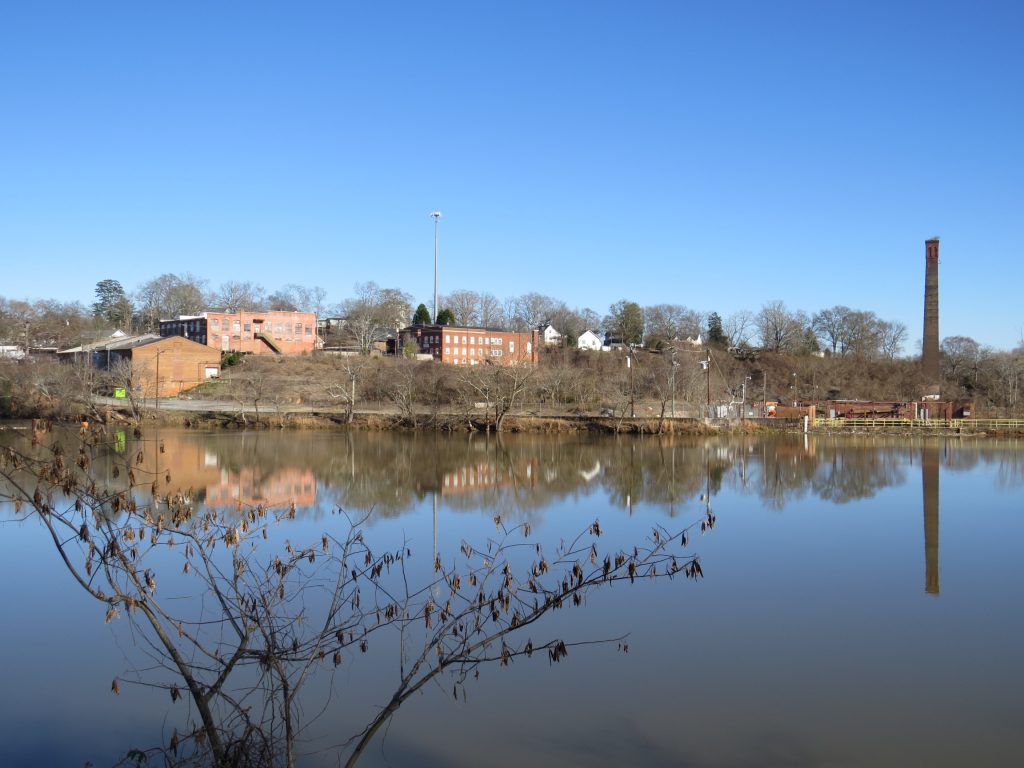 Piedmont SC is located along the banks of the Saluda River in Anderson & Greenville counties. 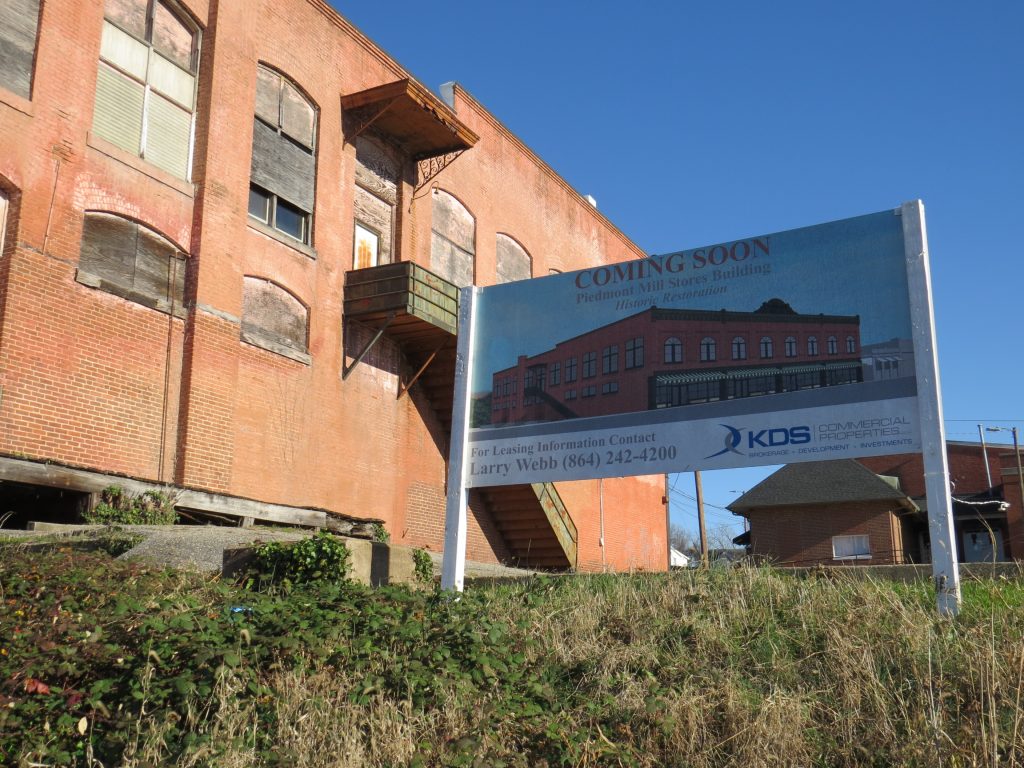 Piedmont’s old mill store will be restored by KDS Properties. 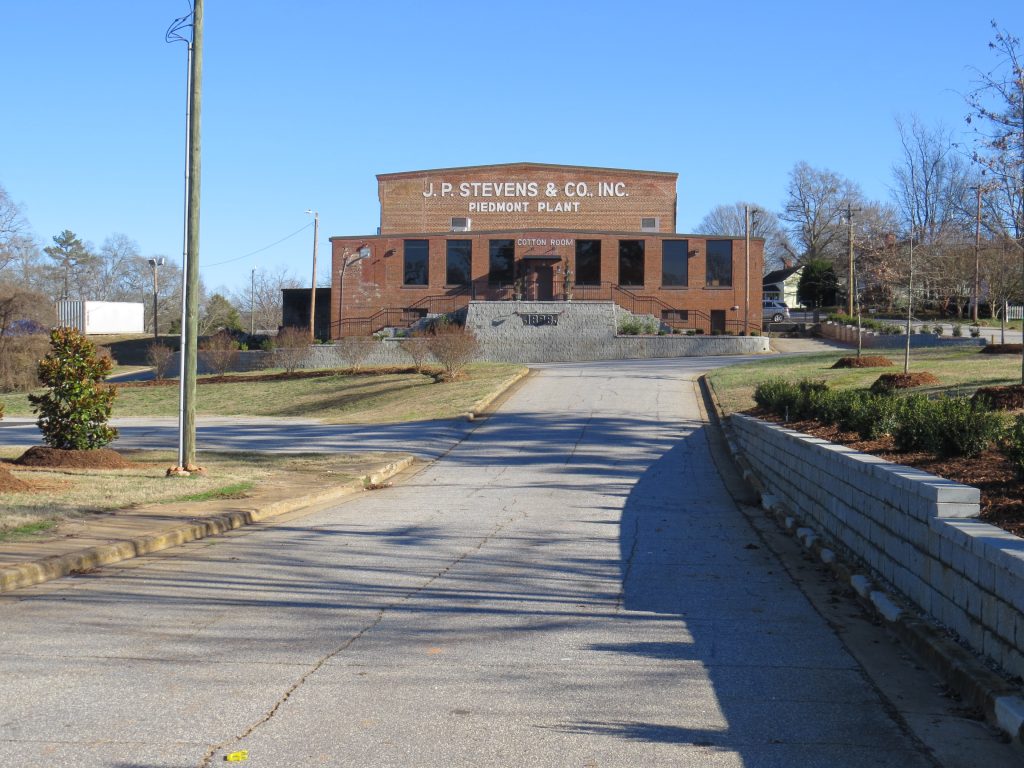 The push to preserve Piedmont

As a member of the Greenville County Historic Preservation Commission, Dr. Anne Peden has been planting seeds for Piedmont’s rediscovery for some time. A retired educator and a resident of nearby Moonville, Peden is leading the push to preserve and promote Piedmont’s historic past and its economic benefits for the future.

When Peden learned that Preserve South Carolina wanted to name the Top 10 most endangered historic resources in the state, an application was submitted for Piedmont’s dam and footbridge across the Saluda. Built in 1888, the walking bridge was constructed over the dam for easy access between mills on either side of the Saluda. Both the dam – the oldest continuously producing power dam in the state – and the footbridge were added to the list. 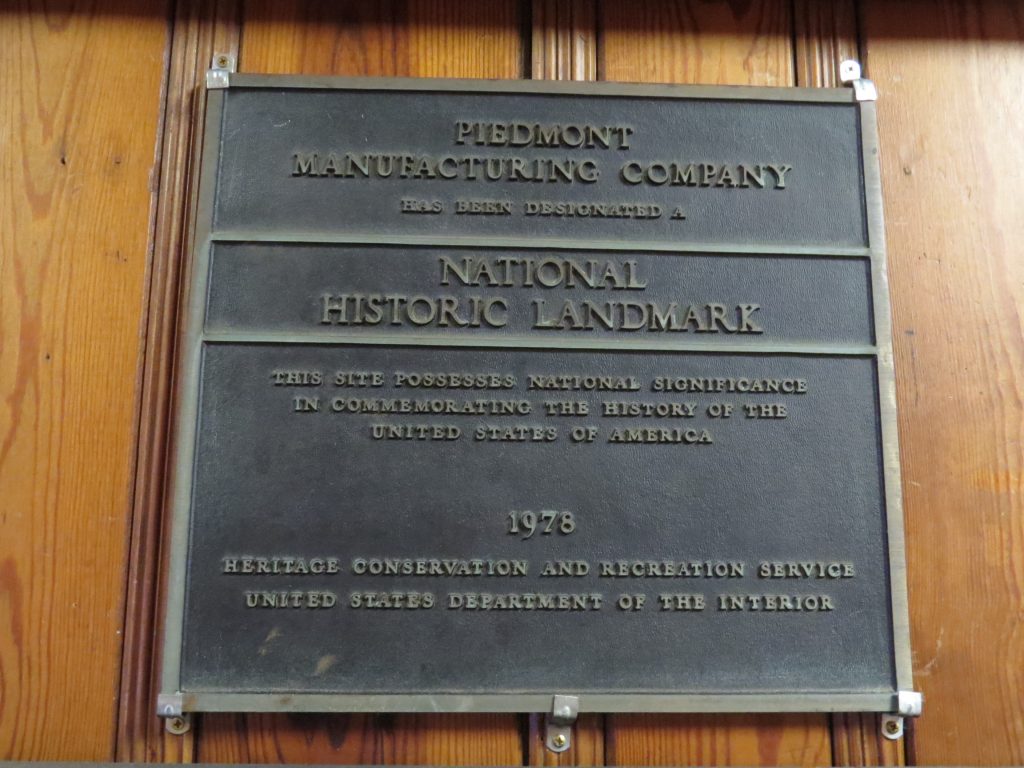 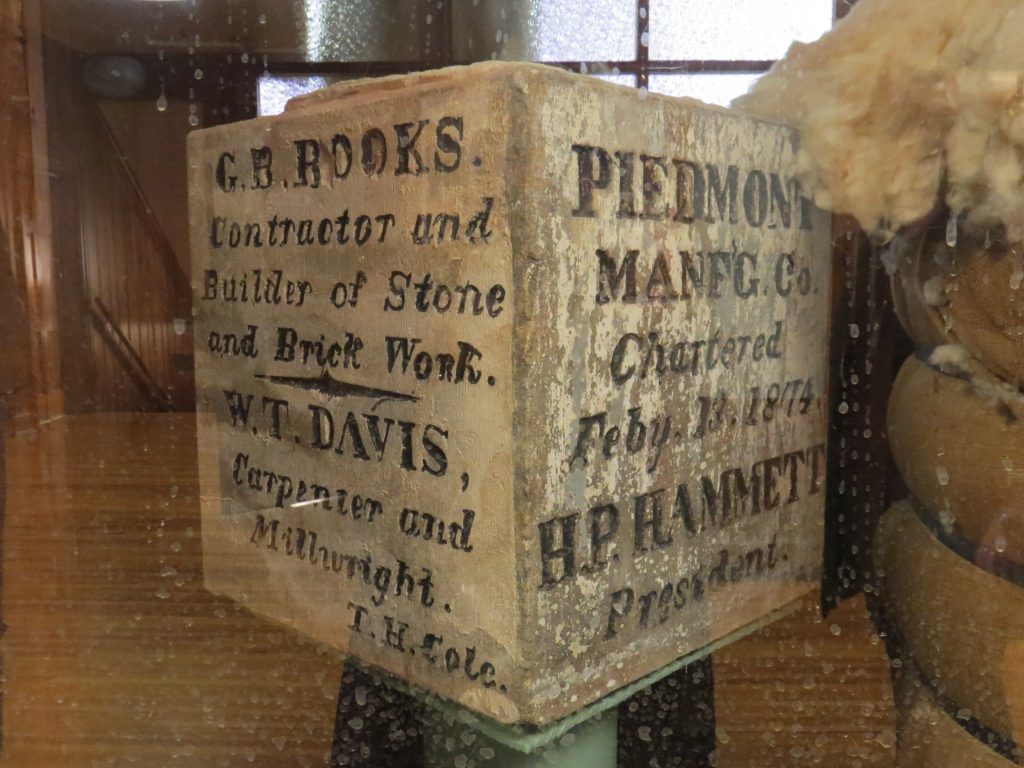 The cornerstone from Piedmont Manufacuring Co. 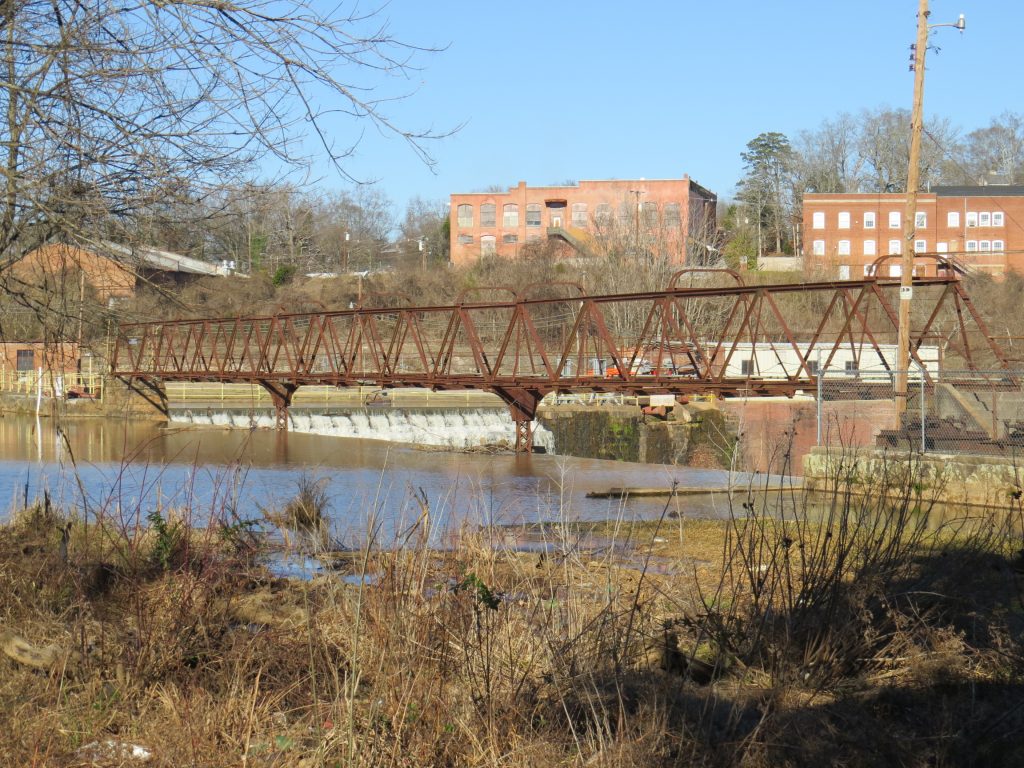 The dam and footbridge across the Saluda River.

The next step was to form the nonprofit Piedmont Historical Preservation Society, a move completed within the last two years. The organization received three major collections in 2019, which are now being chronicled and prepared for display at the Piedmont’s history museum housed in the Piedmont Community Building.

Originally known as Garrison Shoals, Piedmont was once famous for its fishing and for a ford so useful that Native Americans called it “Big Shoals of the Saluda.” It was the site of a Tory fort during the American Revolutionary War and it was the infamous scene of the ambush and murder of the first sheriff of Washington District (Greenville, Anderson, Pickens and Oconee) in 1797.

A grist mill was the first mill to operate in Garrison Shoals, then in 1876, H.P. Hammett opened a cotton mill and named it Piedmont Manufacturing Company. That’s when the town became known as Piedmont.

The kindergarten of the Upstate mills

There were once four mills operating in Piedmont, three on the Greenville side of the river and one on the Anderson side.

“Piedmont Manufacturing Company was the largest mill in the United States prior to 1900 and it was designated a National Historic Landmark in 1978 because of its importance to mill history in the South,” Peden explained. “That designation is on the level of the White House. It’s a big deal.”

Piedmont was such a big deal, in fact, that the sheeting mills opened by Hammett with the help of investors like Greenville’s Vardry McBee were called the kindergarten of the Upstate mills. “Most of the Upstate mill presidents were trained in Piedmont,” Peden said. “Old newspaper articles surmise that if Hammett had not succeeded at Piedmont, the Upstate would never have become the Textile Center of the World.”

An industry and community in decline

A decline in U.S. textile production in the early to mid-80s caused the consolidation of many Upstate mills and the closing of many more. JP Stevens & Co., which had purchased Piedmont Manufacturing Co. in 1946, suspended operation of the Piedmont mills. And in 1983, less than five years after being named a National Historic Landmark, the vacant mill along the Saluda was destroyed by fire. Only its smokestack remains.

After the mill burned and was torn down, the exodus from Piedmont’s downtown began in earnest. By the early 90s, Main Street was a virtual ghost town other than patrons of Permanent Impressions Hair Salon, which has operated on Main Street for the past 25 years. 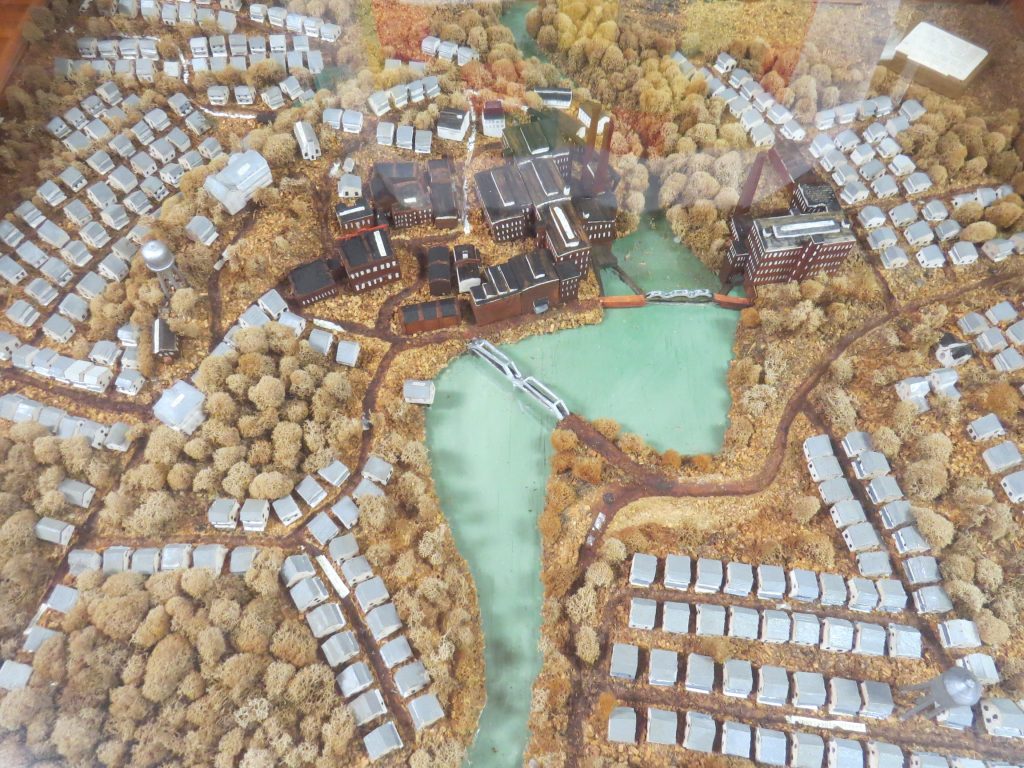 A diorama of Piedmont housed in the town’s history museum. 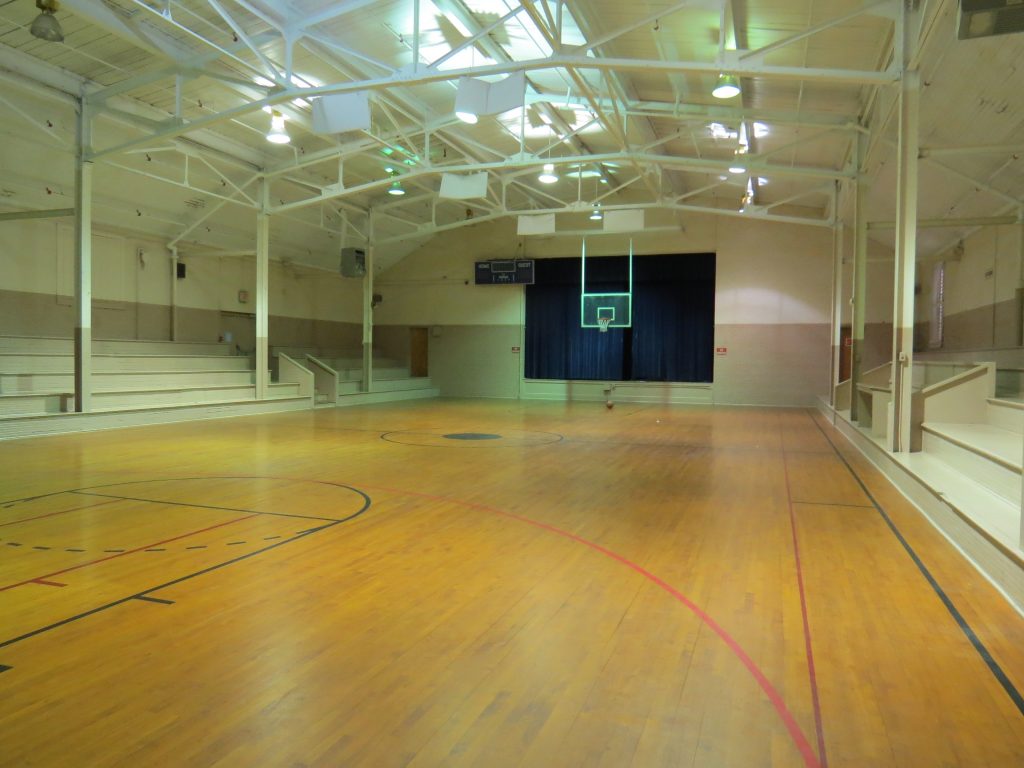 The Piedmont Community Center gym is the largest among Upstate textile towns. 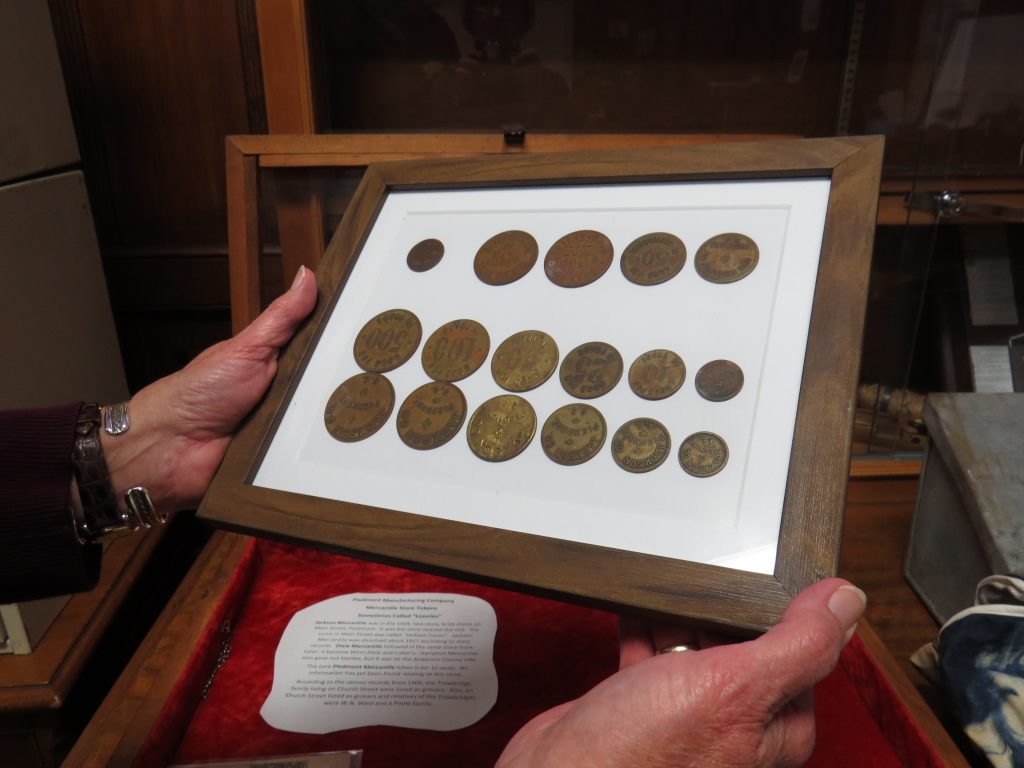 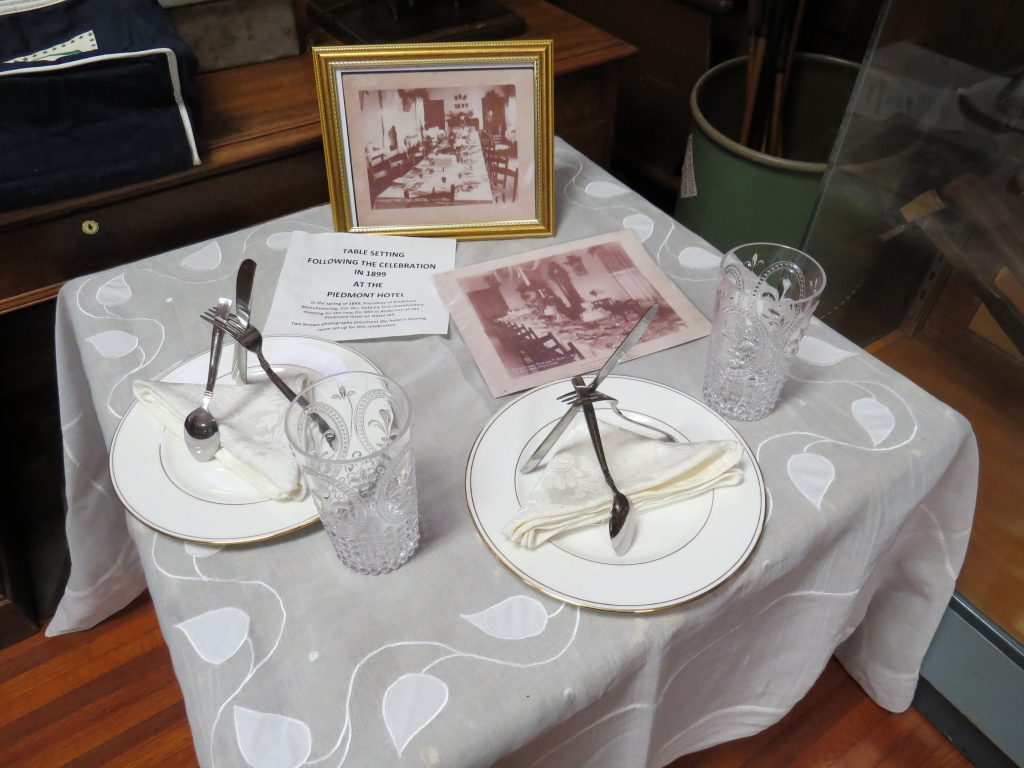 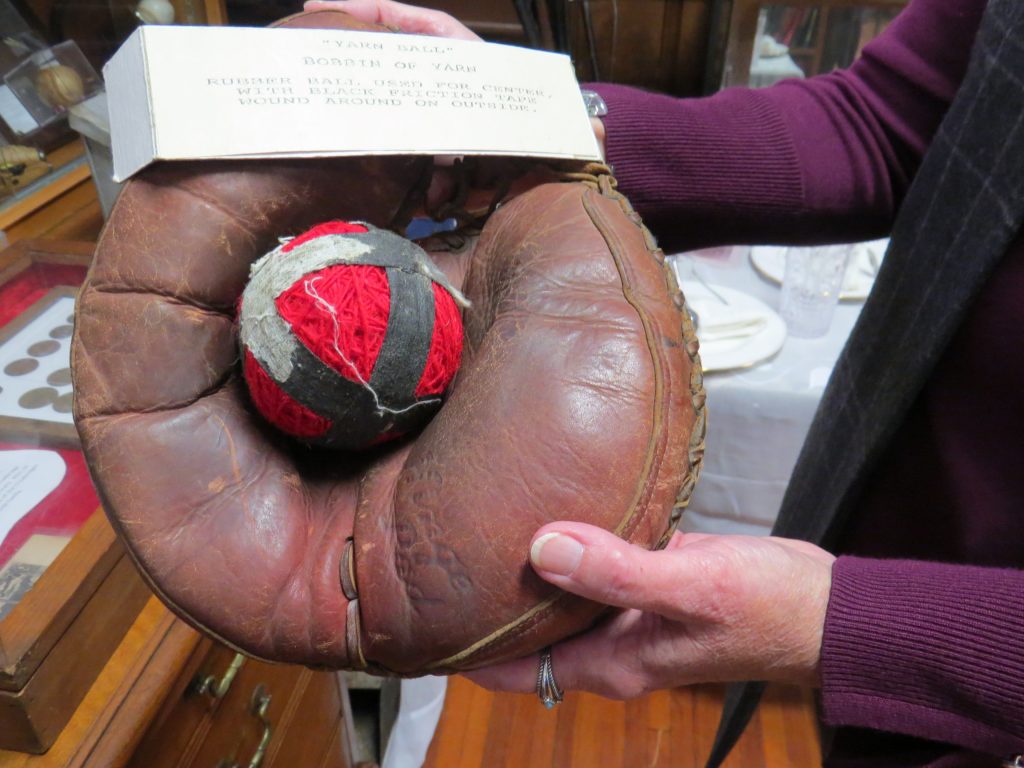 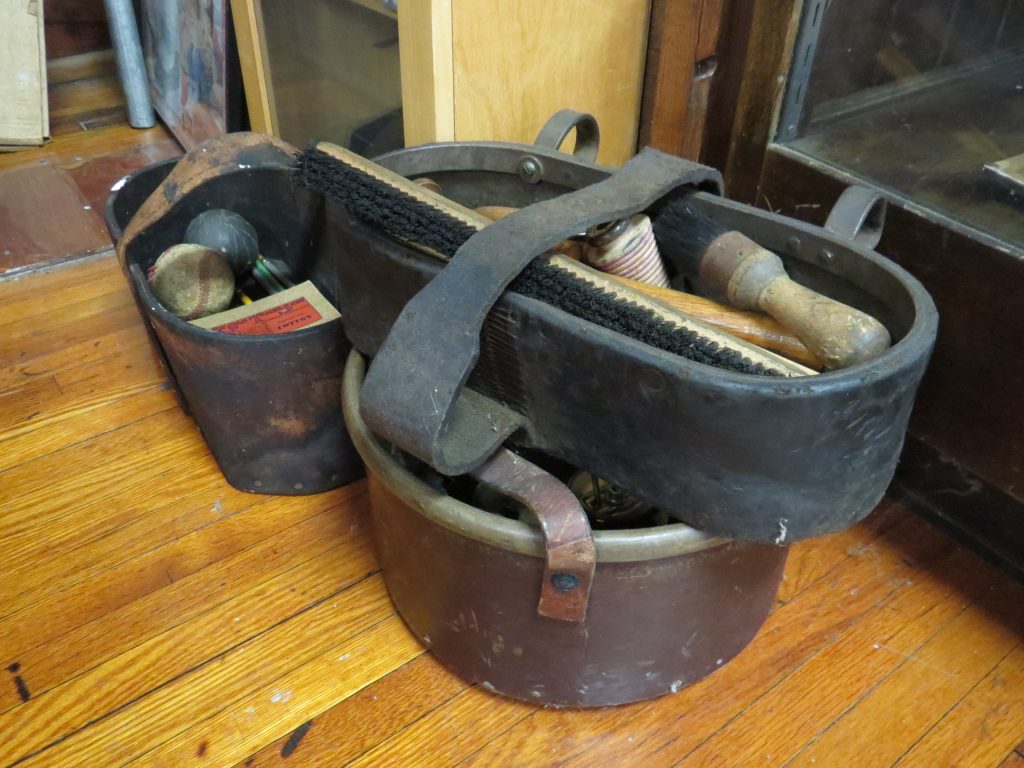 Recent economic development announcements have created excitement in Piedmont and given rise to events like the second annual Discover Piedmont Day scheduled for Saturday, March 7, from 9 a.m. until 7 p.m. The event will include a basketball tournament in the Piedmont Community Building’s historic gymnasium, gospel singing, crafts, food trucks and more.

“This place was once full of activity almost all the time,” Peden said. “We want to see people downtown again.”

Piedmont’s history museum is open every Tuesday from 10 a.m. until 6 p.m. and during special events in the Piedmont Community Building where it is housed at 1 Main Street, Piedmont SC 29673.