‘Myrtle the Pink Elephant’ signs off in Spartanburg

A fixture in Spartanburg now has a new home in Tennessee. (Source: Facebook / Myrtle the Pink Elephant)
FacebookTweetPinLinkedInEmail

SPARTANBURG, S.C. (WSPA) – Thursday marked a milestone that many hoped would never happen – the departure of Spartanburg’s beloved “Myrtle the Pink Elephant.”

Myrtle is a life-sized fixture made of fiberglass that people could rent to surprise and celebrate loved ones.

Jackie Forrester says 20 years ago her father came home with the big surprise that you couldn’t miss.

“We fell in love with her,” she said. 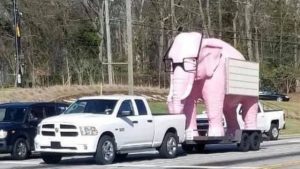 A fixture in Spartanburg now has a new home in Tennessee. (Source: Facebook / Myrtle the Pink Elephant)

Forrester says her dad bought “Myrtle the Pink Elephant” to advertise the family business. However, overtime Myrtle became a fixture at birthday parties, retirement celebrations and made occasional appearances for important life milestones.

“People in Spartanburg have just grown to love her,” Forrester told 7News.

“You met your wife because of Myrtle the Pink Elephant?” Asked 7News Reporter Stefany Bornman.

“That’s right,” Casey laughed. “My wife was looking to move either to Asheville of Spartanburg for a job. She ended up seeing Myrtle in Spartanburg and she knew it was a sign for her to move down here.”

6 years later, Casey says even his kids know about Myrtle – the elephant that’s become like family.

“Heartbreaking for my wife, for sure.” Casey told 7News.

Forrester says she didn’t find out her dad sold Myrtle until minutes before the new owner drove off, but she understands why he did it.

“My dad is older and he had always pulled it with his truck, which took a turn for the worst. It bit the dust and he traded it for a smaller car,” Forrester said. “So [he was] having to depend on others and their time to deliver it. There were times that he was panicked, that he wouldn’t be able to get it delivered.”

Myrtle was sold to the General Manager of University Motors in Chattanooga, Tennesse. Kevin Blum say she drove down to pick her up on Thursday. Blum tells 7News their brand is a pink elephant, so it made sense to aquire Myrtle.

Now the spot where the Sparkle City icon sat for the last 10 years will sit empty. Forrester jokes it’s a mourning site of the former Spartanburg staple.

Myrtle may be gone, but memories last forever. Forrester says her family wants to hear what memories people have of Myrtle by posting on her Facebook page here.

The new owner says you can keep up with Myrtle’s adventure on their website here. He tells 7News that people are more than welcome to visit Myrtle at her new home on Lee Highway in Chattanooga.

Myrtle was hard to miss.

The life-sized pink elephant made of fiberglass made her way around Spartanburg County for many years, with a sign announcing birthdays, graduations, retirements and other milestones.

“Myrtle the Pink Elephant” was a fixture.

Her former owners announced the move in a social media post.

“It’s with a heavy heart that we announce that Myrtle is headed to her new home in Tennessee. She will be greatly missed by this family and all of our friends. Many milestones have been announced by Myrtle, many graduations, many wedding proposals and a few promposals,” a post on the Facebook page named for the pink pachyderm reads in part.

They remembered the smiles Myrtle brought to faces and sadness over her move.

One woman wrote: “Crazy long story but she’s a big reason I moved to Spartanburg from Virginia. She was a sign. (No pun intended) I was planning on renting her for my 30th birthday this October.”

She wasn’t the only one. Another commenter said he never would have met his wife if not for Myrtle.

Another said there were many days that Myrtle was the “only bright spot” in life when she moved here.

7News is told the decision to sell Myrtle was made because the former owner no longer had a truck to haul her to events and announcements. It was more difficult to take Myrtle to different spots. And to keep from spoiling the surprise, they had to find people willing to move Myrtle at odd hours.

Myrtle’s new home is at General Manager of University Motors of Chattanooga in Tennessee.

Do you have a memory tied to Myrtle? Share your story with us on our Facebook page!