Learn about landmarks around the Upstate AND have a chance to win $500 in the Livin’ Upstate Landmark Challenge.

It’s Day 12 of the challenge, which means you have two days left to play. Entering is easy. Each day, June 1- 14, a picture of a local landmark is posted on livingupstatesc.com in a hidden area. Once the picture is located, entrants click on the picture and will be led to the entry form.

Entrants must include their name, phone number and e-mail address in order to enter. Incomplete entries will not be considered. All entries must be received by June 14, 2019 at 5:00 p.m. 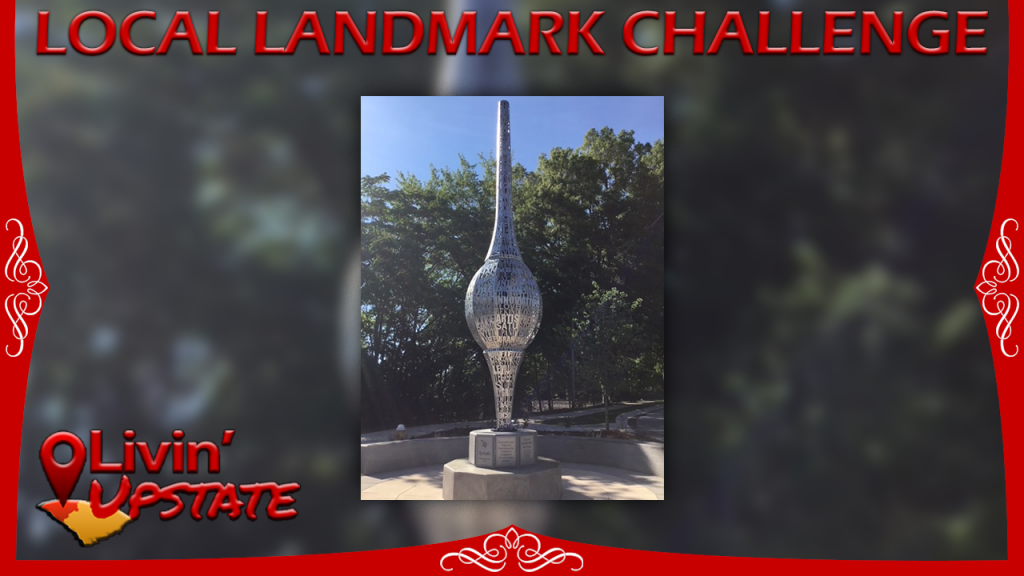 Day 1:  Spindle – Greenville, SC
Spindle is a work of art that acknowledges the importance of West Greenville’s textile heritage along with the Upstate’s 20th century designation as the “Textile Capital of the World.” It honors the manufacturing community that was instrumental in the Village of West Greenville’s artistic renaissance. 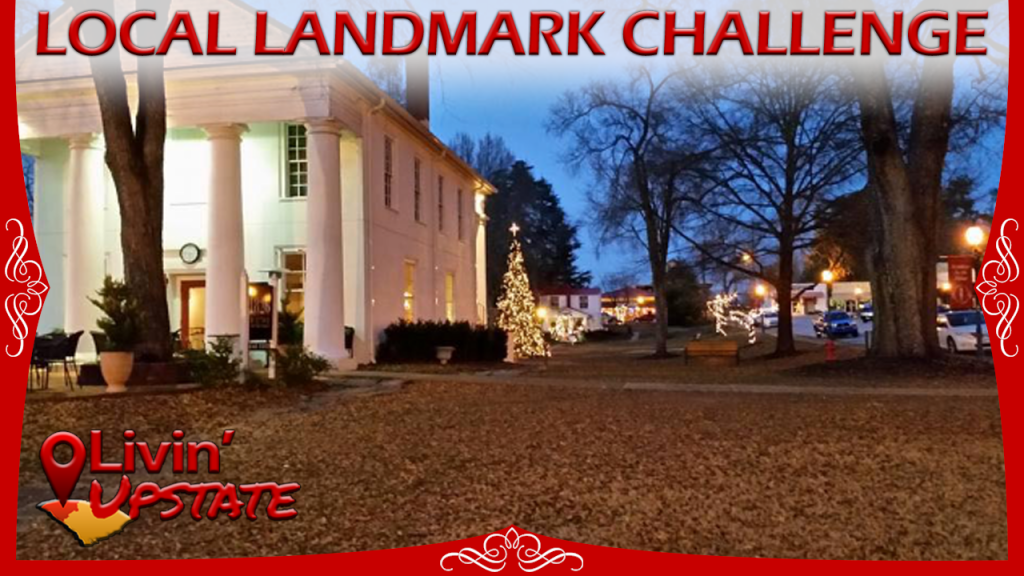 Day 2:  Farmers Society Hall – Pendleton, SC
Begun in 1826 and completed in 1828, Farmers Society Hall in Pendleton, SC is a two-story Greek Revival building on Exchange Street that served as the centerpiece of downtown. The first floor was originally used by the U.S. Postal Service and has since been converted into a popular restaurant called 1826 on the Green. Area farmers still use the second floor for events, making this building the nation’s oldest farmers meeting hall in continuous use. 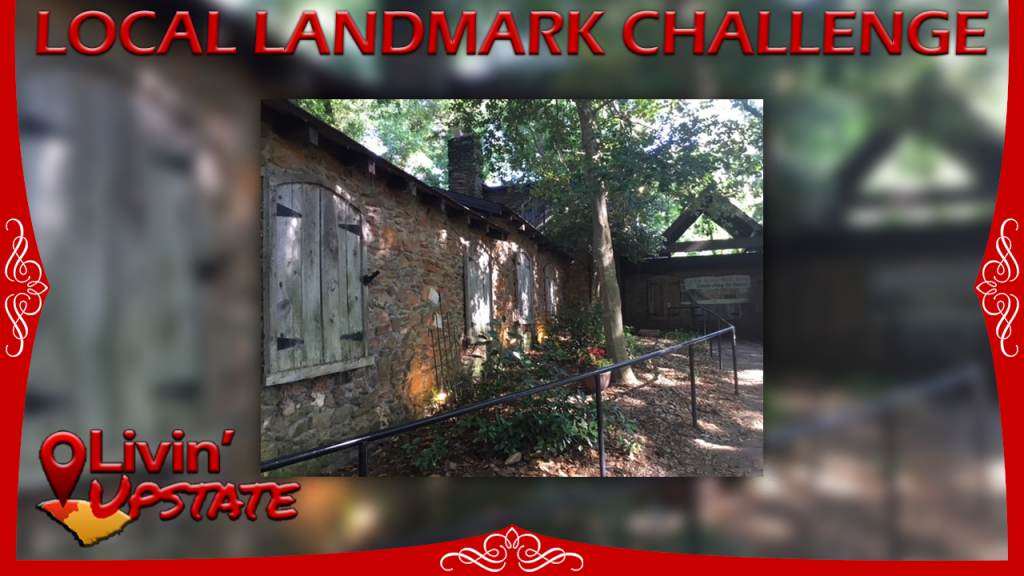 Day 3: The Peddler – Greenville, SC
This Greenville landmark built 100 years ago was originally known as Dreamland, a popular recreation area offering swimming, dancing, picnicking, golf, bowling and skating. It is rumored to have been a speakeasy during the days of Prohibition and a popular dancing and dining spot from the late 1940s until the late 1950s. It has been The Peddler, one of Greenville’s most popular steakhouses, since 1969. 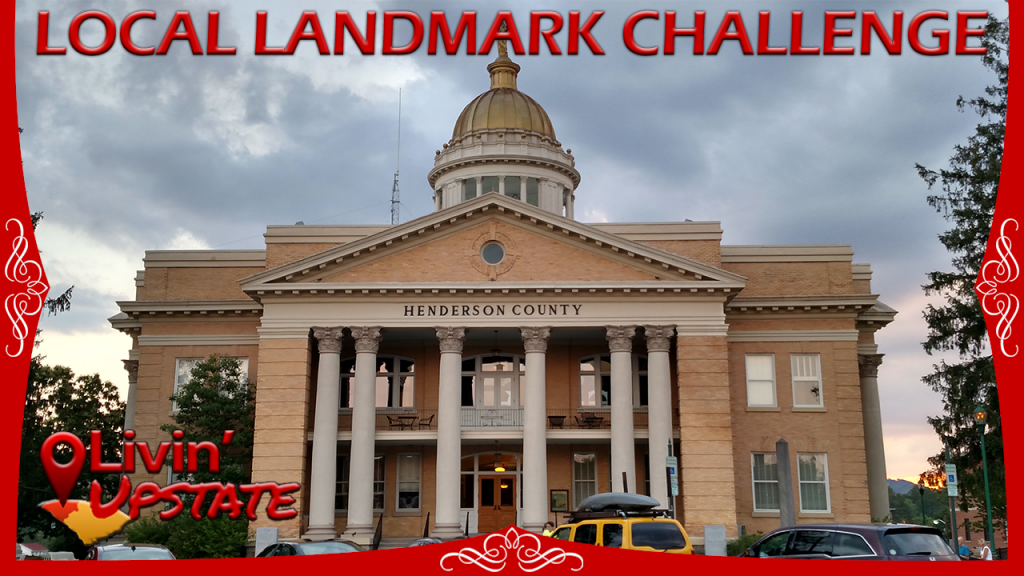 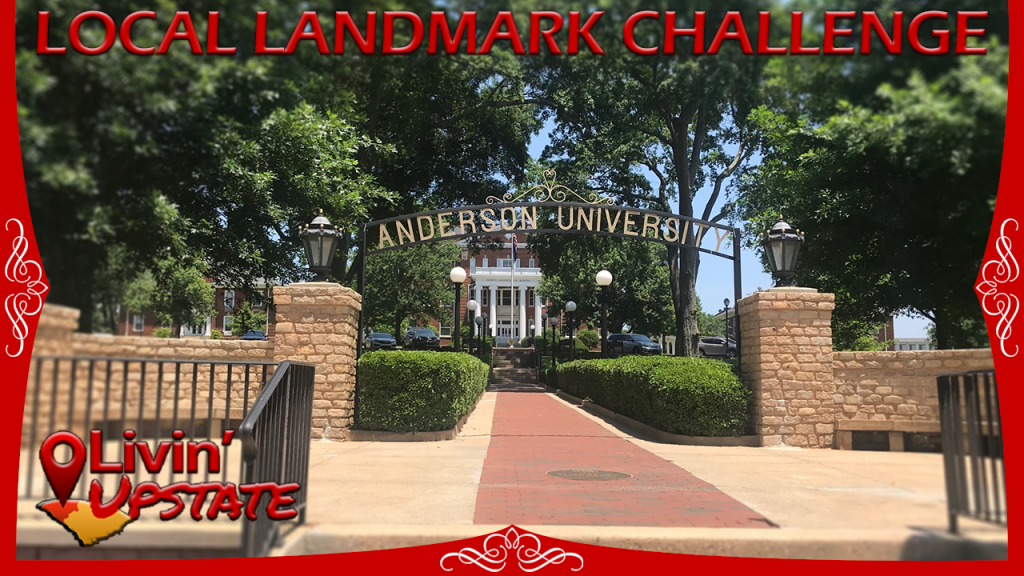 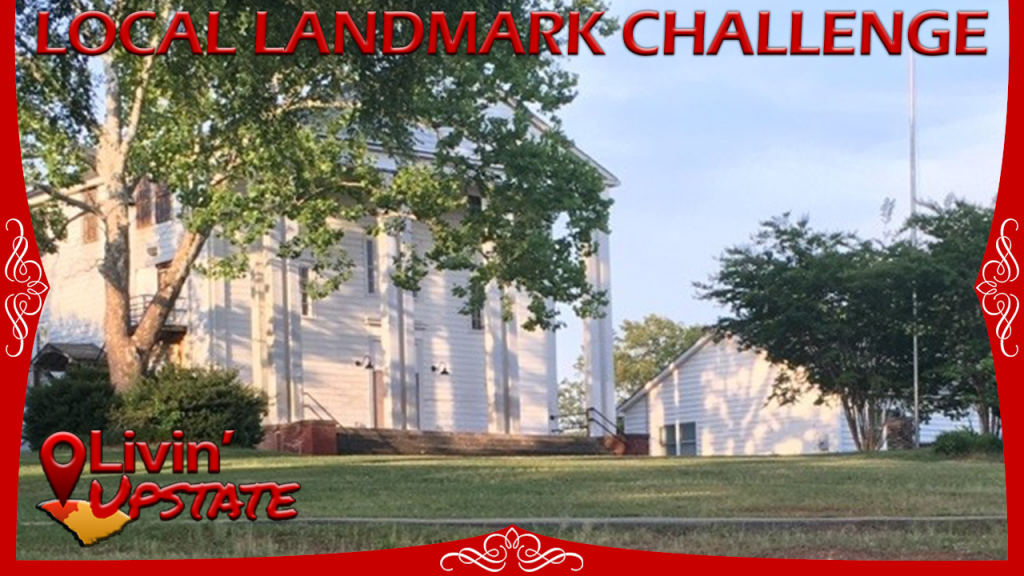 Day 6: Slater Hall – Slater, SC
This building in northern Greenville County opened in 1934 and served as the center of community activities. The bottom floor housed a large gymnasium/auditorium where movies were shown twice each week, and where the nearby mill’s basketball teams practiced and played. The company’s Christmas and Halloween parties were held there, along with concerts and school plays. 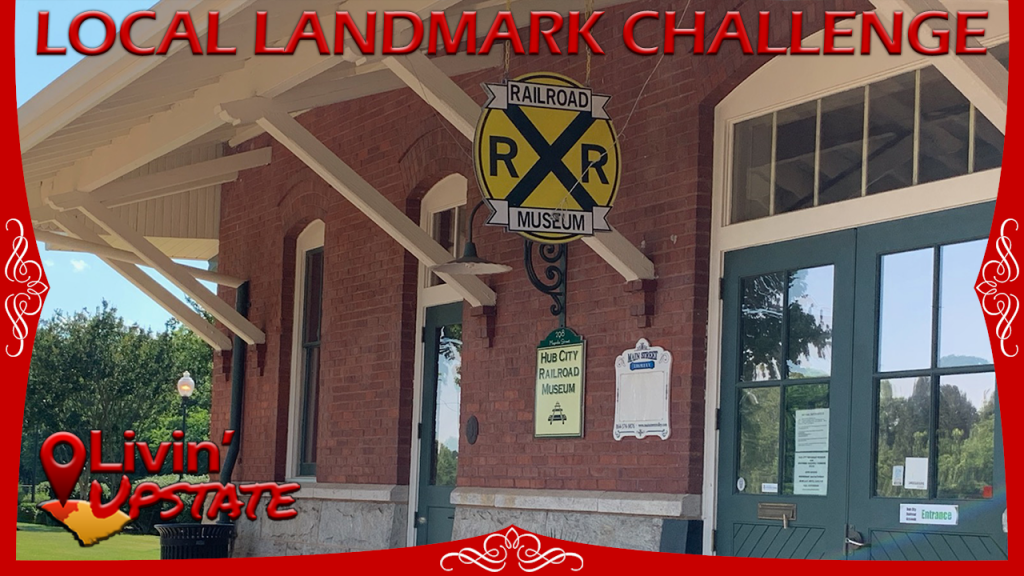 Day 8: The Peachoid – Gaffney, SC
The Peachoid is a 135 feet tall water tower in Gaffney, SC that resembles a peach. The shape of the peach was selected because the Gaffney economy was then dependent upon peach orchards, and because the people of the town wanted to make clear that South Carolina, and at one time, Cherokee County alone, where Gaffney is located, produced more peaches per year than the entire state of Georgia (known as the “Peach State”). 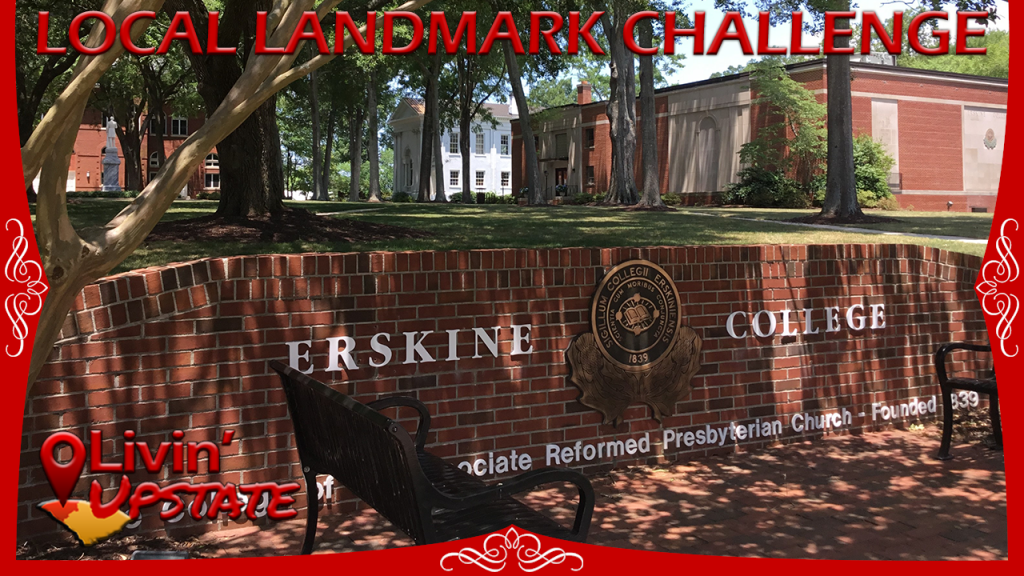 Day 9: Erskine College – Due West, SC
Erskine College is a private Christian college in Due West, South Carolina. Founded in 1839 by the Associate Reformed Presbyterian Church, the college offers undergraduate degrees in the arts and sciences, and a graduate theological seminary. 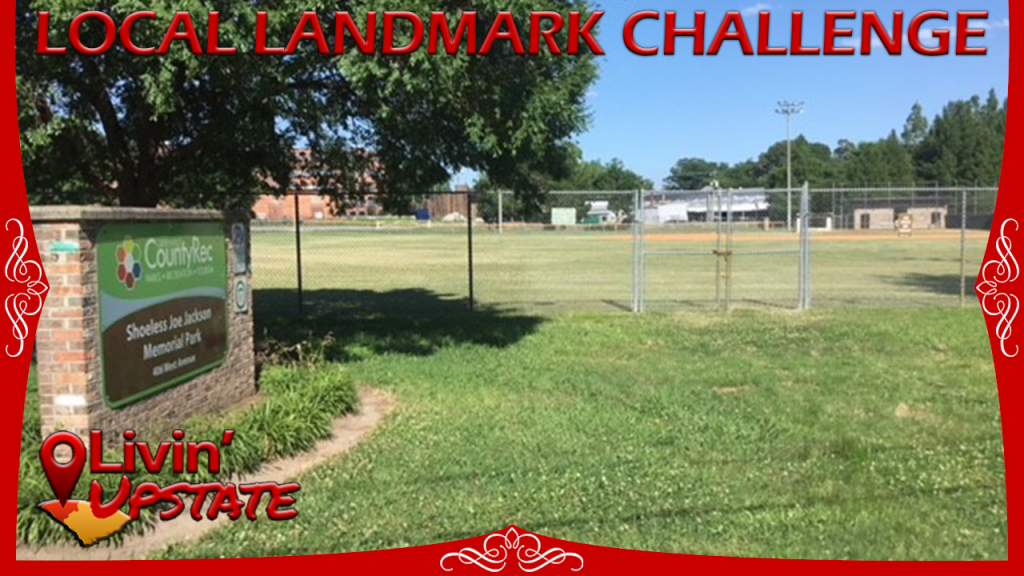 Day 10: Shoeless Joe Jackson Memorial Park – Greenville, SC
This historic park located on Greenville’s Westside in the Brandon Mill Community honors Greenville’s rich baseball history. The original park/ball field was home to mill workers who played baseball and competed against other mill teams across Greenville County. Shoeless Joe Jackson grew up in Brandon, played for the mill, and is eulogized today as one of most talented players in major league history. 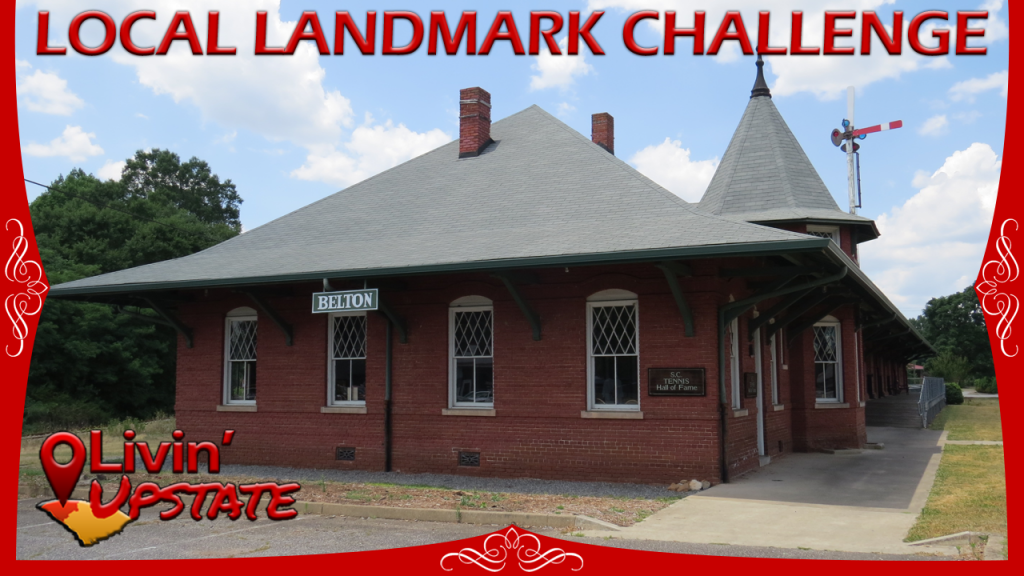 Day 11: Belton Depot – Belton, SC
The Belton Depot was constructed by the Southern Railway company around 1910 and was listed in the National Historic Register in 1979. Located near the town square, the depot today is the home of the Ruth Drake Museum and the South Carolina Tennis Hall of Fame Museum.

Day 12: Liberty Bridge – Greenville, SC
Greenville’s 345-foot long suspension bridge overlooking downtown’s Reedy River Falls is the iconic centerpiece of Falls Park. While bridges with similar structural concepts have been built in Europe, this bridge is unique in its geometry and there is nothing like it in the United States.