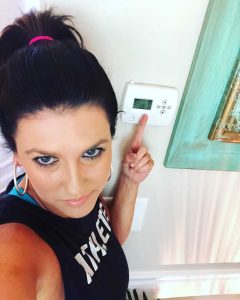 It’s a debate happening in households all across the Upstate. What’s the perfect temperature to keep your thermostat set to in the summer? I prefer around 67-68. My husband says our house can’t get that cool and our system will just run and run and run all day. So he keeps it on 74 and then will lower it a little at night. I’ve also heard you really need to have your system checked a couple times a year. So I decided to kill two birds with one stone and bring my friends from Davis Services over to help answer the age old question and see how my air units were holding up. Here’s how it went down. 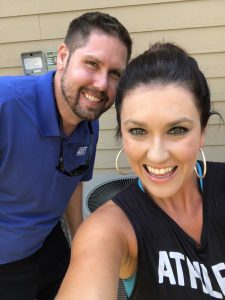 I called Davis and set up an appointment for 2:00 on Friday afternoon. At exactly 2:00 Richard Crabtree from Davis came over. He was very friendly and introduced himself to me and my 4 year old Griffin. I invited him inside and he took off his shoes and put on little booties so he wouldn’t track in anything. (He wasn’t aware of my obsession with sweeping and how I can’t stand to have anything on my floors so I immediately liked this guy.) With booties on he came in and checked my attic and then both thermostats. 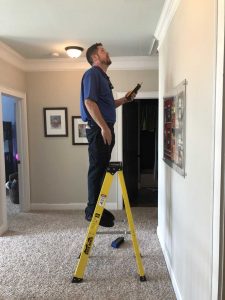 We have one downstairs in the living room and one upstairs in our bedroom. Then he went back to his truck and got his tools and went to work on the two units outside. I thought this would be a 15 minute check up. Oh no. He was so thorough! He seriously spent an hour…..in  95 degrees….on each unit. He asked me lots of questions, moved all the mulch off from around it and then took it apart and cleaned it. He used water and soap and wax and coil cleaner. (Whatever that is). While he was working I took the time to ask him tons of questions. 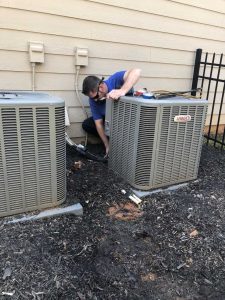 Megan: “Do you really need to get your units serviced like you do your car?” 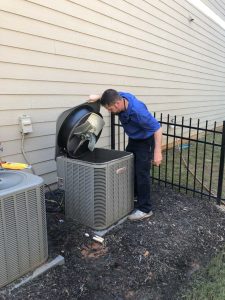 Richard: “Yes. I would recommend getting a cooling maintenance service and then 6 months later do the same thing with your heater.” He said by doing that you can catch a small problem early instead of having to wait 6-7 hours if there’s ever a problem. (And when it’s 100 degrees outside even being without air for an hour is tool long of a wait for me)

Megan: “What are some of the reasons our units stop working?”

Richard: “The main issues come from fan motors, leaking coils and dirty filters.” He recommends changing your filters once a month. I thought we did ours monthly but apparently we hadn’t changed them since March. It’s now July. Ew!

Megan: “If I keep my air temp cool should I still run my fan?”

Richard: “Yes. A ceiling fan makes a big difference.” In fact in the winter when it’s cold reverse the spin and it’ll help keep it warm inside. 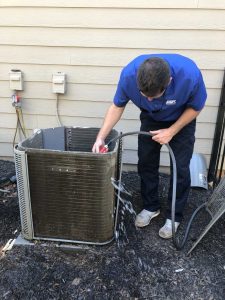 I had no idea how dirty our units were. I mean they’re outside so obviously they’re going to get dirty but two things that can make a difference are to make sure you mow away from your unit so the grass and debris doesn’t get sucked in and make sure to keep the area around your unit un-covered. We had a bunch of mulch covering it so Richard did a little re-landscaping for us.

Finally I had to settle the debate.

Megan: “If I want it to stay cool in here all the time can’t I just turn it to 68 and call it a day or will it never be able to cool it that much?” Richard was trying to be PC to me but did in fact side with my hubby. (Rats) He said a good system should be able to keep it comfortable when it’s blazing hot outside and that’s usually about 20 degrees cooler. (So if it’s 90 outside my house should feel like 70) He suggested not jacking it way up during the day because then when you get home it’ll be hot and it’ll take a long time to cool off. He agreed with turning it up a few degrees during the day and then lowering it at night when it starts to get darker. Keeping your blinds closed and of course your doors will also make a difference.

At the end of the visit he wrote up all his findings and even let the 4 year old “inspect” the air quality. 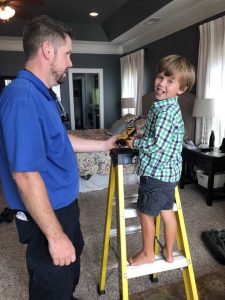 If you’re looking for a new system or if you want to make sure yours is in good shape give them a call. Tell them Megan and Griffin sent you. 864.397.8513 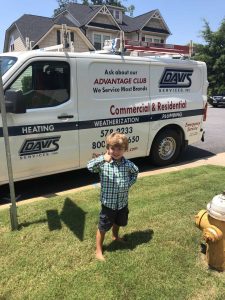