BlocHaven, one of the largest climbing gyms on the East Coast, opening in Greenville in June

The idea for BlocHaven was born four years ago when Doug Johnson and his family moved to Greenville after stints in Seattle, Washington DC and Atlanta. When the 25,000-square-foot rock climbing facility opens in June at Judson Mill, it will be one of the largest climbing gyms on the East Coast and hopefully the site of future national and international climbing competitions.

“This has been a dream of ours for the past four years,” Johnson said. “I’ve been in business for the past 30-plus years in software, in technology. I’ve started four different companies from scratch, but they’ve all been software companies. So, four years ago we started talking about what it would be like for us to start a business as a family.”

Johnson, his wife and seven children all are passionate about rock climbing. Four of the Johnson children are into competition climbing, with daughter Audrey placing tenth in the world in speed climbing.

“I tell people that I’m the ninth best climber in the family,” Johnson said. “Even the seven-year-old is better than me now. I’ve spent a lot of time holding the rope.”

It’s those family experiences that guided the layout and design of BlocHaven, right down to the materials used for construction. And a career in technology has given Johnson’s new climbing gym a state-of-the-art feel.

“Having been a coach and a (competition) judge, as well as a Dad, at these events, I’ve spent a lot of time inside climbing gyms crowded together with a bunch of people and thought, ‘There’s got to be a better way to do this.’”

While most facilities place their climbing surfaces against the walls with a large vacant area in the center, BlocHaven “boulders” are in the center of the facility with lanes around them for easy traffic flow and better views. There’s even an observation deck where spectators can view activity at the competition wall, which has six unique climbs for a finals-level event.

Simulated boulders inside the new facility were crafted by Salt Lake City-based Vertical Solutions using premium Canadian Burch with Walnut inlays. One boulder dubbed The Bear has various angles that require good balance along with strength. The Titan, designed to be the centerpiece of the gym, is a 45-degree wall with a 7.5-foot arch in the middle. 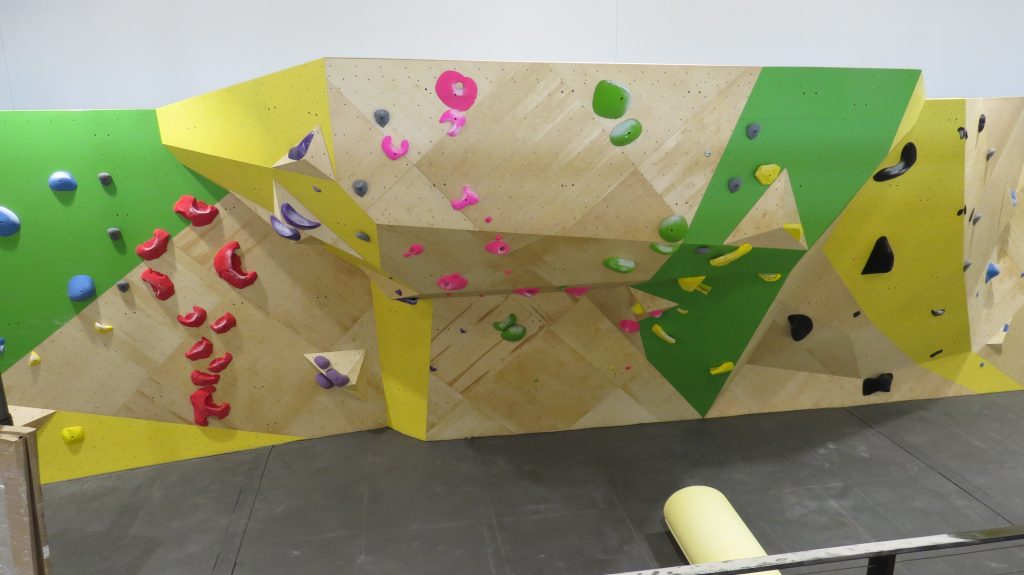 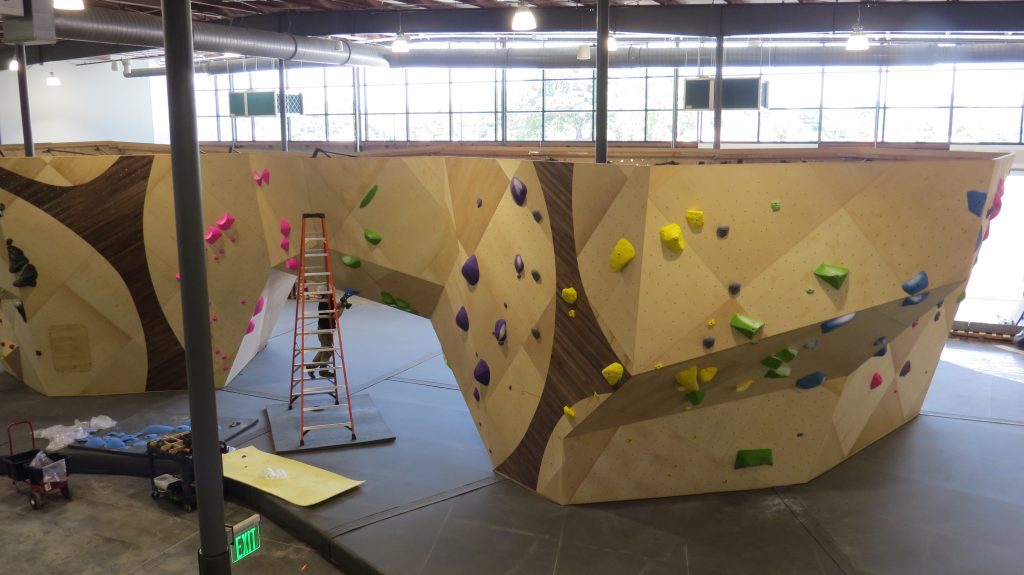 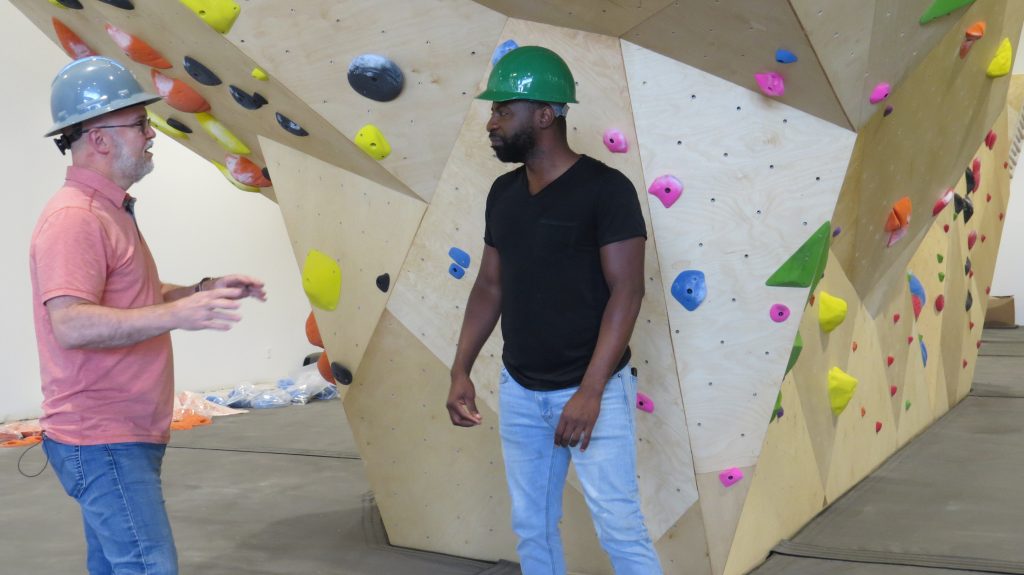 “It was very important to us to have people that build with high quality and build consistently,” Johnson said. “I’ve been able to climb in (Vertical Solutions) gyms all over the U.S., so whether it’s the walls or the floors, these guys do the whole thing.”

BlocHaven also features a training area where climbers can strengthen their core, upper bodies and even their fingers.

A campus board features grips with varying shapes and depths. Designed for hands-only climbing, the board builds strength and flexibility.

The training area also has a symmetrical board that allows climbers to train for certain situations such as a hard reach to the upper right or upper left. Then there’s a Kilter board that tilts from straight vertical to 60 degrees and lights the holds along a path selected via an app. 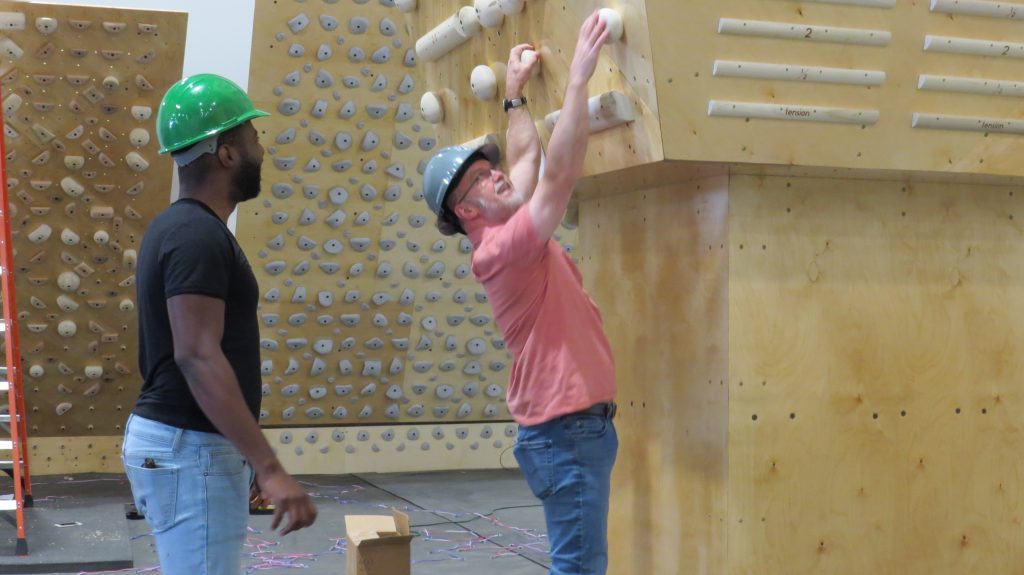 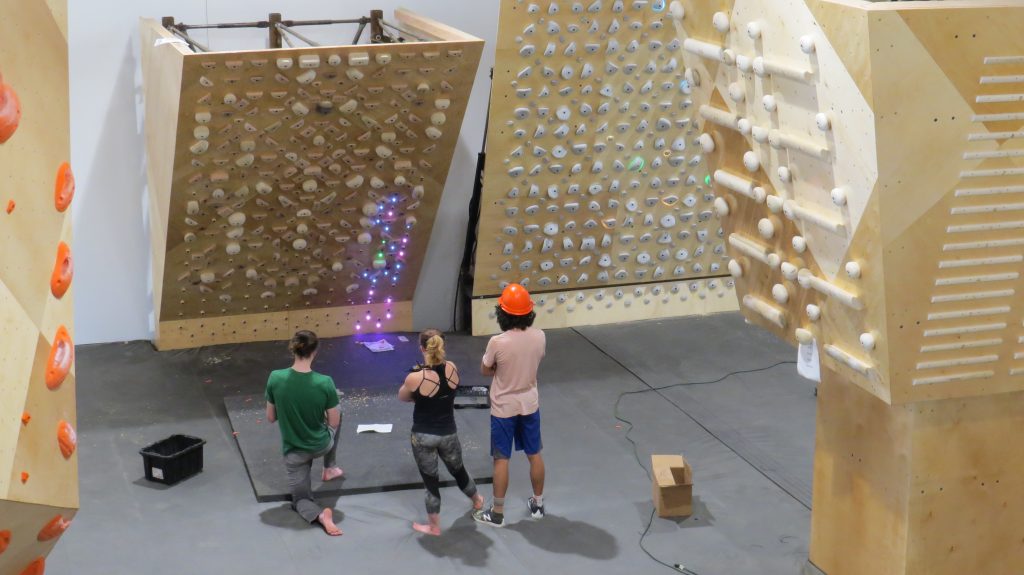 “You can practice the same problem as one of your friends in Germany,” Johnson explains. “There’s an app on your phone that allows you to say, ‘I want to do this climb at 20 degrees,’ and the board will adjust to it.”

And while all of this may sound like a setup for an experienced climber, Johnson said BlocHaven is a place for all climbing levels. Beginner climbs scattered throughout the gym are designated by red holds. The facility also will have a bouldering league with multiple levels of climbers, led by staff members who all have coached youth climbing teams.

For those looking for a great form of exercise, rock climbing employs overall core strength, leg strength and upper body strength, according to Johnson.

“There is a wide range of (climbing) levels represented here,” he said. “Beginners coming into the gym that might be intimidated by all of this, you can grab a red climb and climb it.”

Monthly and annual memberships are available online. Day passes may be purchased by non-members once the gym opens. Climbing shoes are available to rent.