Editor’s Note:  This story was originally published in August 2019. We’re reposting it with a few edits, including revised hours of operation, in celebration of the 70th anniversary of  Ayers Leather Shop, Greenville’s second-oldest downtown retailer.

Joanne Woodward, Roberta Flack and Liberace have shopped here, along with several Miss South Carolinas, a Miss America and even Santa Claus.

But 70 years of success at Ayers Leather Shop has come from a loyal Upstate customer base and a growing group of tourists in search of something uniquely Greenville.

Celebrating its 70th anniversary in August 2020, Ayers is the second-oldest downtown retailer in Greenville behind the Greenville Army & Navy Store. As its name implies, Ayers specializes in the sale, repair and restoration of all things leather. It is an authorized repair specialist for major luggage brands such as TravelPro, Atlantic and Delsey, and offers the nearly lost art of monogramming on leather.

But Ayers is just as well-known as a spot to find ‘statement’ umbrellas, artistic birdbaths, and the Fisher Space Pen, the pen that writes in zero gravity, upside down and has been used on all manned space flights since 1968. 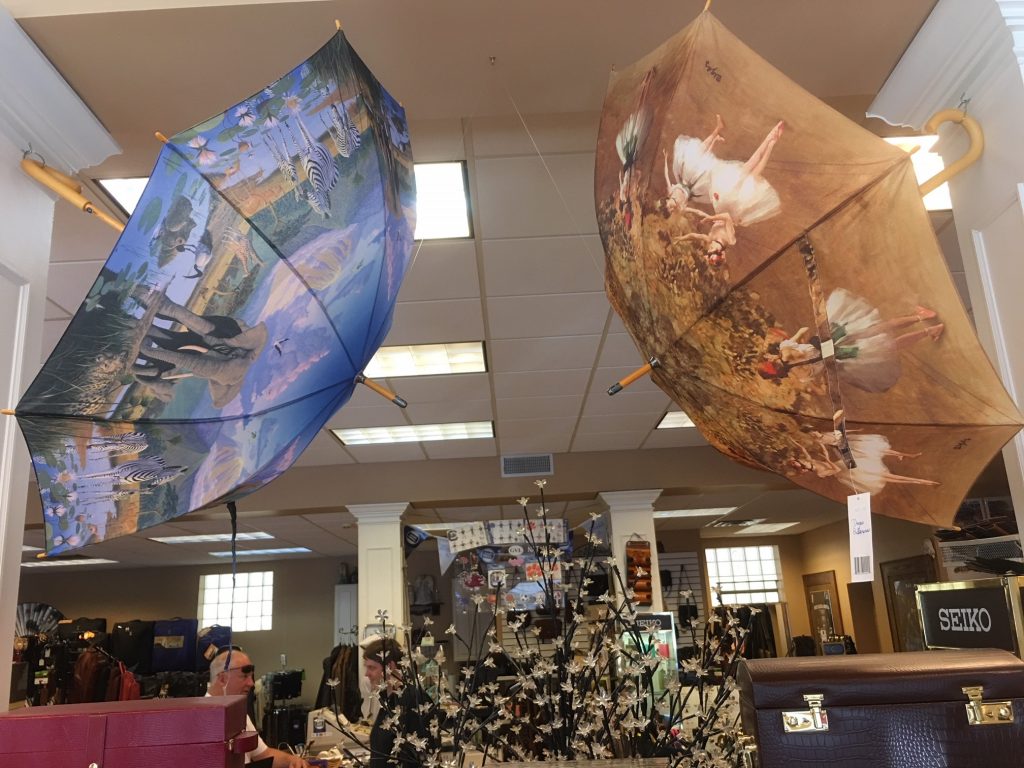 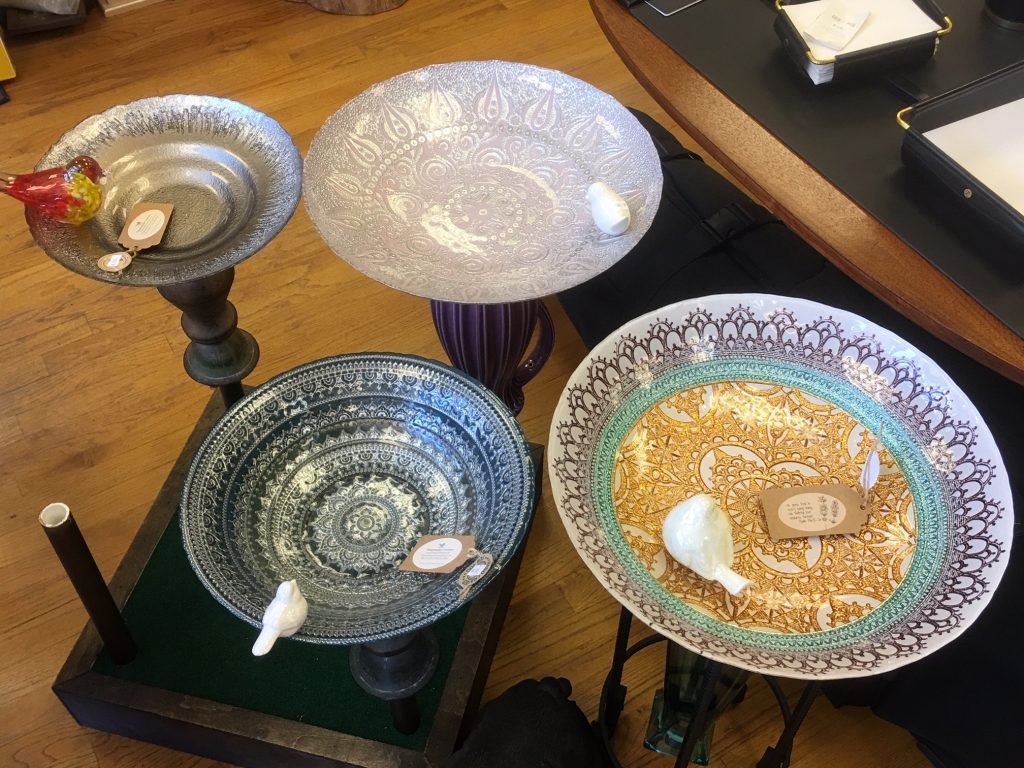 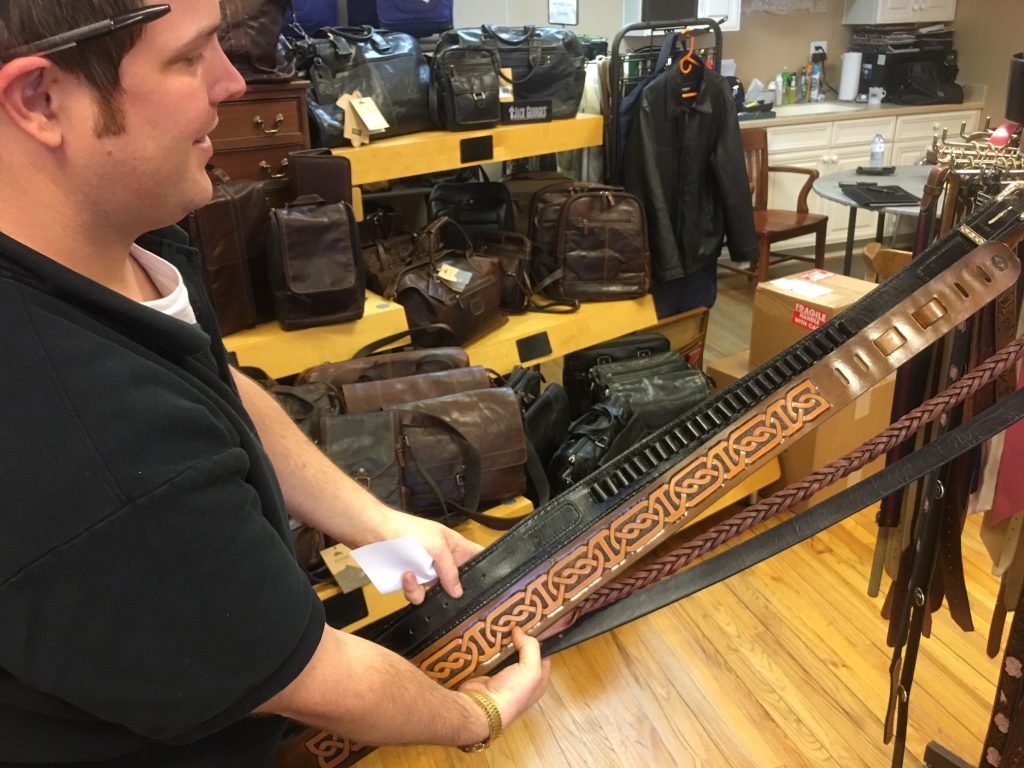 “The Ayers Leather Shop story is the great American story,” says Deb Ayers Agnew, daughter of Elrod and Charlotte Ayers who opened Ayers Leather at the corner of Washington and Irvine Streets in 1950.

After suffering disabling injuries during World War II, Elrod was trained in leather crafting and went to work for a leather repair shop in Atlanta. Wanting to open a store of his own but not wanting to compete with the owner of the shop where he worked, Elrod and Charlotte brought their expertise and entrepreneurial spirit to Greenville, South Carolina.

“They moved to Greenville — where my mother had family — with $500,” Agnew said. “After they spent $450 on tools, rent and advertising, there was $50 left the day they opened the store.” 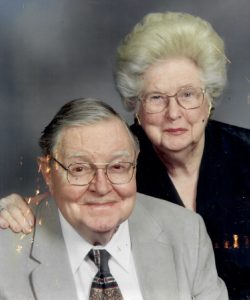 Elrod’s knowledge of leather goods and his experience in repairing everything from handbags to luggage made Ayers Leather Shop the go-to for area businesspeople and those looking for uncommon and personalized gifts for graduations, weddings, retirements and other special occasions.

At one time, Ayers had stores in McAlister Square and Haywood Mall in addition to its downtown location. “Back then, downtown served as a cheap warehouse for our mall stores,” Agnew said.

Remaining loyal to its downtown roots, Ayers moved up and down Main Street over the decades, weathering economic highs and lows until downtown Greenville would return to its glory days. From its original location on Irvine, Ayers moved alongside the Poinsett Hotel in 1952 and remained there until the iconic hotel closed in 1973. A third move took Ayers to the corner of N. Main and W. North Streets until it moved in 2015 just steps off Main Street to its present location at 24 W. North Street.

“We’ve experienced the prosperity, the death and the rebirth of downtown Greenville,” Agnew said. “It’s amazing that today in downtown, almost any day of the week, even the side streets are alive with Greenville natives, newcomers and visitors.” 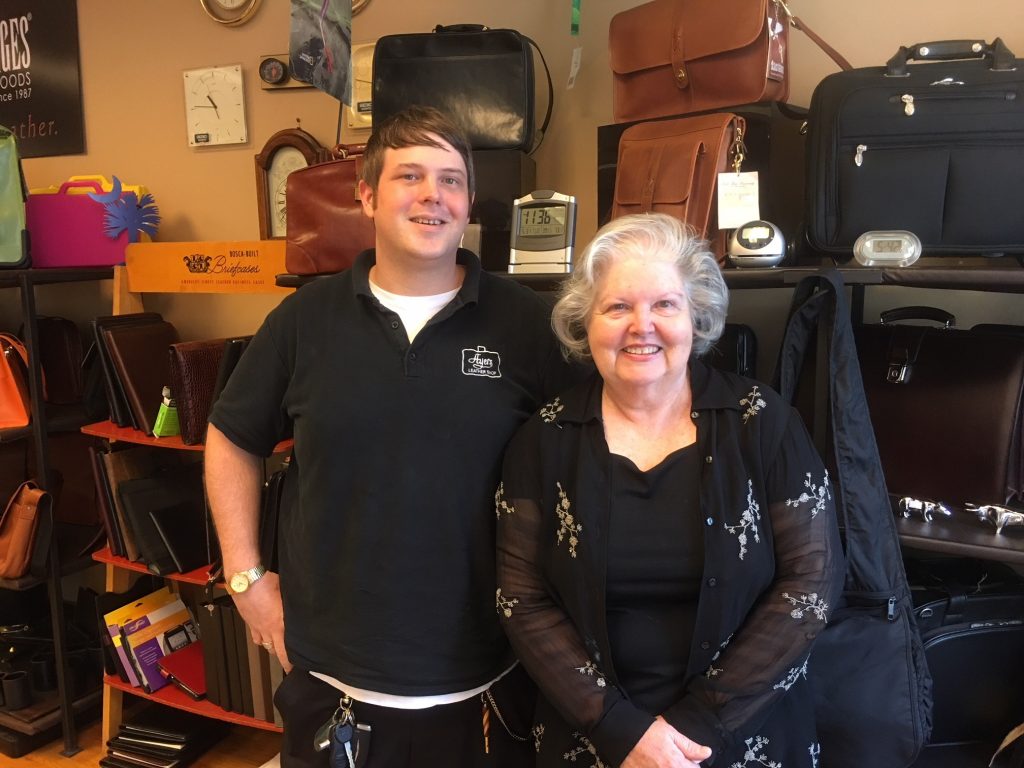 “I grew up around the business and developed a real appreciation for leatherwork and for the niche business my grandparents and parents built,” the younger Agnew said. “We’ve been blessed over the years with loyal customers, a supportive community and the ability to evolve with the times.”

Now a master leathercrafter himself, Payton has assumed the role of leather repair specialist at Ayers Leather Shop. He has restored a 100-year-old fire bellow, decades-old briefcases and even altered Santa’s belt.

“The Santa for autistic children in the Upstate lost about 60 pounds and needed his belt cut down,” Payton explained with a chuckle. “It’s not every day you see Santa walking into your store.”

As he introduces Ayers Leather Shop to a new generation of Upstate residents and visitors, Payton holds fast to the traditions established by his grandparents. “We operate with faith and ethics, offering services no one else wants to, and items people want and can’t find anywhere else.”

After almost seven decades, the legacy of Elrod and Charlotte lives on.