The Anderson International Festival, GermanFest, begins next week with a kickoff event at Anderson Arts Center followed by a series of countywide activities held through March.

GermanFest kicks off on Tuesday, January 4, at the Anderson Arts Center where guests will enjoy music by The Foothills Oompah Band, a food truck experience, and a pub crawl featuring downtown breweries and craft beer establishments. The event runs from 5 p.m. until 8 p.m.

From museum exhibits and fairy tale readings to book studies and German-inspired wine dinners, GermanFest will offer experiences for all ages through March 24.

“This year when Sister Cities decided to present the festival, we thought about what we need to emphasize in Anderson,” said Carol Burdette of Anderson Area Sister Cities Association. “There is a lot of German investment in Anderson County and the Upstate, so we landed on Germany.”

The Anderson International Festival began in 2006 with a Russian celebration, according to Sister Cities Association member Beverly Childs, who is director of the Anderson County Museum. Every two years since, there has been a countywide celebration featuring various cultures including France, Japan, West Africa and Celtic countries. 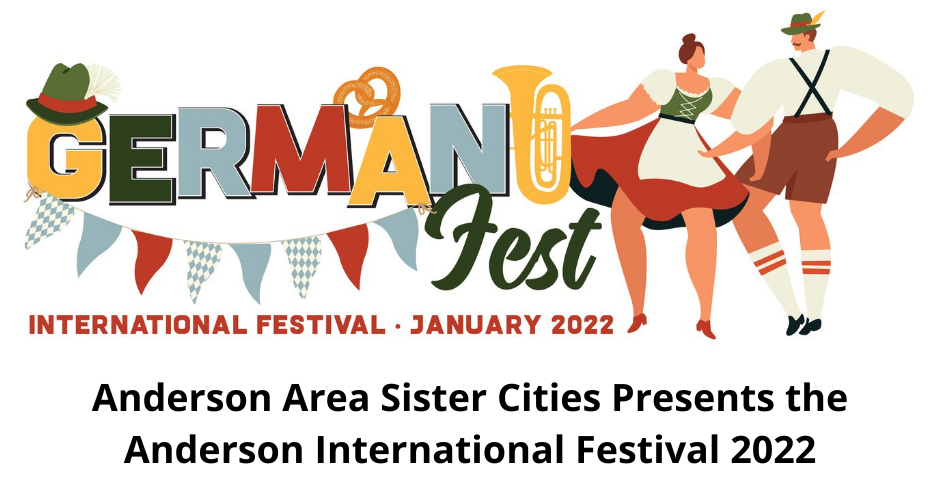 Here is a list of activities planned during GermanFest:

January 4, 5 – 8 p.m., GermanFest Kickoff, Anderson Arts Center
You’ll be entertained by The Foothills Oompah Band, have the chance to visit a local food truck, and pub crawl your way around downtown to our local breweries and craft beer establishments.

January 13, 5 – 6:30 p.m., GermanFest Exhibit Opening Reception, Anderson County Museum
Mapping It Out: The Von Hasseln Family and Anderson, SC. Many researchers know that J. H. von Hasseln created a most useful map of Anderson County in 1897. This exhibit will uncover the details of the von Hasseln family’s journey to the United States in the 1870s, the professions they worked in, and will even explore the process of creating the 1897 map. Enjoy German food and drink. Exhibit open until March 31.

January 18, 5:30 p.m., Anderson County Museum
Mary Koziar traveled all over Germany, collecting a variety of items including postcards, dolls, beer steins and many other items. Join Mary as she talks about her travels as a teenage girl through the German countryside.

February 1, 12 p.m., Lunch & Learn: Textile Mills in Germany, Anderson County Museum
John Rainey will share his knowledge of working in the textile mills in Germany. He will bring a variety of items made in the mills he visited while working in Germany.

February 15, 6:30 p.m., “The German Influence on Christianity”, First Presbyterian Church
Among the many cultures that have shaped Christianity as we know it today, few may surpass Germany. Though it often goes unnoticed, various moments and figures from Germany’s past have profoundly impacted the way Christians think about faith, the church, and even scripture. Lecture presented by Dr. Channing L. Crisler will be held in the Kirk Fellowship Hall.

March 15, 2 -3:30 p.m., Anderson University Professional & Lifelong Learning
Lecture: Life and Times of Dietrich Bonhoeffer, by Dr. Richard Burnett. As Adolf Hitler and the Nazis seduced a nation, bullied a continent, and attempted to exterminate the Jews of Europe, a small number of dissidents and saboteurs worked to dismantle the Third Reich from the inside. One of these was Dietrich Bonhoeffer, a pastor and author.