About 100 rising fourth graders in Anderson County will be attending a daylong reading camp this summer thanks to a new partnership between the United Way of Anderson County, the Anderson Area YMCA and Anderson School Districts Three, Four and Five.

Patterned after a successful program in Pickens County, Camp iRock includes transportation to and from camp, if needed; breakfast, lunch and snacks; reading instruction in a small group environment; swim lessons; field trips; and traditional summer camp games and activities.

“A child’s inability to read is a root cause of so many other issues in their lives, said Ala Chappelear, chair of the United Way of Anderson County’s Women United Council. “For many children, summer camp is a far-fetched idea. Many stay home all summer, and many stay alone all summer long. Camp iRock is not just a reading camp, it touches so much more.” 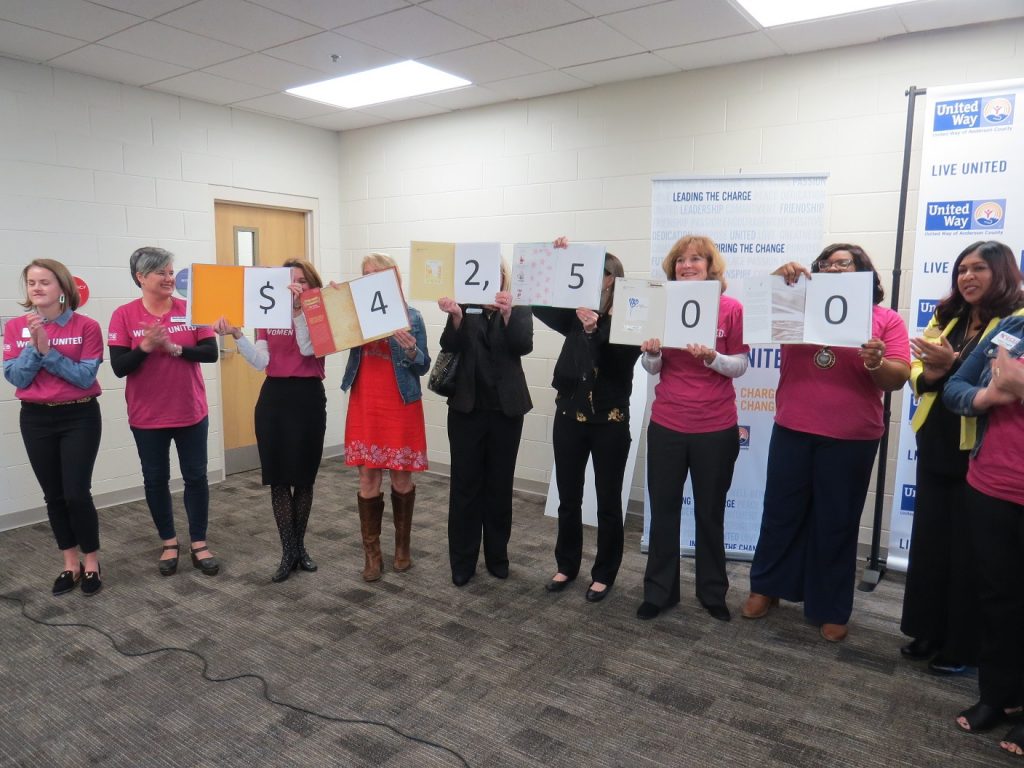 Unlike many other summer reading programs, eligibility for Camp iRock will be based on reading scores rather than household income levels, according to Carol Burdette, President & CEO of United Way of Anderson County.

During last week’s kickoff, the United Way announced that $42,500 has been raised to date for Camp iRock. Donors include the Rotary Club of Greater Anderson, Piedmont Natural Gas, Abney Foundation and an anonymous donor making a $20,000 contribution.

“We’ve been very aware of the success of the iRock camp up at Pickens County YMCA in collaboration with Pickens United Way and the Pickens School District,” said Joe Drennon, CEO of Anderson Area YMCA. “We are so proud to be a partner in this initiative and I see Camp iRock becoming a state initiative for all of our YMCA’s across South Carolina.” 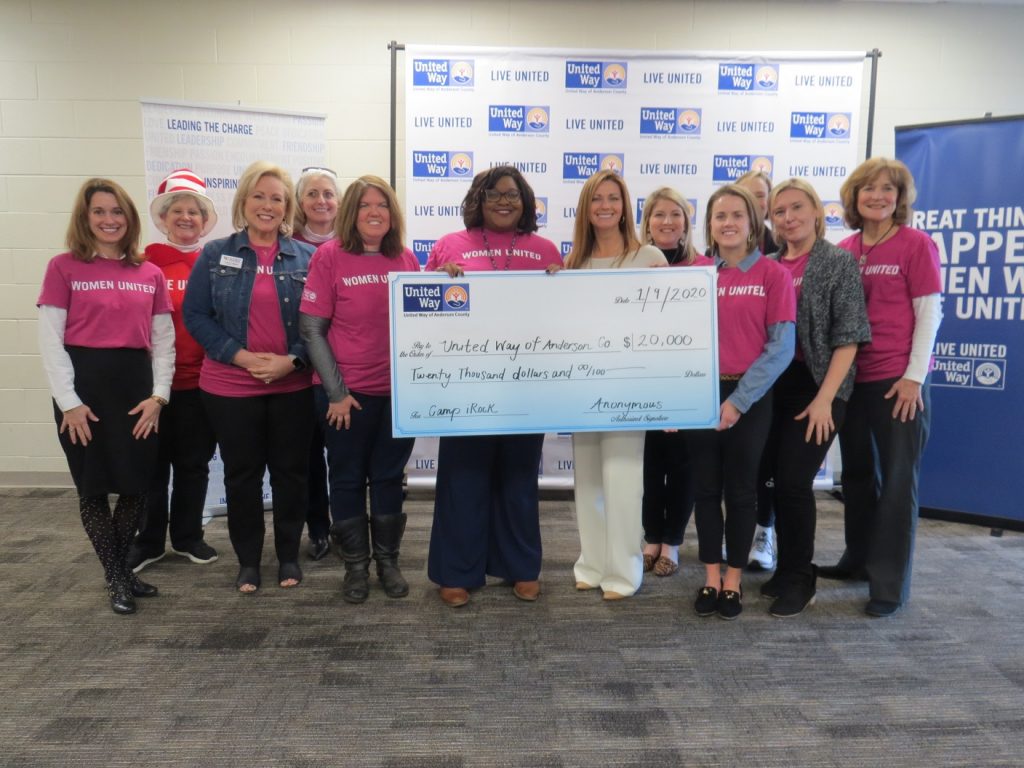 Women United members display a check from an anonymous donor. 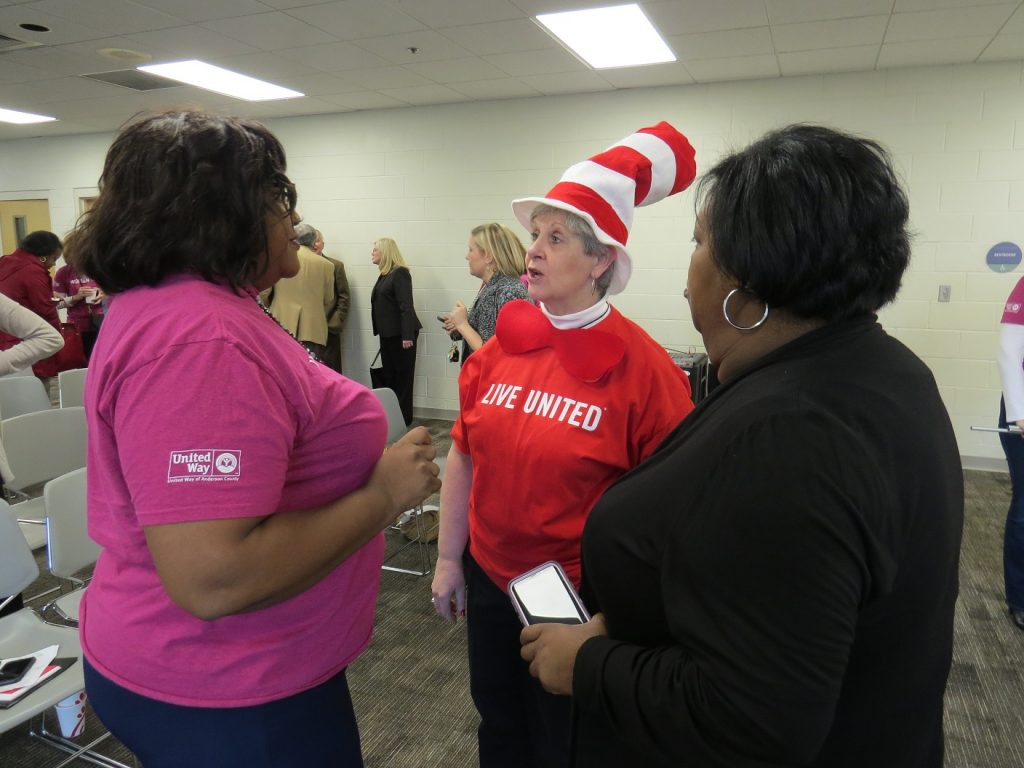 A major component of Camp iRock is free swimming lessons offered by the YMCA, Drennon added.

“In our close proximity to Lake Hartwell, so many children do not know how to swim so we feel like that is an important part of the camp,” he said.

Programs like Camp iRock are crucial for student retention, according to Dr. Tom Wilson, Superintendent of Anderson School District Five and current chair of the Anderson Area YMCA.

“The statistics are staggering,” Wilson said. “If a child is retained once, the chance of his or her graduation from high school significantly decreases. If they are retained twice, they’re going to drop out of school. That’s why we are so excited to be a part of this initiative. We’ve seen what collaboration can do in this county when people put their silos away and come together.”

The summer reading program is the second initiative undertaken by the United Way of Anderson County’s Women United Council, according to Burdette. The first tackled teen pregnancy in Anderson County, which has decreased by 60 percent since 2003.

The Women United Council selects areas of focus that are measurable, that address a root cause for other issues, and help reduce poverty, Burdette said.

For more information on Camp iRock or the Women United Council of the United Way of Anderson County, contact Mary Pat Smith at marypat.smith@uwandersoncty.com.